Review: The Viscount Who Loved Me by Julia Quinn 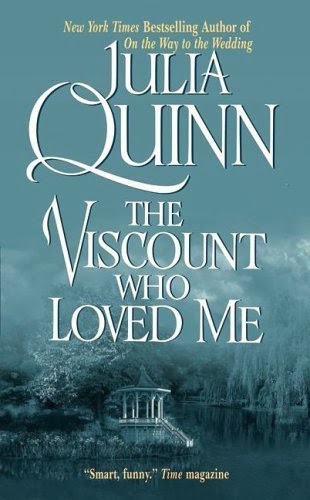 The Viscount Who Loved Me (Bridgertons #2)
By: Julia Quinn
Publisher: HarperCollins
ASIN: B000FC1PMK

At eighteen, Anthony Bridgerton -- the eldest of the expansive family's brood of eight -- assumed the mantle of leadership in his family following his beloved father's untimely death. As the firstborn, Anthony viewed his father as a larger-than-life figure, a constant north star, the man against all others -- including himself -- could be measured and found wanting. To lose such a man to a freak accident like a bee sting was a tragedy even an eighteen-year-old Anthony could barely fathom, and holding his father in such esteem, Anthony instinctively determined that there was no way he could surpass his father even in years -- and so he must be destined to die at thirty-eight. With that deadline looming over his life, Anthony threw himself into the position of surrogate father and head-of-household with a fervor born of his desire to honor his father and his own deep and abiding love for his close-knit family. But with a very different kind of fervor he set himself to embrace all the vice and passions offered to a leading member of the ton, and in the process earned a reputation as one of London's most unrepentant rakes. However, when Anthony realizes he is a mere ten years away from that fateful age of thirty-eight, he decides that this season he must embrace his familial duty and at long last take a bride and have an heir. His one stipulation is that the woman in question must be one he could never love, for love would make his inevitable mortality unbearable. And so he sets his sights on this season's jewel, Edwina Sheffield -- she's beautiful and kind but leaves him cold, the perfect bride -- but he never counted on Edwina's older sister to be equal parts interfering and alluring...

At twenty-one, Kate Sheffield is finally enjoying her first season in London -- or she should be, if she was viewed as more than the radiant Edwina's older sister. Kate is resigned to the fact that she'll likely end a spinster, and that her younger half-sister will be the one to save mother and herself from an unenviable future of genteel poverty. She doesn't resent her sister's beauty or acclaim, but rather she resolves to use her position as the older sibling to make sure that Edwina marries well -- more than a wealthy man, Kate wants her sister to marry a good one. And thanks to the infamous Lady Whistledown's gossip column, she's positive that Anthony Bridgerton is the last man in the world who could make her sister happy.  When Kate meets Anthony, sparks fly -- she's determined to protect her sister from a rake of the worst sort (never mind his smoldering glances and smiles that turn her weak in the knees!) while he's maddened by her intractable opinion on his character and therefore his marriage to Edwina (never mind that it's her sister's lips he wants to kiss and whose image, uninvited, fills his dreams). Viscount Bridgerton will marry a Sheffield -- the only question is, will it be the sister he's chosen or the one who drives him mad, whose self-proclaimed mission in life is to foil his plans?

After falling in love with the quirky, exuberant Bridgerton clan in The Duke and I -- my introduction to Julia Quinn's writing -- I knew I wouldn't be able to long resist the pull to revisit their world. Everything I loved in Daphne and Simon's story reappears here in Anthony's tale -- the warmth, wit, and humor that I'm fast learning is a hallmark of Quinn's effervescent writing. From the first moments of Anthony and Kate's introduction, I was powerfully reminded of the spark that characterizes one of my all-time favorite romances -- that of Beatrice and Benedick in Shakespeare's Much Ado About Nothing, with perhaps just a dash of the fire that sparks between another Kate and her unwanted suitor Petruchio in The Taming of the Shrew. Here Quinn takes the familiar trope of warring, would-be lovers and breathes fresh life into it through her whip-smart characterizations and the situations -- from the ridiculous to the sublimely romantic -- that gradually weave a seductive web around Anthony and Kate, forcing them each to realize the one truth they'd rather die than admit -- that they just might be each other's perfect match.

I had some trouble buying Kate's self-proclaimed role as gatekeeper of her sister's future, particularly since she has such a warm relationship with her stepmother Mary, and Edwina never appears to be lacking for commonsense. That aside, Quinn sketches Kate's insecurities regarding her own self-worth and desirability with a sensitive brush. In a less accomplished author's hands, Kate's qualms, her self-image issues and fears could have become a farce, but as Kate begins to fall in love with Anthony, Quinn's deft characterization illuminates the fears, doubts, and self-image issues that have cause Kate to buy into the lie that she is somehow less than her beloved sister and makes her transformation all the sweeter. It's a delicate balance to achieve, but Quinn is a master at tapping into one's most closely-held doubts and fears, and seeing them excised on the page with warmth and compassion.

Overcoming fear is an over-arching theme throughout the novel -- not only Kate's fears of rejection, but Anthony's fear of his own mortality, birthed out of his beloved father's death. I loved Quinn's honest treatment of fear and grief here, for no matter the cause, she never belittles its oft-times crippling impact. As someone who has often fought her own battle with fear, I loved Quinn's honest, compassionate portrayal of such. As I discovered in The Duke and I, her often frothy, humorous writing belies the weightier subject matter she introduces as obstacles in her romances -- there she touched on the subject of the emotional abuse Simon suffered as a child, while here she delves into the emotional toll losing a parent has exacted on both Anthony and Kate's lives, and the danger in allowing one's fears to dictate how one lives life, and the liberty found in opening oneself to love, affirmation, and healing. It would've been easy, given the subject of Anthony's fears, to have his character seem less than "heroic," given the emotional component and the expectations of heroes to live up to their alpha potential in novels of this ilk. But in the hands of a master craftsman like Quinn, Anthony's character shines with depth, all the more alluring for the honesty with which his reluctant, unexpected love story inspires him to transform his life.

Quinn's trademark humor and breezy, fast-paced writing style make her second installment of the Bridgerton series shine. While Anthony and Kate's budding relationship is a tick more physical (*ahem*) initially than the intellectual camaraderie that characterized Daphne and Simon's early encounters, Quinn is fast proving herself to be a master at crafting relationships ultimately founded on a bedrock of emotional and intellectual compatibility. And for all Kate and Anthony relish trading verbal jabs when they first meet, it's their journey from adversaries to lovers, with a friendship founded on respect and honesty, and of, as Kate resolves, making the conscious decision to fall in love anew every single day that made my heart sing. The absolutely delightful dynamic between the close-knit Bridgertons, from the infamous Pall Mall game to the delicious, needling camaraderie between Anthony and his younger brothers (oh, I cannot WAIT for Colin's story!), the humorous antics of Kate's beloved corgi Newton -- all these elements are just the proverbial icing on the cake. The Viscount Who Loved Me is a thoroughly engaging, swoon-worthy love story -- a romance crafted of equal parts passion and intellect, Anthony and Kate's reluctant romance is a story to cherish.

1814 promises to be another eventful season, but not, This Author believes, for Anthony Bridgerton, London's most elusive bachelor, who has shown no indication that he plans to marry. And in all truth, why should he? When it comes to playing the consummate rake, nobody does it better...

Contrary to popular belief, Kate is quite sure that reformed rakes to not make the best husbands--and Anthony Bridgerton is the most wicked rogue of them all. Kate's determined to protect her sister--but she fears her own heart is vulnerable. And when Anthony's lips touch hers, she's suddenly afraid she might not be able to resist the reprehensible rake herself... 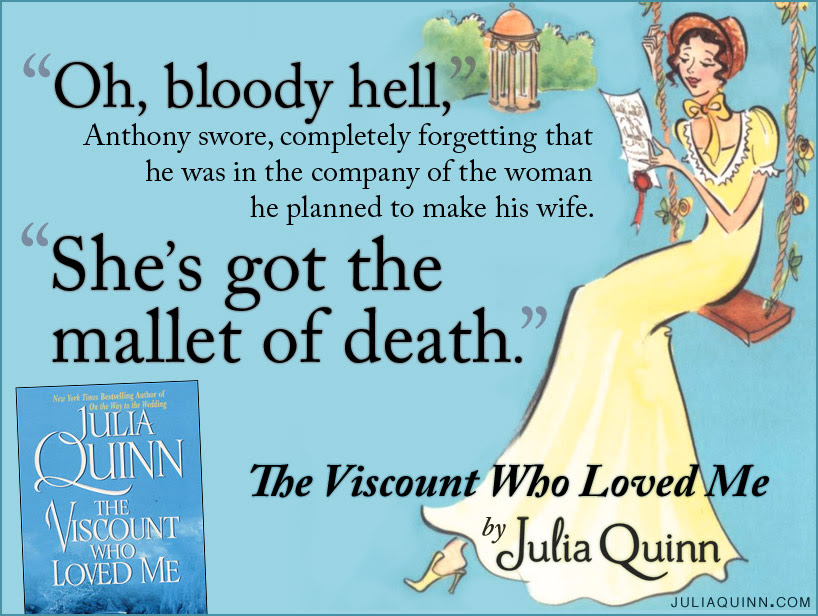 The only thing I remember from this novel is the sword fight near the end.

One of my top-rated books from last year. And the next two in the series are even better!

This inspired me to get back to the Bridgerton series. I decided to skip When He Was Wicked (#6), since I tried it twice and couldn't get into it either time. So I started It's in His Kiss last night and it immediately grabbed me. So I have high hopes for actually finishing this series and moving on to the Smythe-Smith series soon!

I'm so glad #7 grabbed your attention immediately...after the week I've had I'm tempted to put everything aside and dive right into the third Bridgerton book myself -- but I AM enjoying my current reads, so I may try to stick to plan. ;)