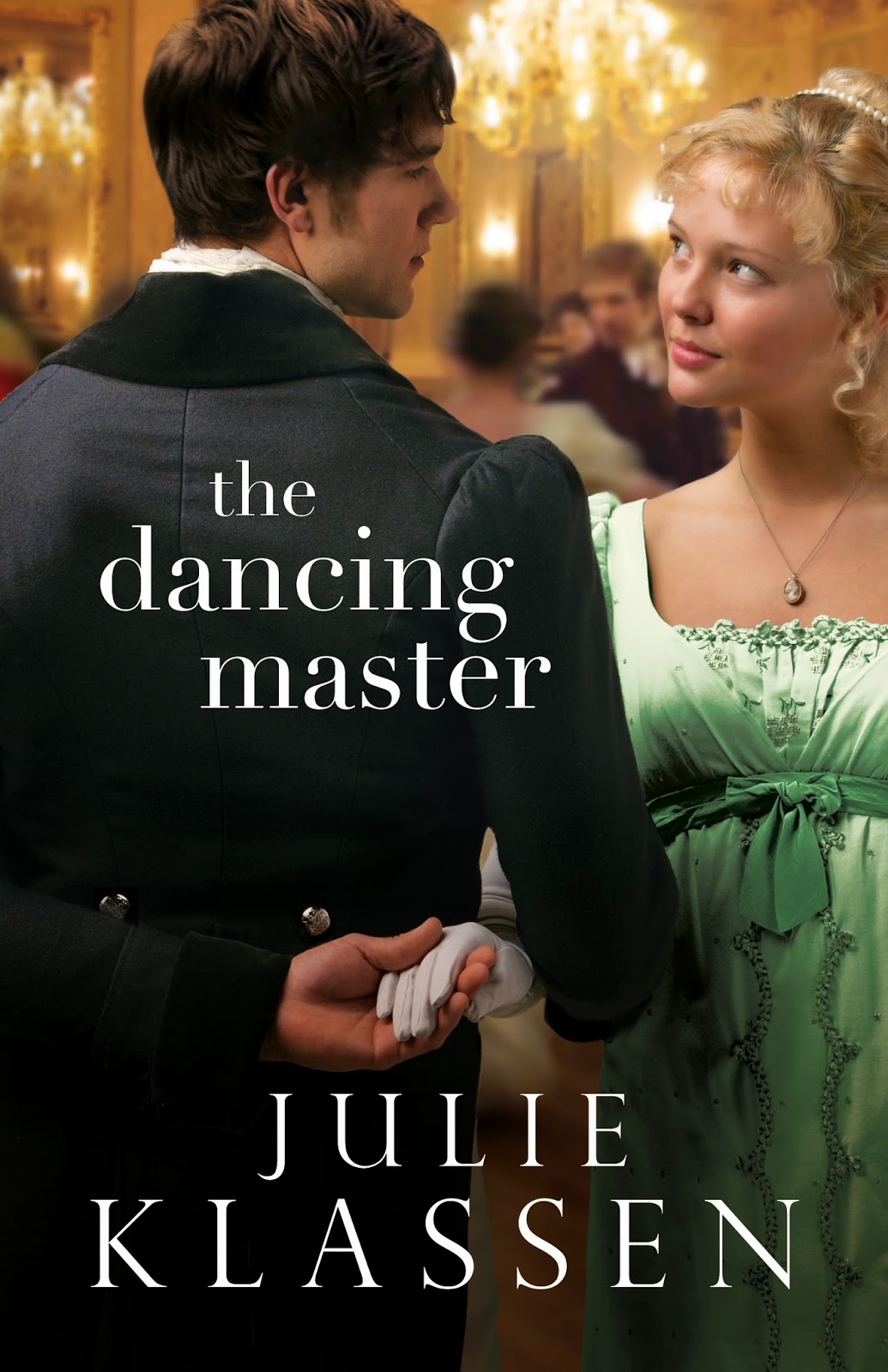 Julia Midwinter, the only child of Lady Amelia, the formidable leading citizen of the small village of Beaworthy, aches to escape the confines of the only home she's ever known and the stifling restrictions her mother has constructed around her life. Lady Amelia is a model of duty and responsibility, long-ago family tragedy causing her to forswear frivolous, potentially dangerous pursuits such as dancing -- for in the euphoric atmosphere of a public ball, one small slip can lead to morally bankrupt chaos. Frustrated and alone, Julia embraces every chance she can to raise her mother's ire, indulging in reckless behavior and flirtations, desperately seeking a sense of belonging, of life within the staid confines of Beaworthy. When the handsome Alec Valcourt arrives from London, she's immediately drawn to his good looks and charm -- particularly when she discovers that his chosen profession is that of dancing master, the one occupation her mother abhors most of all. Positive Alec can breathe new life into Beaworthy, Julia seeks every opportunity to further their acquaintance -- but the erstwhile dancing master proves to be a deeper riddle, and a more reticent recipient of her flirtations than she'd ever dreamed possible. Could the dancing master and his forbidden trade be the key she's long sought to breathe life into her restless spirit?

Alec Valcourt and his mother and sister retreated to his uncle's home in Beaworthy, fleeing rumors and disgrace in London, hoping for a fresh start. A third-generation dancing and fencing master, Alec hoped to bring his passion for the more graceful social arts to his new home, and perhaps establish his reputation anew, and restore honor to the Valcourt name. But Lady Amelia's ban on dancing proves to be a formidable obstacle, one a young man of little money and scant reputation can scarce afford to challenge. Against all reason he finds himself drawn to the fiery Julia, the one woman in the village forbidden to him by class and virtue of his profession. Spurred by Julia's passion for change, the unlikely pair finds themselves inexorably drawn into a delicate dance of their own making, one that threatens to bring to light long-held, painful secrets, and hold the promise of restoring life and dance to a community shadowed by guilt and condemnation. But exposing secrets doesn't come without a price -- a price Julia, Alec, and Amelia must each decide if they're willing to pay, for the chance to dance in the light of freedom requires both forgiveness and grace.

Julie Klassen's latest Regency romance is an exquisite exploration of the power of art and faith to transform a life. For one such as I who professes to be something of an Austen aficionado and an avid lover of both costume dramas and fiction that brings this time period to life, I'm rather nonplussed to admit that prior to delving into this novel I'd never heard of or realized the critical importance of a dancing master in developing the social skills that make up such a part of this time period. The role of a dancing master is a fascinating one to consider -- a purveyor, if you will, of valued social skills, but still outside the realm of complete acceptability into the highest echelons of society. His talents may be valued, and utilized, but there is a line that cannot be crossed, as Alec and his family tragically discover.

Considering the time period and subject matter, I was surprised The Dancing Master unexpectedly reminded me of a twentieth-century literary classic -- Pollyanna by Eleanor H. Porter. While Julia has far too many of her own immature traits and insecurities to overcome in order to be classified as a Pollyanna figure, in my view the over-arching theme of both stories is strikingly similar -- finding the good in every situation. Like Pollyanna's "Glad Game," Beaworthy and her residents have been stifled by Lady Amelia's desire to unofficially legislate a specific moral code in the wake of her personal family tragedies. It's only when truths are revealed and forgiveness offered that Amelia is able to at long last lay to rest the demons that have haunted her, freeing both her and her village to once again embrace the community and artistic expression offered by the long-dormant art of dance.

Julia is a fascinating heroine. Initially a bit prickly, her headstrong nature reminded me of Austen's Emma -- only even lacking that classic heroine's belief in her rightness. This is a girl intensely frustrated by her life and desperately seeking a sense of belonging, her bravado eventually revealed to mask intense pain. Although her mother offers love and affection, the secrets she holds dear -- and that Julia senses -- prevent the two from reaching an accord. It's only when the secrets surrounding Julia's birth are brought to light that she realizes that the acceptance and security she longs for cannot be found in another individual; rather, it's only in the grace of faith and forgiveness, freely offered and accepted, that she finds a lasting balm for her soul. I adore the slow-burning romance Klassen develops between Alec and Julia -- he is SUCH a gentleman, and while young and struggling to establish his career, he has an honorable core that makes him the perfect match for the fiery Miss Midwinter.

The Dancing Master is a joy from start to finish, an exquisite novel saturated with the understated beauty and power of the very art form it extols. Like Austen and Heyer, Klassen excels at building a community in her novels, and never more apparent than here as this is far more than Alec and Julia's love story -- instead, it is the tale of a community renewed and transformed, a love story, if you will, to the transforming power of faith and fellowship. I initially thought that perhaps this would be Klassen's most Austen-esque novel to date, missing the thread of intrigue that has peppered her earlier work, so I was pleasantly surprised to be proven wrong. Through carefully-meted detail and expertly-sketched characters, Klassen unfolds a tale of love, loss, and betrayal worthy of a Bronte sister. Once again the cost of secrets are weighed against the power of truth and forgiveness, all while skillfully illuminating a fascinating quarter of nineteenth-century English society. Klassen's novels are experiences to savor, and The Dancing Master is no exception -- a romance for the heart and soul.

Finding himself the man of the family, London dancing master Alec Valcourt moves his mother and sister to remote Devonshire, hoping to start over. But he is stunned to learn the village matriarch has prohibited all dancing, for reasons buried deep in her past.

Alec finds an unlikely ally in the matriarch's daughter. Though he's initially wary of Julia Midwinter's reckless flirtation, he comes to realize her bold exterior disguises a vulnerable soul -- and hidden sorrows of her own.

Julia is quickly attracted to the handsome dancing master -- a man her mother would never approve of -- but she cannot imagine why Mr. Valcourt would leave London, or why he evades questions about his past. With Alec's help, can Julia uncover old secrets and restore life to her somber village...and to her mother's tattered heart?

Filled with mystery and romance, The Dancing Master brings to life the intriguing profession of those who taught essential social graces for ladies and gentlemen hoping to make a "good match" in Regency England.
Posted by Unknown at 12:29 PM

Great review! It's funny...dancing is such a prominent part of Regency stories, but I've never really considered how people actually learned to dance. Ha! Now I'm even more anxious to read this one. :) I bought it last month but haven't gotten around to reading it yet. Julie Klassen's books are always good, and The Tutor's Daughter was one of my absolute favorite reads last year. :)

@Kristin - Right? Me either, lol! The profession is so interesting and I'm so glad Klassen chose to explore it here. I just LOVED this one -- it is SO well done. :) Hope you enjoy it too!!

Agreed! I so enjoyed this one!