So this is happening SUNDAY! 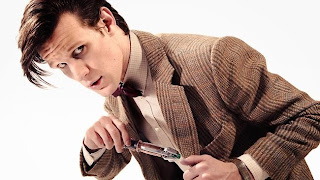 DOCTOR WHO LIVE: THE NEXT DOCTOR SPECIAL TO AIR LIVE THIS SUNDAY ON BBC AMERICA
What:
The next Doctor of BBC AMERICA’s hit series Doctor Who will be announced during a live special this Sunday afternoon.
When:
Sunday, August 4, 2 pm ET LIVE on BBC AMERICA and BBC One in the U.K.
Who:
Widely regarded as one of the most hotly contested roles in British television, the special’s host Zoe Ball will unveil the Twelfth Doctor in their first-ever interview in front of a live studio audience. The half-hour show will include live special guests, Doctors old and new, as well as companions and celebrity fans. Current Doctor Matt Smith and lead writer and executive producer Steven Moffat will both give interviews in the special.
Steven Moffat says: “The decision is made and the time has come to reveal who’s taking over the TARDIS. For the last of the Time Lords, the clock is striking twelve.”
Matt Smith will make his penultimate appearance in the 50th Anniversary special on Saturday, November 23, and his Eleventh Doctor will regenerate in the Christmas Special. Doctor Who is produced by BBC Cymru Wales.
Posted by Unknown at 4:30 PM

Email ThisBlogThis!Share to TwitterShare to FacebookShare to Pinterest
Labels: Doctor Who, Matt Smith

Oh my goodness...I've been wondering when they were going to announce the new Doctor! I'm so nervous and excited. :) Hoping it'll be available to watch online!

(This is the first regeneration I'm experiencing firsthand. :)

@Kristin - I'm sure clips at the very LEAST will be available online. And I'm so excited for you!! Brace yourself... ;)

I love Matt Smith so much, I'm really sad he's leaving, but I'm extremely eager to find out who the new Doctor will be!

By the way, I found your blog through the contributors to Femnista list, and I liked your article on Lewis and Hathaway! I didn't really get into the one show I first saw, but my sister wants to watch them again, and your article made me interested to watch them with her.

I'm still confused over how he's going to regenerate if he already died without regenerating but okay... ;)

I was scheduled to be at a church function Sunday afternoon. I've told them I can't make it as something important has unexpectedly come up. (Believe me, THIS is important!)

@Lizzie - Welcome to the blog!! :) I'm so glad you liked my little piece on Lewis & Hathaway, I had a lot of fun revisiting some older episodes in order to write it. I hope you enjoy the show even more this time around...I think it is a worthwhile investment. :)