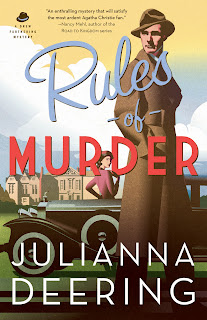 Drew Farthering, society playboy and heir to the Farlinford Processing fortune, returns to the family estate in Hampshire seeking a respite from the meaningless whirl of social obligations -- only to find his home playing host to one of his stepmother Constance's parties. The guests included one very unwelcome David Lincoln, who inherited his position on the Farlinford Processing board at his father's death, his increased intimacy with the Fartherings' business soon giving way to rumors of an affair with Constance. But Drew is soon distracted from David's odious presence by the arrival of his stepfather Mason's American niece, the beautiful Madeline Parker. Drawn to Madeline's warmth and wit, Drew begins to hope that he's finally met a woman of depth with whom he could plan a future, one to give meaning and purpose to his directionless -- albeit privileged -- existence.

But when Drew and Madeline discover the mangled body of Lincoln during a party, the two are drawn into a web of deceit and danger that casts a shadowy pall over their blossoming romance. A longtime mystery aficionado, Drew determines to launch his own investigation with the help of Madeline and his best friend and valet Nick. But real-life detective work is nothing like the fiction he loves, his amateur efforts breaking every rule of crime-solving in the book while casting a shadow of suspicion over family and friends and calling into question everything he thought he knew about himself. The more Drew persists, the greater the danger, and when a second tragedy strikes all that stands between him and those he loves may just be his unconventional thinking...if only he can uncover the truth in time to unmask a killer before he strikes again!

At the risk of waxing hyperbolic, please indulge me when I say that I have been waiting for this book for the better part of my adult life. As a teenager I cut my mystery-loving teeth on tales of murder and mayhem by the Queen of Crime, Agatha Christie, expanding to fall in love with the works of contemporaries like Rex Stout and Dorothy L. Sayers. Whether in print or on-screen, memorably memorialized by actors the like of David Suchet as the inimitable Poirot or Geraldine McEwan as Miss Marple (my personal favorite portrayal of the character), I've devoured classic mysteries and the film versions remain some of my consistently favorite television. This type of storytelling, told with intrigue, intelligence, and panache, never gets old -- but I began to lose hope of ever discovering a an author capable of telling a tale in the vein of the masters in the inspirational fiction market.

When it comes to period mysteries, I want pitch-perfect historical detail, smart, fast-paced plots, and sparkling dialogue -- and Rules of Murder delivers on all fronts. Deering has clearly done her research, not only translating the feel of a classic Christie mystery into Drew's world, but her narrative shines with period detail, mannerisms, sparkling dialogue and a wry, self-deprecating sense of humor. The latter quality is reminiscent of the classic Hollywood equivalent of a Christie mystery -- the Thin Man films that showcased the memorable sparring between William Powell and Myrna Loy as high-class amateur sleuths Nick and Nora Charles. Drew is every inch Nick Charles (sans the ever-present drink, lol), from his razor-sharp intelligence to his perfectly tailored suit, with the added bonus of a British accent. *wink*

Deering not only takes a stab at deconstructing the tropes of classic mysteries but manages to succeed at incorporating a very subtle faith thread through Drew's character arc -- an aspect that could have easily tanked the narrative flow of the storyline, stripping its characters of their charm and the mystery of its effectiveness. Drew, Nick, and Madeline either consciously address or accidentally break most of Ronald Knox's "Ten Commandments" for detective fiction. I loved having "contemporaries" of my favorite authors referencing and deconstructing the works that would make them famous. And the manner in which Deering touches on issues of faith, belief, and identity is masterfully done, staying true to Drew's personal and social position, using Drew's aristocratic status to explore the idea of how one who *should* have it all approaches the concept of faith and belief.

With Rules of Murder Deering has established herself as a voice to watch in period mystery fiction. The characters are established, the beginnings of a love story suggested, and the tantalizing promise of secrets hidden within Drew's past, sure to be explored in further installments of the series. Drew is an utterly charming hero, and the cast of supporting players peopling his world are well-developed. I loved Madeline's humor and depth -- I do hope that in future volumes she develops a bit more of the His Girl Friday-style spark and energy heroines in classic mysteries are known for -- a mix of Nora Charles and Christie's Tuppence. Deering's mystery debut is a charmer from start to finish, replete with delicious period detail, effervescent, bubbly dialogue and well-drawn characters. This book is, at the risk of sounding dramatic, a bit of a dream come true for this mystery-lover. Bravo, Ms. Deering -- I cannot wait to discover what you have in store for Drew & Co. next!

Introducing Drew Farthering: From the tip of his black homburg to the crease in his cheviot trousers, he's the epitome of a stylish 1930s English gentleman. His only problem? The body he just discovered.

Drew Farthering loves a good mystery, although he generally expects to find it in the pages of a novel, not on the grounds of his country estate.

With the help of beautiful and whip-smart Madeline Parker, a guest from America, Drew proposes to use the lessons he's learned reading his mysteries to solve the crime. Before long, he realizes this is no lark, and no one at Farthering Place is who he or she appears to be -- not the butler nor blackmailer, the chauffeur nor embezzler. Trying hard to remain one step ahead of the killer -- and trying harder to impress Madeline -- Drew must decide how far to take this dangerous game.

I almost forgot to share who I "cast" as Drew while reading the book! This novel is so saturated with the feel of classic mysteries -- and classic Hollywood -- that I haven't yet found a contemporary actor that I think would be perfect to play Drew. So I landed on this -- a young Tyrone Power: 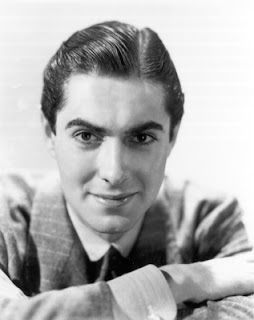 People, this is SO Drew to me! Oh Tyrone, he would've perfect for this role. :)
Posted by Unknown at 7:13 PM

Thank you so much for your wonderful review. I'm quite honored.

Sounds like a tip-top read. Cannot wait to get further into it - what I read, I loved! :)

I think I requested this from Netgalley. I hope!

I'm glad you liked it! I also really enjoy mysteries...Agatha Christie, The Thin Man, Sherlock Holmes, etc. I came *so* close to requesting this book to review, but I had a stack of library books at the moment and decided not to. But now I've been reading so many good things about it I wish I had. :) I just saw it at the bookstore the other day, though, so I'll have to pick it up!

Sounds like a great read, and I ADORE the cover! (I'm a cover girl!)

Wow, it sounds like an amazing mystery, I'm going to have to find it!

@DeAnna - Thank you so much for stopping by! I SO enjoyed this book and can't wait to see where you take the characters next! :)

@Kristin - I think you would really enjoy this one!! Hope you can pick up a copy soon. :)

@Joanne - Isn't this cover FABULOUS? The publisher did a fantastic job!

So glad you reviewed this one. I saw it and meant to look it up. I need to check this one out. I love the cover.

I have been so excited about this book, but a little fearful, too, that it wouldn't live up to my expectations! After this review, I have no fear! It will jump to the top of my list! :)