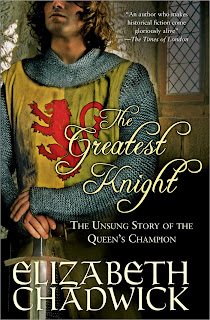 The second son of John Marshal, Lord Marshal of England during the reign of King Stephen in the 12th century, William is a child whose renown and influence was destined to surpass his father -- yet his name remains lost to the popular, generally taught history of today. I know appallingly little of the Plantagenet kings, other than Richard I and Prince John's famous rivalry, which gave birth to one of my favorite legends -- that of Robin Hood. William's service to the Plantagenets spans four kings, and Chadwick begins her recreation of his life nearly forty years before Richard the Lionheart took the throne. As a child of five William's life was forfeit by his father, in rebellion against King Stephen, and only spared by Stephen's whim. His boyhood was spent apprenticed to his mother's cousin, training as a knight in Normandy.

Though his career as a knight had an inauspicious start, riddled by insinuations of favoritism as a relative of his liege, William found his true mettle on the tourney field, winning acclaim and wealth. When the opportunity arose to join his uncle the Earl of Salisbury, in service to Eleanor of Acquitaine's household, his life becomes irrevocably entwined with the Plantagenet princes. The young princes, with stars in their eyes and dreams of power and valor -- dreams fed by William's faithful service, service that will cost the young knight more than he'd ever dreamed, but whose determination to live a life of loyalty and honor will see this second son's star leave an indelible impression on five tumultuous decades of English rule.

I've seen glowing reviews of Chadwick's novels throughout the blogosphere, ever since Sourcebooks began re-releasing her novels in the States a few years ago. As I've recently been on something of a Tudor-era fictional kick, I thought it was past time to try one of her works. Roughly the first fifteen to twenty percent or so of the novel -- touching on William's childhood and then covering his youth as a squire in Normandy in more depth -- were a bit of a rough go for me. The narrative seemed sluggishly paced and William's youthful growing pains were frankly less than compelling reading. I confess that my absorption into the novel was somewhat further hampered by an error I made in perusing Chadwick's website, were she goes into some depth into her belief in the "Akashic Record" and her use of a "reader" in her research to tap into the feelings and sensations of those long dead somewhat distracting, as every time William "felt" something I was overcome with the urge to burst out laughing.

But, my perception of this methodology as somewhat sketchy aside, I am SO glad I persevered, as The Greatest Knight proved to be a thoroughly absorbing read, and William Marshal a hero I'm most happy to have met within the pages of this novel. Chadwick's narrative gains traction when William finally joins Salisbury's household, his entrée into the rarefied and dangerous world of English royalty. His fine figure, courtly manner, and prowess as a knight earns him the favor of Queen Eleanor, leading to a lifelong friendship destined to weather the storms both endure in and out of royal favor, under-girt by William's unflagging loyalty and Eleanor's savvy judgement and fierce dedication to her sons' futures. I LOVED Chadwick's characterization of the legendary lady of Acquitaine. Her charisma, formidable will, and determination to remain unbowed in the face of imprisonment and warring sons is beautifully sketched on the page -- I couldn't be more thrilled to learn that in Chadwick's latest trilogy, Eleanor takes center stage.

William's time as head of the Young King Henry's household, Henry II's heir, proves to be a crucible in which he learn the cost of loyalty and court politics, as Henry II and his heir apparent spend over a decade quarreling over the Young King's desire to exercise his right to rule -- a right his father was loathe to cede to in any measure. The young Henry's death sparks a crisis of conscience in William's life, spurring a pilgrimage to the Holy Land and a personal moral reset. Forsaking the fame of tourney life and artfully playing the game of court politics, William's unflagging loyalty and strength of purpose sees him rewarded with new honors, culminating in marriage to Isabelle de Clare, heiress to the earldom of Pembroke. As a man who had thought never to marry, I LOVED their story. Though over two decades her senior, their marriage appears to have grown into a love match, resulting in ten children and a true marital partnership, the likes of which was rare in the 12th century.

Though hampered by a slow start, The Greatest Knight proved to be a rewarding portrait of a refreshingly honest hero. Far from perfect, William Marshal was nevertheless notable for his unflagging loyalty and devotion in the face of persecution and failure. This is likely the most principled man I've ever met within the pages of a book, and though far from perfect through Chadwick's characterization he is nevertheless a refreshingly honorable hero. Chadwick does an excellent job packing the narrative with the flavor of the time period, from descriptions of food and clothing to the political intrigue that would challenge William's honor and resolve time and again throughout his life. I do feel that the book is somewhat hurt by its scope -- even clocking in at nearly 600 pages, to cover over four decades in a life so packed, so well lived, seems rushed. That said, I ultimately found this first volume illuminating William's extraordinary story fascinating, page-turning reading -- the final third in particular is SO GOOD. William Marshal seems to have defined the phrase a life well lived, and I am so looking forward to learning more of this man and his family in Chadwick's sequel, The Scarlet Lion!

A penniless young knight with few prospects, William Marshal is plucked from obscurity when he saves the life of Henry II's formidable queen, Eleanor of Aquitaine. In gratitude, she appoints him tutor to the heir to the throne, the volatile and fickle Prince Henry. But being a royal favorite brings its share of danger and jealousy as well as fame and reward.

A writer of uncommon historical integrity and accuracy, Elizabeth Chadwick resurrects the true story of one of England's greatest forgotten heroes in a captivating blend of fact and fiction. The Greatest Knight restores William Marshal to his rightful place at the pinnacle of the Middle Ages, reflecting through him the triumphs, scandals, and power struggles that haven't changed in eight hundred years.
Posted by Unknown at 7:18 PM

I, too, was underwhelmed by the start of the novel, but it is a wonderful read overall. Please do read The Scarlet Lion, as the two books together tell the complete story and it's memorable. Enjoy!

I bought this at a library book sale several years ago. I'm not very good with slow starts but I'll try my best...