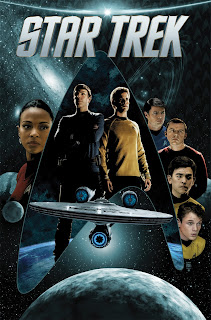 I wish I'd discovered the existence of IDW's comic series continuing the adventures of the Enterprise crew introduced in the 2009 re-boot -- it would've made the long wait for this year's sequel Into Darkness slightly more palatable. *wink* This first volume contains two stories, both based on episodes from the Classic Trek series -- "Where No Man Has Gone Before" and "The Galileo Seven." While my knowledge of all things Classic Trek is minuscule when compared to my love for the J.J. Abrams-helmed reboot, I love the idea of revisiting old tales and giving them a fresh spin with the new faces of the franchise. Therefore this post will be limited to my impressions of the stories as is, as I'm not yet in a position to compare this volume to the stories in their original, scripted television form.

The first story, "Where No Man Has Gone Before," is an excellent showcase for a still-green Captain Kirk to adjust to his new position and responsibilities on the Enterprise. There is some tension between his old, fun-loving Academy friends and his new crew mates, and Kirk's attempts to reconcile his well-known party-boy persona with his new responsibilities feels very much in keeping with Chris Pine's portrayal of the younger, brash Starfleet officer. The story ends on a fantastic note for fans of the Kirk-Spock friendship, as the ever-logical Vulcan responds to Kirk's difficult decision with an unexpected overture of friendship -- I loved that! The second story, "The Galileo Seven," features a more assured Kirk and instead focuses on this more human incarnation of Spock and his struggle to relate to and command respect from his wholly human subordinates. Anytime Spock is tested, pushed outside his comfort zone I'm going to love it, and this story delivers, including the Vulcan reaching a welcome accord with one wryly cynical doctor. :) It's nicely-done tale showcasing Spock's leadership skills and Kirk's loyalty to his crew.

Featuring gorgeous, detailed artwork, this volume not only fulfills my need to see more of the New Trek crew between their film appearances, but leaves me more eager than ever to continue my exploration of the Classic Trek television show.

The adventures of the Starship Enterprise continue in this new series that picks up where the blockbuster 2009 film left off! Featuring the new cast of the film, these missions re-imagine the stories from the original series in the alternate timeline created by the film, along with new threats and characters never seen before! With creative collaboration from Star Trek writer/producer Roberto Orci, this new series begins the countdown to the much-anticipated movie sequel.
Posted by Unknown at 3:42 PM

Ruth, thank you so much for your kind, compassionate words as I grieve the loss of my Nikki dog. Truly, your words were some of the most comforting I received...telling me that if she could talk she would have said she was okay with dying in the arms of a loved one in the familiar surroundings of home, even if she was in distress. You have no idea how those words touched my heart! Thank you!

By the way, since I was out of town and off-line for much of July, I missed any updates about your dad. Hope he's doing well.