Review: The Age of Desire by Jennie Fields 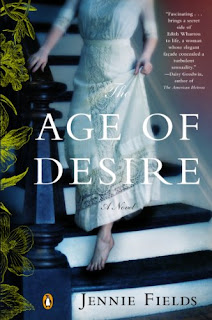 Despite the acclaim and financial success she's received from her runaway bestseller The House of Mirth, author Edith Wharton is unhappy and restless. Trapped in a passionless marriage, barely able to tolerate the emotional needs or attentions of her husband Teddy, Edith's one outlet through her adult life has been to channel her fierce intellect and unfulfilled emotions through her writing. Her investment in her craft finally pays off with Mirth's success -- but her friendship with noted literary elites like Henry James and her ability to enjoy the accouterments of wealth and privilege abroad do little to quell her insistent longing for more, for a connection capable of captivating her entire being. When she meets journalist Morton Fullerton, she's entranced by his manner and flattered by his singular attention. What starts as a stimulating intellectual connection blossoms into an affair that threatens to destroy all Edith holds dear. Her growing obsession with Morton and the undeniable passions he awakens within her once emotionally void existence quickly becomes a drug Edith is loathe to live without. But the very society that Edith deconstructs in her novels, the very world whose consumption of her prose enables her lifestyle, is left shaken to the core by her affair, and faced with the risk of losing everything Edith must decide what kind of life she's willing to fight to claim as her own.

Though I have little knowledge of Edith Wharton's personal life and only a passing acquaintance with her fiction, I love the Gilded Age and turn-of-the-century history and was intrigued to learn more of Wharton's life. However, I must admit to being less than enamored with Edith's story. From the novel's opening pages and first-person, present tense narration I knew I was going to have issues. First-person, present tense is one of the least desirable narrative forms in my view, resulting in clunky, awkward sentences and plodding prose, slowing the forward momentum of the plot to a crawl.

And then there's Edith. While I don't expect to like or agree with every protagonist I meet within the pages of a novel, it helps if on some marginal level at best that I can sympathize with their struggle or relate to their point-of-view -- and on that score, Edith leaves me cold. There is rich material to mine during this time frame -- not only Edith's personal life and position as a pioneering female author, but the social restrictions of the time period, particularly relevant as to the proscribed roles of women, is rife with potential when exploring the life of one who struggled to fit within the generally accepted mold. Edith's affair with Morton, only confirmed decades after her death with the release of her letters, is a scenario ripe with juicy dramatic possibilities. But if the Edith found within the pages of this novel is a reflection of the real-life woman, I have next to no sympathy for the situation in which she finds herself here -- a situation that results a rapidly disintegrating marriage, that, given her husband's struggles with mental illness and depression, is only exacerbated by her selfish, singled-minded pursuit of a playboy reporter who turns this would-be intelligent author into a simpering fool. There is nothing remotely compelling about the woman Edith becomes when in thrall to Morton's dubious "charms."

The one bright spot in the narrative is Edith's friend and secretary, her one-time governess Anna. Anna is a sensitively-realized, semi-tragic figure -- a thoughtful examination of a woman's fate when she finds herself older, single, and responsible for her own support and well-being, particularly in a world that assumes a woman's role and support are conditional on her eventual (assumed) marriage. It's fascinating to consider that this unassuming woman may likely have played an important role in shaping Wharton's fiction by serving as her first reader. But more than that, their friendship, in all of its messed up, unequal glory, is a strikingly authentic -- albeit tragic -- chapter in Edith's life. While Anna was certainly not perfect, she did at least strive to be a constant friend -- and it is both heart-breaking, maddening, and humbling to conceive of her loyalty to her erstwhile pupil who would have done well to heed her faithful friend's counsel. I would've loved a novel entirely focused on Anna and her role vis-a-vis Edith's writing, as well as her family life and experiences -- she is a woman of whom I would love to know more.

There is a lot of potential here -- the tension between passion versus duty, personal desire versus social acceptability -- but the resulting tale left me cold. Edith's "struggles" seem primarily self-induced, and while her marriage to Teddy, given his mental instability, would've certainly been difficult even were they a love match, the manner in which is she abandons her marriage wholesale -- while determined to stay in it -- was frankly grating. By contrast, those surrounding Edith -- from Anna to Henry James -- are fascinating. Fields has a knack for portraying the mores and manners of the time period, and should she elect to stay within the turn-of-the-century for further fictional endeavors, featuring more palatable protagonists, there is much potential to be had. While The Age of Desire didn't resonate with me as I'd hoped, I suspect more avid fans of Edith Wharton will find much of interest within its pages. A challenging effort personally, but I am happy to have expanded my knowledge of this ground-breaking woman and her times.

A sparkling glimpse into the life of Edith Wharton and the scandalous love affair that threatened her closest friendship.

It has been said that behind every great man is a great woman. Behind Edith Wharton, there was Anna Bahlmann, her governess turned literary secretary and confidante. At forty-five -- despite her growing fame -- Edith remains unfulfilled in a lonely, sexless marriage. Against all the rules of Gilded Age society, Edith falls passionately in love with Morton Fullerton, a dashing young journalist. Their scandalous affair awakens her senses, but threatens everything in her life-- especially her abiding ties to Anna. As Edith's marriage crumbles, the women must face the fragility at the heart of all friendships.

The Age of Desire transports readers to the golden days of Wharton's turn-of-the-century world and effortlessly re-creates the life of an unforgettable woman.

*Thanks to Historical Fiction Virtual Book Tours for the review opportunity.
Posted by Unknown at 3:46 PM

I'm glad I didn't request this, then, even though I was tempted. The only thing I know about Wharton's personal life is that she fell in love once, but when she realized he was a playa playa she was like, "Laters."

Ruth: I totally forgot to mention the first-person narrative (which drove me bonkers). I rarely--if ever--enjoy books written in first person as much as I might.

You've done a much more indepth review than I felt up to after enduring Wharton's shallow character. There was definitely a lot of unrealized potential in this one.

I was so disappointed and disgusted with the portrait of Wharton here that I haven't been able to bring myself to read any more of her books, which I know is super unfair but it just left such a bad taste in my mouth.

@Bev - I can totally relate. I've grown to like some first person narration, but this first person present was just so awkward, it really kept me from getting immersed in the narrative. Very frustrating!