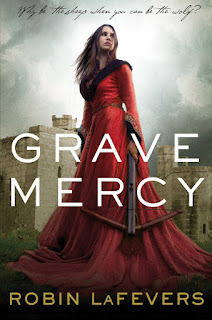 Ismae is a daughter of Death himself, forever scarred by the herbwitch's poison her mother used in her futile attempt to end her pregnancy. Branded with a scarlet scar, feared and shunned for a parentage over which she had no control, Ismae's hopes of escaping her brutal father are crushed when the man he sold her to at the age of fourteen proves just as monstrous. But help arrives from an unexpected quarter when the selfsame herbwitch whose poison left her forever marked as Death's daughter spirits Ismae away on her wedding night, sending her to the legendary convent of St. Mortain. At St. Mortain the gods of old still hold sway, especially Master Death, with every member of the female-only sanctuary dedicated to execute Death's bidding. Ismae embraces the refuge the convent offers, and dedicates herself to her studies, determined to prove worthy of the reprieve she's been granted, vowing to never disappoint Death or her abbess.

Three years pass, and at long last Ismae is ready to put her training as one of Death's assassins into practice. Having successfully completed her first two missions, Ismae is positive her future at the convent is all but assured -- until the enigmatic Gavriel Duval arrives, throwing everything Ismae's been taught to believe about the convent and her calling into question. Duval serves Anne, heiress to the duchy of Brittany, a would-be leader under siege as forces from within and without her kingdom seek to control the young ruler through marriage. But Anne is loathe to cede control of her destiny, an aim Duval has sworn to uphold -- a vow he'll do anything to keep, even if it means reluctantly allying himself with one of the assassins of St. Mortain. Ismae is equally reluctant to trust Duval, as the man is the physical embodiment of everything she's hates about her pre-convent life. But amid the glitter of Brittany's court, the assassin and the warrior find themselves drawn ever closer as the dangers threatening Brittany's sovereignty seek to destroy its young ruler. And when those Ismae serves calls Duval's loyalty into question, she's faced with an unthinkable choice -- serving her god or saving the man who has won her heart.

Grave Mercy has been on my radar for a while now, mostly thanks to its gorgeous cover image and fascinating premise. Going into the novel I assumed it was a fantasy, given the concept of women meting out Death's justice, so I was surprised by the novel's almost straight historical tone. LaFevers weaves the lore and machinations of the convent into the history of Anne of Brittany's struggle to maintain a free and independent duchy. As such this is a surprisingly gritty depiction of the lives of women in the Middle Ages -- whereas much fiction set during this time period (i.e. romances), particularly one classified as young adult, might choose to gloss over the sexual politics of the time period, Grave Mercy confronts those issues head-on. Though of vastly different social backgrounds, both Ismae and Anne are pawns to be bartered in marriage upon barely reaching puberty -- a reality that uncomfortable and shocking by today's norms. Seeing these young women fight for the right to some measure of self-determination is an extraordinarily gripping journey, one that feels both wholly organic to the fifteenth-century time period and contemporary with its vibrantly-penned characters and their life-and-death struggles.

Love story spoilers: Ismae and Duval's love story is simply one of the best I've ever read, in or out of this genre. Each is in their own way damaged by the accident of birth -- Ismae as one of Death's daughters, Duval as one of the illegitimate sons of the late duke's much-loathed French mistress. There is the inevitable clash of personalities -- the Darcy/Elizabeth spark, if you will, where each is completely convinced of the rightness of their cause and doubts the trustworthiness of the other. And, given Ismae's horrifically abusive upbringing and short marriage, she has every reason to be wary of men's motives. The manner in which Duval comes to earn Ismae's trust, proving his honorable character, while she in turn learns think for herself, to examine the longings of her heart and question the dictates of her convent, thereby opening herself to the possibility of a relationship, is gorgeously rendered on the page. The tension between the pair is electric, the restrained passion positively, deliciously breathtaking. This, this is how you pen a memorable romance -- a meeting of two equally powerful, passionate personalities who respect each other enough to work through their issues before committing to each other. Easily one of my favorite literary couples of the year.

I was fascinated by the tension between the gods acknowledged by the convent and the rest of the world, particularly in how Ismae accepts the convent's definition of faith and devotion, thereby dictating her role in the world. But as the novel progresses, and Ismae realizes that her only hope of truly serving her god, of succeeding in a relationship with him lies in a personal relationship and understanding of her calling, I couldn't help but relate her awakening to my own spiritual journey. There's a passage towards the end of the novel that I found extraordinarily moving, when Ismae meets her father face-to-face: "He has given me life, and all I must do to serve Him is to live. Fully and with my whole heart" -- the social conventions of belief must follow a personal relationship in order to reach its full potential.

Grave Mercy is a rich, meaty historical with an unforgettable heroine and a fascinating premise. The first quarter of the novel is bogged down by some uneven pacing as LaFevers establishes her world -- the narrative can't seem to land on whether it wants to focus on the world of the convent or the historical realities  facing Brittany in the late fifteenth-century. But once Ismae's initial training period is over and she joins Duval in the glittering Breton court, every aspect of the story begins to click, from Ismae's struggles to the intrigue facing Anne, and the pages positively flew as I found myself immersed in Ismae and Duval's world. This is a gorgeous, captivating novel, with a heart-stopping romance, gorgeously-rendered characters and an engrossing blend of fact and fiction. I cannot wait to visit this world again -- this one's a keeper.

Why be the sheep, when you can be the wolf?

Seventeen-year-old Ismae escapes from the brutality of an arranged marriage into the sanctuary of the convent of St. Mortain, where the sisters still serve the gods of old. Here she learns that the god of Death Himself has blessed her with dangerous gifts—and a violent destiny. If she chooses to stay at the convent, she will be trained as an assassin and serve as a handmaiden to Death. To claim her new life, she must destroy the lives of others.

Ismae’s most important assignment takes her straight into the high court of Brittany—where she finds herself woefully under prepared—not only for the deadly games of intrigue and treason, but for the impossible choices she must make. For how can she deliver Death’s vengeance upon a target who, against her will, has stolen her heart?
Posted by Unknown at 7:42 PM

I loved loved this one and I don't normally love conventional HF.

you had me at darcy and elizabeth spark

Okay, this one has been on my radar for ages! And on my Kindle a while too. Now you've totally convinced me I need to move it up my ro-read pile. Thanks, Ruth! :)

Been curious about this one for a long time, Ruth. Glad you reviewed/shared it.

The cover is gorgeous and who can ever tire of an Elizabeth/Darcy spark!? ;)

I liked this book but for me, it couldn't live up to all the hype I had heard about it beforehand. I ended up loving the sequel Dark Triumph so much more-will be interested in seeing your thoughts on that one!