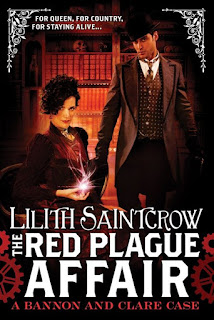 In the years since the Iron Wyrm Affair marked the beginning of Bannon and Clare's unorthodox -- but highly effective -- partnership, the two have become a formidable team in service to Britannia, the ruling spirit of the land currently residing in the vessel of a young Queen Victrix. But recently mentath Archibald Clare has found his considerable intellect distracted from his service to the Crown by a personal vendetta -- the search for his arch-nemesis, the wily criminal mentath Professor Vance. When Clare's obsession begins affecting his health and work, sorceress Emma Bannon finds herself forced to intervene. Britannia has commissioned its most loyal Sorceress Prime to retrieve a wayward doctor tasked with developing a secret weapon for the defense of the realm. Emma has never before questioned a commission from her queen, but when the doctor in question turns out to have an agenda that threatens the realm's own subjects, Emma begins to question her own blind loyalty to the ruling spirit of the land. Bannon and Clare find themselves in a race against time to stop an outbreak that threatens every loyal subject of the Crown. And when one in the Bannon-Clare partnership threatens to fall, the other will find themselves drive to extraordinary lengths to save the other, their polar opposite who has become an unexpectedly dear, indelible part of the other's life.

Saintcrow is on a fast-track to become a favorite author with her Victorian-era steampunk novels, as this, her second in the Bannon and Clare series (third if you count the American-set The Damnation Affair) is perhaps her best yet. This homage to a steampunk-era Sherlock Holmes is a wholly entertaining, page-turning thrill ride that further explores the laws and mechanics of Saintcrow's steampunk universe, while deepening the characterizations and relationship between her two principle players. This time around, the narrative seems more balanced between both Clare and Bannon's perspectives, shading each intensely private character with greater emotional depth. And perhaps because the stakes have never been higher -- or more personal -- for the dedicated sorceress and the brilliant mentath, this installment lays critical groundwork for their future relationship as well as providing fascinating glimpses into each character's shadowed history.

Within the pages of The Red Plague Affair, Saintcrow has a lot of fun playing with the her own variation on the character of Sherlock Holmes and the tropes of Sir Arthur Conan Doyle's classic stories. Here Clare the mentath, the brilliant logician, encounters that most dangerous of adversaries -- boredom. That, coupled with the use of addictive substances to sharpen his faculties, brings Clare to the brink of death as his battered body threatens to give way even as his mind seeks ever higher levels of challenge. I adored the manner in which Saintcrow introduces Clare's Moriarty -- Professor Vance has become Clare's latest obsession in lieu of a more challenging case, and when the two are forced into an uneasy partnership the chemistry and humor that results from the meeting of two such brilliant minds is tremendously entertaining.

Emma Bannon, Sorceress Prime of the iron will, is given far greater depth here, as Saintcrow delves into Emma's poverty-stricken past and the cost of service to the crown. This novel smartly introduces shades of grey into Emma's previously black and white view of her government service, which forces her to re-evaluate her previously unquestioning allegiance to blindly follow Britannia's dictates, particularly when those missions begin to threaten the lives of those she holds most dear.

It is perhaps early to speculate whether or not Saintcrow's "endgame" for Bannon and Clare includes a romantic component. I've always been of the school of thought that Sherlock loved Irene Adler in his own way, so there is an inherent appeal in the latent possibilities and simmering chemistry that exists between Emma and Archibald. I absolutely loved how Saintcrow teases readers with the depth of the pairs' feelings for each other, not yet taking the leap but dancing around the issue, teasing out the attraction and the will-they-or-won't-they tension to delicious levels. If Saintcrow is building towards a romance, it promises to be an unforgettable one as the unlikely pair of Bannon and Clare are truly a perfect intellectual match, and I for one cannot wait to see where Saintcrow takes this pair next -- particularly since Clare has yet to discover the lengths to which Emma and her illogical sorcery was willing to go in order to save his oh-so-logical life. *wink*

The Red Plague Affair is a wildly entertaining slice of steampunk-colored, adventurous escapist fiction. The pages flew as I quickly became wholly invested in the latest chapter of Bannon and Clare's story, the excitement and tension building to a fevered pitch that doesn't let go until the final chapter. Saintcrow paints her canvas of Victorian England with charismatic, compelling leads, colorful, well-drawn supporting characters, and action sequences that feature a positively cinematic flair. This is pure, entertaining, candy-coated escapism at its finest -- wildly addictive, page-turning fun guaranteed to leave you wanting more. I cannot WAIT for the next installment of Bannon and Clare's thoroughly entertaining adventures.

The service of Britannia is not for the faint of heart--or conscience...

Emma Bannon, Sorceress Prime in service to Queen Victrix, has a mission: to find the doctor who has created a powerful new weapon. Her friend, the mentath Archibald Clare, is only too happy to help. It will distract him from pursuing his nemesis, and besides, Clare is not as young as he used to be. A spot of Miss Bannon's excellent hospitality and her diverting company may be just what he needs.

Unfortunately, their quarry is a fanatic, and his poisonous discovery is just as dangerous to Britannia as to Her enemies. Now a single man has set Londinium ablaze, and Clare finds himself in the middle of distressing excitement, racing against time and theory to find a cure. Miss Bannon, of course, has troubles of her own, for the Queen's Consort Alberich is ill, and Her Majesty unhappy with Bannon's loyal service. And there is still no reliable way to find a hansom when one needs it most...

The game is afoot. And the Red Plague rises.

The fantastic follow-up to The Iron Wyrm Affair, set in an alternate Victorian world where magic has turned the Industrial Revolution on its head.
Posted by Unknown at 5:45 PM