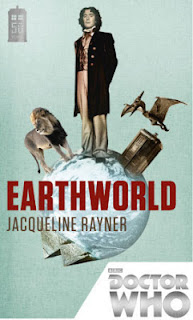 When an amnesiac, recovering Eighth Doctor, long-time friend Fitz, and new -- and reluctant -- companion Anji land on a planet that looks an awful lot like the Earth they know, but isn't, they are of course forced to investigate the anomalies. Reeling from the recent death of her boyfriend and the knowledge that time travel exists, Anji has little tolerance for embracing the Doctor's penchant for investigating the strange and unusual, but even she cannot deny that this Earthworld wrong, with its random dinosaurs, Egyptian pyramids, and warped reality twist on Arthurian legend. For Earthworld is nothing but a theme park, an off-shoot of the New Jupiter that comes into existence far after Anji's own, safely familiar twenty-first century. But this park hides a dark secret -- it's little more than the glorified playground for three homicidal, technologically brilliant teenage girls for whom death is the ultimate game. And now Anji, Fitz, and a Doctor left reeling from an unfathomable loss are caught in their web and marked as their latest prey...

Jacqueline Rayner became one of my favorite Who authors after I read two of her novels a few years ago -- Winner Takes All featuring Nine and The Stone Rose featuring Ten, both with Rose as the Doctor's companion. I was left impressed with her ability to bring the Doctors I know and love to life on the page, and couldn't resist the chance to explore her early Doctor Who fiction -- particularly since I've always liked the physical embodiment of the Eighth Doctor, actor Paul McGann. :)

While Earthworld contains all of the elements I've come to expect in a Who novel -- colorful, exotic settings, deathly peril, and an enjoyable rapport between the Doctor and his companion(s) -- I found myself somewhat hampered by my lack of grounding in a pre-Nine world (I've yet to see the Eighth Doctor's sole filmed adventure in its entirety). Events and people are referenced, and without the rudimentary knowledge of the Eighth Doctor's  history provided in the author's note, I would've been completely lost.

As a result, the first half of the novel was a bit of a slow go for me, seeming a touch less polished than Rayner's subsequent Doctor Who fiction. While the story is an enjoyable enough "episode," I never really connected with the characters in same manner I'm able to do in Who fiction that features Doctors I know and love from the television show. That said, approximately halfway through the novel a slow readjustment occurs, and these characters -- especially the Doctor -- began to remind me of just why I love this show so much. And, wonder of wonders, this new-to-me incarnation of the Doctor began to remind me of the best aspects of Nine, Ten, and Eleven -- their energy, compassion, and boundless capacity for wonder. In what at first appears to be a rather run-of-the-mill, even generic Who tale, Rayner builds towards one of the most poignant conclusions I've read or seen when it comes to this universe, a beautiful illustration of the bond that develops between the Doctor and even the most (initially) recalcitrant of companions, and by extension the reader's bond with the Doctor and his many worlds -- life in the midst of heartbreak, and the power of new beginnings.

Anji has just had the worst week of her life. She should be back at her desk, not travelling through time and space in a police box. The Eighth Doctor is supposed to be taking her home, so why are there dinosaurs outside? The Doctor doesn't seem to know either, or else he surely would have mentioned the homicidal princesses, teen terrorists and mad robots? One thing is certain: Anji is never going to complain about Monday mornings in the office again.

*Thanks to TLC Book Tours for the review opportunity!
Posted by Unknown at 12:44 PM

I have to admit that I don't know much about this incarnation of the Doctor but as a huge fan of the show I'm interested in reading all of the books in this series so I can get to know the earlier Doctors in particular.

Thanks for taking the time to read and review this book for the tour!

@heathertlc - Thanks! I'm so glad I got to participate in this tour and get some insight into one of the Doctor's earlier incarnations. :)