Review: A Big Hand for the Doctor by Eoin Colfer 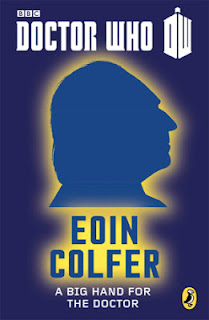 In honor of Doctor Who's fiftieth anniversary in 2013, Puffin announced plans to publish one story each month, each featuring one of the Doctor's eleven incarnations. Eoin Colfer was tapped to deliver the first story, featuring the First Doctor as portrayed by William Hartnell. Since I came to love Doctor Who with the show's resurrection under Russell T. Davies and Nine (Christopher Eccleston), I have a difficult time judging fiction featuring pre-Nine incarnations of the Doctor, as I have so little experience with the original program. That said, I was excited to read Colfer's offering into the Who-universe, as having read a few of his Artemis Fowl novels several years ago I was impressed by his imagination and humor.

Hartnell's Doctor always struck me as rather grandfatherly and frail, an opinion immediately borne out within the pages of this story as I learn that the Doctor's first companion was his granddaughter, Susan, and his mannerisms are suggestive of an old curmudgeon. *wink* The whole plot line involving a bio-mechanical hand and the Soul Pirates is suggestive of the 2005 Christmas special, "The Christmas Invasion," with the Sycorax, a sword fight, and the newly-regenerated Ten regrowing his own lost hand. While I can't really speak to how Colfer's Doctor compares to Hartnell's portrayal, personally I enjoyed the chance (albeit a short one) to see the Doctor interact with a family member in an adventure that recalls one of my own favorite Ten episodes. Though the story itself is barely fleshed-out at a slim forty-odd pages, is nonetheless an entertaining example of both Colfer's imagination and a concept that fits comfortably within the Doctor's universe.

Some criticisms of this story allege that this Doctor is too much of the "Nu-Who" generation, and indeed it's hard to dismiss that allegation when you have this allegedly old man turning into something of an action hero in the second half of the story. I have mixed feelings about this -- on the one hand, I like the idea of writing an old Doctor adventure but updating his point-of-view to include current cultural touchstones, but on the other hand I'd like a clear, engaging snapshot of the Doctor as he was at the beginning of his adventures. That's the rub with time travel -- the show itself is very much a product of its time, but we forget that it's all out of order too. *wink* I wish Colfer had been given the chance to write a full-length adventure featuring Eleven as I think he'd be a perfect fit for Matt Smith's quirks and energy -- but that being said I enjoyed this short story -- especially the epilogue -- and look forward to checking out more of these short stories.

London, 1900. The First Doctor is missing both his hand and his granddaughter, Susan. Faced with the search for Susan, a strange beam of soporific light, and a host of marauding Soul Pirates intent on harvesting human limbs, the Doctor is promised a dangerous journey into a land he may never forget... 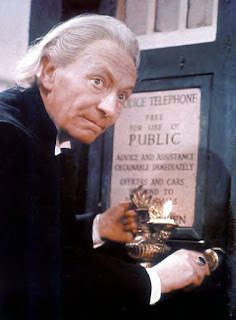 Do you know who else is on to write a story?

Let's see, Two's story is written by Michael Scott, Three's by Marcus Sedgwick, Four's by Philip Reeve, Five's by Patrick Ness, and Six's by Richelle Mead (I don't know any of these people, lol!). The other authors haven't been announced yet.