Review: The Crown by Nancy Bilyeau 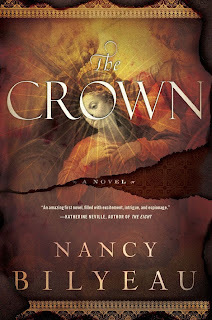 Joanna Stafford forsook the life of a noblewoman that was her birthright as a niece to the Duke of Buckingham for a life of seclusion and spirituality as a Dominican novice at the famed Dartford Priory. These are turbulent times in which to dedicated oneself to the service of the Catholic Church, as ever since Henry VIII obtained the dissolution of his marriage from Katherine of Aragon, the monasteries and priories so beloved by that queen and her supporters have found themselves under attack. All are threatened with dissolution at best, torture and a martyr's death at worst for not bowing to Henry's edict demanding they swear an Oath of Supremacy, binding them to the king first and foremost and ceding to the authority of the new Church of England. But safely ensconced within Dartford's walls, Joanna paid little heed to the tumult of religious politics consuming the outside world, until she receives news she cannot ignore - her beloved cousin has been sentenced to death. Lady Margaret Bulmer may pay with her life for opposing the dissolution of the monasteries and priories, but Johanna determines she will not die alone, and defying the rules of enclosure embarks on a dangerous journey to Margaret's appointed place of execution.

But the day of Margaret's death nothing goes as planned. When Johanna's father attempts to interfere with the execution, both he and Johanna are arrested and thrown into the infamous Tower of London on suspicion of treason. While incarcerated within the Tower's formidable walls, Johanna finds herself the unwilling pawn of the ruthless Bishop of Winchester, Stephen Gardiner. He arranges for Johanna's release, on one condition -she is tasked with finding the legendary crown of Athelstan, the first king of a united Britain, whose crown is rumored to possess incredible and dangerous powers. The crown is rumored to be hidden at Dartford, and only when it is safely in Gardiner's possession will her father be released. And so Johanna returns to the priory under a cloud of suspicion and mistrust, her sacred home, once a refuge, now heavy with the portent of faceless dangers. For while her father's life hangs in the balance, Johanna is faced with an equally graver choice -- can one who sought the peace of a religious life survive the treacherous machinations of court? And more importantly, can her faith survive the trials and discoveries her search for the crown requires?

People, THIS BOOK. The Crown is a fresh, utterly captivating glimpse into Tudor England through the eyes of those faithful to the old ways, those who fought to preserve a way of life threatened by the politics of lust and power. Its a rare thing to discover a debut so absorbing and masterfully executed -- a pitch-perfect historical that reads like a tautly-plotted thriller. The intrigue of Henry's court has provided endless fodder for fictional retellings, from the television show The Tudors, numerous films, and countless novels examining the lives of Henry and his wives. Bilyeau smartly sets her debut outside the court proper -- its influence is felt, but The Crown stands apart by showcasing the ripple effect of Henry's policies on those who sought to live their lives and faith outside the court-proscribed norm.

The Crown is positively saturated with the history of faith. Through the characters of Johanna and those who join her in her bid to preserve a vanishing way of life, The Crown is one of the most stirring, well-drawn portraits of faith that I've ever read. This is an emotionally-charged, vibrantly-detailed picture of faith under fire, both personally and corporately, never shying from its oft-times brutally honest examination of the nature and cost of belief, doubt, and sacrifice. While persecution between groups of people, be it over religious, ethnic, or political differences, is as old as mankind itself, here I was particularly struck by the tragedy of the conflict between Catholic and Protestant. Both claiming belief in the same God and His Son, and each side in turn guilty of horrors in the name of advancing their faith.

Joanna is a wonderfully compelling, multi-faceted heroine. A fiery mix of faith, devotion, and a fierce loyalty and temper, the latter often putting her at odds with the lifestyle to which she aspires. In a world where women were confined to strictly proscribed roles, Joanna is a woman wholly of her time, yet determined to be her own woman, above all striving to be true to herself, her faith, and her God. Bilyeau's cast of supporting players are equally well-sketched -- and let me just say, I cannot wait to see what Bilyeau has planned for Joanna's relationships with the angst-ridden healer, Brother Edmund, and the DELICIOUS constable, Geoffrey Scovill. :)

The Crown is an expertly-plotted, page-turning thriller replete with a wealth of historical detail and atmosphere, bringing the sixteenth-century to life. Bilyeau peppers the narrative with fascinating detail, everything from feast preparations to medical treatments for seizures. Given Joanna's status as a novice, Bilyeau deftly recreates the world of the priory, the beliefs and traditions that form the bedrock of Joanna's character. And the history of relics -- particularly the Athelstan crown -- the reverence with which they were viewed and shadowy legends that grew up surrounding their history. With her stunning debut Bilyeau has delivered a heady, unforgettable mix of fact and fiction. An author to watch, I cannot wait to see where she takes Joanna next!

Joanna Stafford, a Dominican nun, learns that her favorite cousin has been condemned by Henry VIII to be burned at the stake. Defying the rule of enclosure, Joanna leaves the priory to stand at her cousin's side. Arrested for interfering with the king's justice, Joanna, along with her father, is sent to the Tower of London.

While Joanna is in the Tower, ruthless Bishop of Winchester forces her to spy for him: to save her father's life she must find an ancient relic -- a crown so powerful, it may possess the ability to end the Reformation.

With Cromwell's troops threatening to shutter her priory, bright and bold Joanna must decide who she can trust so that she may save herself, her family, and her sacred way of life. This provocative story melds heart-stopping suspense with historical detail and brings to life the poignant dramas of women and men at a fascinating and critical moment in England's past.

*My deepest thanks to TLC Book Tours for the review opportunity!
Posted by Unknown at 5:37 PM

Hey, I just wanted to say thanks for the great review! I just recently finished reading this book because you recommended it, and I really loved it. I actually come to your blog all the time to read your book reviews, and I'll definitely be coming back to see more of what you post. :D