Review: The FitzOsbornes at War by Michelle Cooper 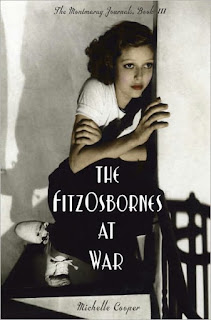 Michelle Cooper completes her heart-stealing epic drama of history and romance with The FitzOsbornes at War.

Sophie FitzOsborne and the royal family of Montmaray escaped their remote island home when the Nazis attacked. But as war breaks out in England and around the world, nowhere is safe. Sophie fills her journal with tales of a life during wartime. Blackouts and the Blitz. Dancing in nightclubs with soliders on leave. And endlessly waiting for news of her brother Toby, whose plane was shot down over enemy territory.

But even as bombs rain down on London, hope springs up, and love blooms for this most endearing princess. And when the Allies begin to drive their way across Europe, the FitzOsbornes take heart—maybe, just maybe, there will be a way to liberate Montmaray as well.

I am reluctant to write this review, as it means that my time with Sophia and the rest of the FitzOsborne clan has come to an end. The FitzOsbornes at War is the concluding volume in Michelle Cooper's epic Montmaray Journals saga, a gloriously evocative, rich tapestry of prose that evokes the long-lost wonder of a world about to be changed forever by an epic, globe-encompassing war. This third volume picks up shortly after the conclusion of the second, which saw Sophia, her brother Toby, and cousin Veronica risk their lives to plead before the League of Nations for the return of their island kingdom from Nazi invaders. When England at last declares war on Germany, Sophia and her family throw all of their energies into supporting their adopted home's war efforts. This final volume is the lengthiest of the series, covering the years 1939-1945 (plus a short epilogue), as such delivering a veritable treasure trove of historical fact, a richly atmospheric, absorbing snapshot of life on the home front. As aristocrats and exiles of a nation allied with Britain, Sophia and her family are uniquely placed to experience the full range of wartime life, from rationing and air raids to the political machinations of the Foreign Office's attempts to gather valuable intelligence on the situation in Europe. Sophia's final journal not only documents her coming-of-age through the fires of war but serves as a fascinating witness to the turbulent times in which she lived -- a savvy, insightful, and utterly absorbing record of a world and a social class lost to the ravages of time.

A sense of unreality pervades much of the first portion of the novel, detailing the first months of the war. Through Sophia's eyes Cooper explores the disconnect between high-level political machinations and early rationing among the citizenry in the early months of the war, a brief "lull" before fighting commenced in earnest. I loved watching Sophia and Victoria spread their proverbial wings (much to the consternation of their Aunt Charlotte) and seek employment, as working-age men were funneled out of the private sector and into the armed services. The war blew open women's working opportunities (i.e., in the previously "male-only" Foreign Office), and every member of the FitzOsborne clan is determined to "do their bit" to support England, with the hope of freeing Montmaray a closely-cherished, if oft-seemingly futile dream. When Germany begins bombing London, the horrors of war are driven home to those left behind -- the uncertainty and soul-crushing stress of the attacks, and the unimaginable strength an average citizen required to simply endure the onslaught of fire and death pouring from the skies.

This series' greatest strength lies in Sophia as narrator -- remarkably intelligent and savvy, she is nonetheless an "everywoman" character, concerned with the minutiae of everyday life even as she strives to navigate a world consumed by war. Thanks to her aristocratic antecedents and connections to the Foreign Office via Veronica and the omnipresent Colonel, Sophia has a brief career as a pseudo-spy -- a nice touch since it allows Cooper to include familiar figures in the narrative like the Kennedys, Sophia's friendship with Kick gaining her access to embassy functions. But my favorite parts of the narrative are when Sophia is simply living, as everyday life in London under the Blitzkrieg is in essence an existence under siege. Through Sophia and her family, Cooper pays tribute to the men and women of London who refused to be cowed, who persevered, even as Sophia acknowledges what life must be like for average citizens feeling the reciprocal wrath of allied attacks. This is a chronicle of war that acknowledges the toll such conflict exacts upon each and every man, woman, and child whose lives are touched by the violence, even as it is a powerful exploration of the "home front" as its own field of battle.

There is a certain timeless quality to Cooper's writing -- like all youths on the cusp of adulthood, Sophia struggles to find her place in the world, her purpose, cope with disappointment and heartache, and hopes for love. Every character that inhabits Sophia's world is achingly real and complex. Over the course of three volumes one becomes extraordinarily invested in every detail Sophia shares on the page -- and therein lies a certain heart-breaking genius to Cooper's writing. One moment the reader rejoices with Sophia over some small victory, only to have the book steal your breath with the next entry as fate deals Sophia and her family a crushing blow. This glossy history seduces readers with unforgettable characters, lush descriptions, and well-meted detail -- and whether documenting a hard-won victory, the thrill of love realized, or the tragedy of loss, through Sophia's journals Cooper immerses her readers deeply within her characters' gloriously-rendered, Technicolor-hued lives.

The FitzOsbornes at War is the crowning jewel in the Montmaray Journals series, a heady, intoxicating, unforgettable blend of fact and fiction. Sophia is one of the most engaging narrators I've ever had the pleasure of "meeting" via the page, and her ruminations on life and love, family and world affairs are humorous, intelligent, and often positively raw in their honesty. Even in exile Cooper plays with the idea of home and family, for though Montmaray may fall, what it represents -- the idea of home, the importance of one's history, an ever-moving, evolving symbol of family -- shines through, making Sophia's journals a timeless, relatable chronicle of the time in which she lived and in a broader sense, of the human experience. This is historical fiction at its finest, a journey worth taking and not to be missed.
Posted by Unknown at 5:38 PM

This sounds really good! I'm getting the first book of this series for Christmas and can't wait to read it. :)

@Kristin - I hope you enjoyed it! Have you read the series yet?