Review: Across the Universe by Beth Revis 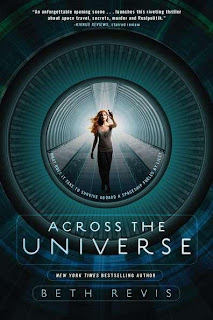 Amy is a cryogenically frozen passenger aboard the spaceship Godspeed. She has left her boyfriend, friends -- and planet -- behind to join her parents as a member of Project Ark Ship. Amy and her parents believe they will wake on a new planet, Centauri-Earth, three hundred years in the future. But fifty years before Godspeed's scheduled landing, cryo chamber 42 is mysteriously unplugged, and Amy is violently woken from her frozen slumber.

Someone tried to murder her.

Now, Amy is caught inside a tiny world where nothing makes sense. Godspeed's 2,312 passengers have forfeited all control to Eldest, a tryannical and frightening leader. And Elder, Eldest's  rebellious teenage heir, is both fascinated with Amy and eager to discover whether he has what it takes to lead.

Amy desperately wants to trust Elder. But should she put her faith in a boy who has never seen life outside the ship's cold metal walls. All Amy knows is that she and Elder must race to unlock Godspeed's hidden secrets before whoever woke her tries to kill again.

When Amy's parents are chosen to participate in Project Ark Ship aboard the Godspeed -- her mother for her scientific knowledge, her father for his military expertise -- Amy is given the option of joining them as a "nonessential" passenger. But saying yes to the Godspeed means giving up life as she knows it -- family, friends, her world -- for the participants in Project Ark Ship are being cryongenically frozen, set to awaken 300 years in the future when the Godspeed is scheduled to reach Centauri-Earth and their knowledge is needed to seed life on humanity's new planetary home. Terrified of life without her only family, Amy agrees to be frozen and consigns herself to a never-waking nightmare, a dream existence where her frozen body is powerless to stop her racing imagination.

Centuries later, Elder, the teenage heir to Eldest, the all-powerful leader controlling every aspect of life aboard Godspeed, from the workers' reproductive lives to their very purpose aboard ship, discovers a secret -- the existence of the cyro chambers and their frozen cargo. Elder is the leader who was never meant to be, the replacement heir, and as such is one who insists on testing the boundaries of the controlling Eldest's authority. When cyro chamber #42 -- Amy's -- is unplugged, nearly killing her, Elder is fascinated by this girl from another time and place, a relic of old Earth, whose flame-red hair denotes an individuality that threatens the centuries-old way of subservient, unquestioning obedience that characterizes life aboard Godspeed. As a relationship blossoms between Elder and Amy, the two teens find themselves locked in a struggle for survival against an unseen and deadly enemy -- one who seeks to quell any hint of individuality and rebellion. But the power of questions, the power of free will proves to be an irresistible lure, and Elder and Amy find themselves at the center of an unlikely battle for the very soul of Godspeed and her passengers, with the future of mankind hanging in the balance.

Last month I was able to attend a booksigning where Beth Revis spoke about her writing process and inspiration for Across the Universe -- in short, a murder mystery in space. I've always had a weakness for space operas -- epic, fast-paced, other-worldly adventures -- stories of that ilk have an ability to captivate the imagination like no other. And on that score, Across the Universe delivers in spades. This is a thick, meaty novel, consisting of alternating chapters between Elder and Amy's points-of-view. With many of the chapters consisting of a single page, Revis establishes a rapid-fire sense of pace and tension that manages to sustain itself throughout the novel's 400 page-length. With its claustrophobic, contained setting wherein those who question authority have no hope of outside recourse and support but their own wits and determination, the resulting product is a thoroughly engaging novel that kept me entertained from the start.

That said, for all Revis focused on only two points of view they remain, in the end, frustratingly out of focus, a touch flat. Given the "hive" mentality Elder grew up surrounded by, that reticence towards vibrant self-expression is somewhat understandable. But as Elder is positioned as the lead -- and a romantic one at that -- I hope in subsequent volumes he develops into a more fully-realized character, dare one say it? -- more of an alpha, a leader of men with a touch of charisma worthy of the title, but the humanity and empathy necessary for a believable connection with Amy. Revis needs to work on penning a more authentic male voice, as Elder's is a tad effeminate which makes the burgeoning romance between him and Amy fizzle rather than spark. Amy is an engaging, more realized character, and while she spends a fair amount of page time bemoaning her fate (understandably), I'm looking forward to seeing how she navigates this brave new world she's been unceremoniously thrust into.

For all it can be argued that Revis's debut lacks subtlety, her writing possesses an infectious and promising energy that leaves me with high hopes for the second and third volumes in the trilogy. Now that the "murder mystery" aspect of the storyline has been resolved (or more accurately, devolved into a non-issue), and the secrets of Godspeed revealed, I look forward to seeing Elder and Amy navigate the fallout from the revelations of the latter. With more nuanced character development and forward-moving plot momentum, Revis is poised to deliver a thoroughly entertaining space opera. Across the Universe marries a dystopian vision of the future with the heart of a thriller and a dash of romance, touching on issues of freewill vs. predestination and individuality vs. conformity. A rollicking adventure from start to finish, Revis's debut marks her as an author to watch.
Posted by Unknown at 9:42 AM

This looks like the kind of book I could really enjoy! Thanks for the great review! :D

I'm glad you liked this one! I'm going to reread it in December (and read A Million Suns for the first time), since the last book is coming out in January. I've been really anxious to pick it up again lately. :)

My name is David and the reason I'm writing is because I have a book coming out this month. I am looking to give a few free copies away to people who are willing to post a review on it (on amazon and on their website if they would like). I wanted to ask if you would like to participate?

The book is titled Jesus Beside Me. It's a collection of 30 mediations on the words of Christ as they appear in Matthew's gospel. The book is both devotional and mindful. I would love if you'd be a part of its launch by reviewing it early.

Thank you for your consideration. I hope you have a great weekend!
You can contact me at davidxramos@gmail.com

In Him
David Ramos

@offsetinnocence - Thanks for your interest in my blog, but I'm unable to accept additional review requests at this time. Good luck!