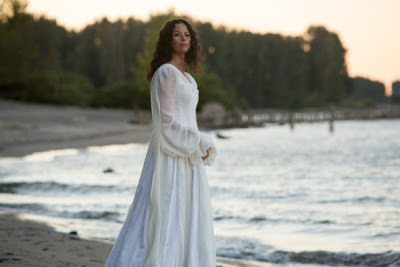 Last week Grimm made a splash in the ratings with "La Llorona," the much-hyped Halloween episode. Which is really ironic, because isn't every episode of this show more or less a little slice of Halloween? *wink* In a change of pace for this show, the writers based this episode's storyline not on a traditional fairy tale, but on the Hispanic legend of "La Llorona," the Weeping Woman. In a world filled with the strange and inexplicable, it was wonderful to see these characters grapple with something that falls far outside even their wide experience with the weird, whacky, and oft-times frightening world that exists just outside of "normal."

This episode opens with a father and son enjoying a fishing excursion along the Willamette River. Just as they're settling in, the father, Luis (David Barrera -- he's appeared in everything from Fairly Legal to Human Target to In Plain Sight) notices a disturbing sight. A weeping woman (Angela Alvarado), dressed in a flowing white gown, is slowly walking deeper and deeper in the water, apparently intent on suicide. Rushing to her aide, Luis leaves his son on the pier to watch while he desperately tries to pull the woman back to shore -- but she cannot be found. After several futile dives, the would-be rescuer emerges for air to a horrifying sight -- the woman in white leading his son, Rafael (Joseph Aceves) away. He gives chase, but when he emerges onto the parking area near the river the pair is no where to be found.

I love the set-up for this mystery. Even the way in which this opening sequence is shot has a more movie-like feel to it than previous episodes. It seems that Grimm was intent upon delivering an "event" episode and pulled out all the stops in order to achieve that aim. This tonal "shift" continues with our first glimpse of Nick (David Giuntoli) opening the weapons cache in Aunt Marie's trailer, and solemnly selecting a vicious, spiked Morning Star. I was SURE that Nick was on the trail of a particularly aggressive Wesen, but instead the show is just playing with our expectations as it is shortly revealed that he's delivering the Morning Star to Monroe (Silas Weir Mitchell). Remember how much Monroe loved Christmas? Well no surprise I'm sure but he goes even MORE all-out celebrating Halloween (it seriously looked like the set designers dumped several stores' worth of tacky, spooky decor on his lawn!) and wanted a Morning Star to smash pumpkins and scare the kids -- a weapon Nick hands over with understandable trepidation. I think my favorite line during this exchange was Monroe's off-hand comment about the Wesen tradition of transforming on Halloween and scaring the crap out of villagers (often literally, ha!!). 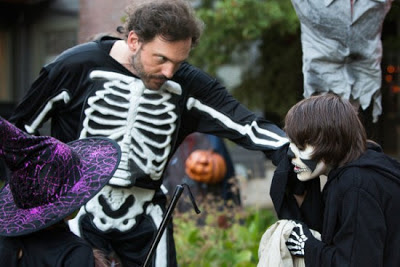 Just as Nick gets the call notifying him of Rafael's kidnapping, a woman across the country wakes from a nightmare involving a ghostly woman in a river. It becomes quickly apparent that she is some sort of investigator, as her walls are littered with maps and reports -- but most significantly, a suspect sketch of a woman identical to the one who took Rafael. In short order it is revealed that this mystery woman is an investigator (she books a flight to Portland when a national Amber Alert breaks for Rafael) and a Wesen (correct me if I'm wrong, but isn't this the first Wesen we've "met" in law enforcement? Not counting Renard... *wink*) -- a Balam, or jaguar-like creature with gorgeous, blue-tinged fur. Balams apparently tend towards obsessiveness and are extremely clannish, both qualities that the actress playing this role manages to convey extraordinarily well. This is probably one of the show's best examples of having a human character exhibit qualities unique to his or her Wesen counterpart that I can think of.

Meanwhile, back in Portland Nick and Hank (Russell Hornsby) are investigating the scene of Rafael's disappearance. Since Luis doesn't speak English, and the department's only official translator is apparently MIA, Nick calls Juliette (Bitsie Tulloch) in to help -- isn't that oh-so-convenient? :) This development leads to Juliette and Renard (Sasha Roiz) making eyes at each other (how no one else notices this is beyond me) and driving me INSANE. It's also an excuse for a brief reappearance of Ryan the klutzy intern (Michael Grant Terry), who at this point seems to exist for no other purpose than to provide brief comic (not to mention awkward) moments. Surely that isn't the only point for this character's introduction...??

With Juliette serving as translator Nick and Hank move the investigation to Luis's home. The Halloween/Day of the Dead decorations are a nice reminder of this episode's roots in Hispanic lore, a nicely atmospheric touch. While there is little forward momentum in discovering who is behind Rafael's kidnapping, Juliette is singled out by a family friend, Pilar (Bertila Damas), come to offer her support to Luis. But Pilar is a surprisingly unwelcome presence in his home, as she is convinced that Rafael was taken by the ghostly "La Llorona," a suggestion the increasingly frantic Luis rejects out of hand. Damas lends Pilar the look and manner of a mystic, which goes a long way towards explaining her unexpected interest in Juliette's "aura" and the cat-scratch scars on her hand. I LOVED this, because honestly with all of the weirdness in Portland I thought it was beyond time that SOMEONE picked up on Juliette's brush with dark magic! When Pilar attempts to counsel Juliette that she'll soon have to choose between essentially two loves, Juliette quickly becomes defensive -- clearly this is a sort spot. And I LOVE that because it is a tantalizing promise of further  dramatic conflict between her, Renard, and Nick. Her role as emergency translator felt extraordinarily contrived, but to my mind her scene with Pilar was worth the narrative stretch. :)

The Wesen detective, Valentina (Kate del Castillo), finally arrives in Portland with a thick file of information on similar missing children cases. In each instance that she's tracked, three children are taken on Halloween night and turn up dead the next morning. This leads to a discussion of the perpetrator's modus operandi, mirroring the La Llorona legend. In that story, a woman is scorned by her husband, rejected in favor of another woman, and seeks revenge on her husband by drowning their children. Grief-stricken and remorseful, the woman in question goes insane, crying for the children she killed. Valentina suspects that their suspect is a serial killer modeling herself after the legend (which would be EXTRAORDINARILY creepy as is, but given that this is Grimm, of course there's more to this story than meets the eye).Interestingly enough Valentina's sudden appearance and obsessive passion for this spate of crimes arouses Renard's suspicion, and he requests her file from the Albuquerque PD. (Side  note: Could he have recognized she was a Wesen and been extra suspicious as a result? Or are we thinking this was just conscientious police work?) 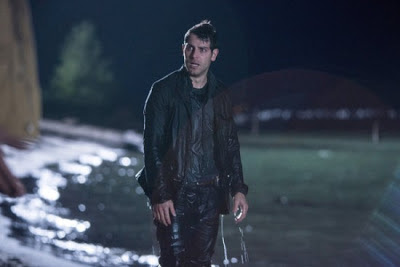 True to Valentina's predictions, the woman in white takes another child. Interestingly enough the locations of the abductions around the confluence of the Williamette and Columbia Rivers mirror the previous cases, all of which occurred at three points around similar bodies of water. While investigating the crime scene at the Columbia location, Renard shows up with the FBI and has Valentina arrested for impersonating an officer -- it seems her obsession with the La Llorona killer led to her dismissal from the Albuquerque force. When questioned she admits that her obsession with La Llorona is in fact extraordinarily personal -- her nephew was taken and killed by the weeping woman when she appeared in Albuquerque years before. Nick and Hank decide to investigate Nick's family archives and are troubled to discover that while previous Grimms encountered this weeping woman, none could provide a satisfactory (and corporeal) explanation for her existence. Taking matters into their own hands, Nick and Hank opt to release Valentina and leverage her knowledge of La Llorona, a task made all the more pressing by the news that the third child has been taken.

I absolutely LOVED how the final confrontation with the weeping woman played out on-screen. The eerie scene of her walking the three entranced children to the water's edge, calling up a vision of her own long-dead children was nicely chilling. And Nick's frantic race into the water and subsequent struggle with the woman -- loved it! (Sort of reminded me of the Once episode that introduced the Lady of the Lake!) At first I thought that Nick's "Grimm" blood might force the woman to transform into a decaying corpse or something -- but the show made instead a better call, leaving the storyline eerily unresolved. At the stroke of midnight the woman releases Nick from their fight and sinks into the depths of the river -- and that is probably more unsettling for Nick, Hank, and Valentina than anything else they've encountered that hour. I LOVE the fact that the woman just disappears, leaving more questions than answers in her wake...a nice and creepy touch, leaving Nick & company wondering whether or not she'll make a reappearance! :)

So all's well at ends well -- for these three children and their families at any rate. Back to Monroe for a second -- I adore his enthusiasm, and how cute was the moment when he saves a trick-or-treater from bullies? "Thank you Mr. Monroe!" ADORABLE. I also thought it was a fun touch having him morph into his Blutbad form to scare those same bullies who decided they needed to break his window with the Morning Star. While this episode touched on the on-going storyline involving Juliette and Renard's unspoken mutual attraction, it opted to shift focus from the regular Grimm/Wesen mythology and deliver a nicely creepy hour that even a full-fledged Grimm struggled to come to terms with. A solid, thoroughly enjoyable hour -- but given this teaser from tomorrow's episode, I can't say I'll be sorry to return to the show's current on-going storylines. :)
Posted by Unknown at 3:10 PM

This episode was REALLY good. You're right, it definitely had a cinematic feel to it. It was like a little mini-horror movie! The way Hank and Nick kept pronouncing lallorona did kind of drive me crazy, though.

I was really hoping Juliette would ask Pilar how to get rid of her curse so we could finally find out what happened to her, but I guess that would take the fun out of things... :)

@Tasha B. - The more I think about this ep, the more impressed I get! ;) The show took a bit of a gamble with form and tone here and it paid off in spades.

At least Pilar planted the idea of a curse in Juliette's mind...it would be fun if Juliette visited her again at some point. :)

I for once didn't like it that they haven't explained what she was.
In general, I am not a big fan of open endidnngs. It's like the people of write those stuff take the easy way out and does not have to come up with a logical answer but hey, it's just me.