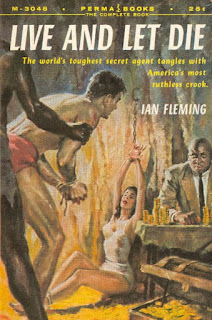 "Her hair was blue-black and fell heavily to her shoulders. She had high cheekbones and a wide, sensual mouth, and wore a dress of white silk. Her eyes were blue, alight and disdainful, but, as they gazed into his with a touch of humor, Bond realized they contained a message for him personally. Solitaire watched his eyes on her and nonchalantly drew her forearms together so that the valley between her breasts deepened. The message was unmistakable..."

Beautiful, fortune-telling Solitaire is the prisoner (and tool) of Mr. Big -- master of fear, artist in crime, and Voodoo Baron of Death. James Bond has no time for superstition -- he knows that Big is also a top SMERSH operative and a real threat. More than that, after tracking him through the jazz joints of Harlem to the Everglades and on the the Caribbean, 007 has realized that Mr. Big is one of the most dangerous men that he has ever faced. And no one, not even the enigmatic Solitaire, can be sure how their battle of wills is going to end...

Live and Let Die, Fleming's second novel featuring James Bond, wastes no time establishing setting or character. Diving immediately into the action, Fleming sets the template for Bond's adventures to come, particularly on the big screen -- globe-trotting, exotic locales, beautiful women, and intense, oft-times over-the-top, action sequences. Here Bond is sent to New York for a joint operation with American CIA operative Felix Leiter, an ally from Bond's Casino Royale days. They are tasked with uncovering the source of the smuggled gold a Mr. Big is funneling through his vast criminal network, funding operations for the likes of SMERSH. But Mr. Big's reach, and the lengths he'll go to in order to maintain control on his criminal operations, are more powerful and extensive than Bond ever imagined. When Big's henchmen strike a lethal blow, Bond's single-minded resolve to exact vengeance places him in unimaginable danger, and his drive for revenge threatens to blind him to the coolly lethal mastermind's greatest weapon -- the most dangerous denizens of the sea itself.

First published in 1954, Fleming's second Bond novel unfortunately does not stand the test of time nearly as well as its predecessor. Because here Bond's nemesis is Mr. Big and his vast criminal network, the African-American community is featured prominently throughout the novel -- and as such Fleming heavily showcases racial attitudes and language that, while it may have been more acceptable during the 1950s, is at the very least jarring to modern readers. Mr. Big fares best here -- as an arch-villain, extremely capable and over-the-top in the best Bond tradition, but his compatriots have aged less favorably, tending towards a hodge-podge of cheap stereotypes. If Fleming had managed to curb his propensity for over-the-top dialect and negative African-American stereotyping, this novel's suspense plotline, no matter how wildly outlandish, would be given freer range to shine unencumbered.

If one can manage to keep the novel within the context of the time in which it was published, roughly a third of the way through the book Fleming (mostly) trades in his unfortunate stereotyping for some really well-done action sequences and nail-biting tension in keeping with the spirit of Bond's debut. I was particularly impressed with Bond's tense introduction to Mr. Big and subsequent escape, and the novel's climatic moment which finds Bond and Solitaire dragged through coral-rich waters as live shark bait. As in Casino Royale, I was once again struck by Fleming's economy of language, his sharp-edged prose that colors his narrative with tension and keeps the reader engaged.

As an American I also found Fleming's rather...acerbic view of the country interesting, to say the least, but this was tempered by the presence of Felix Leiter, my favorite recurring supporting character in the series thus far. I was quite honestly horrified by Felix's fate midway through the novel, but this was somewhat tempered by the resulting exhibition of Bond's loyalty and drive to see one of his few friends avenged. Bond is by no means a consistently well-rounded or progressive character -- first and foremost he is the "blunt instrument" of MI6 -- but thus far in the series I've been favorably impressed by the subtle shades of fallibility that colors his character on the page. There's a brilliant, self-reflective passage about halfway through the book where Bond ruminates on the fragility of life -- and it's brief flashes of humanity, of vulnerability, that bring to mind Craig, my favorite screen Bond.

While the racial overtones of Mr. Big and his henchmen date this installment in the Bond series rather poorly, if one can read this strictly as a product of its creator and the time (for good or ill) in which he lived, Fleming delivers some rollicking action sequences and unexpected moments of self-reflection that make fascinating additions to one's knowledge of the Bond canon.

I'm not sure which cover is tackier (more tacky?) but I think they say it all about this book. ;)

Ugh! That is tacky!