Review: A Princess of Mars by Edgar Rice Burroughs 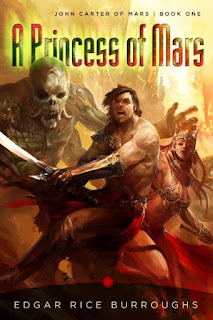 Marooned on a war-torn alien planet...

When Civil War veteran Captain John Carter is incredibly transported from Earth to a strange landscape on Mars, he finds that the weak gravity exponentially increases his speed and strength. Taken prisoner by Martian warriors, Carter impresses them with his remarkable fighting skills, and is quickly made a high-ranking chieftain. Before long, the captain finds himself embroiled in the deadly warfare and dark intrigues that have been polarizing the Martian races. The heroic Carter also finds dangerous romance with the divine princess Dejah Thoris, who wins Carter's love the first moment his eyes meet hers.

A Princess of Mars is the first book in the classic best-selling John Carter of Mars science-fantasy series. Written during the heyday of the pulp fiction era, these epic, swashbuckling Red Planet tales of derring-do and dazzling romance permanently remapped the terrain of fantasy and science fiction.

At the close of the Civil War, Confederate cavalryman John Carter found himself to be a man without a country -- and so he bid farewell to his native Virginia and headed west in search of gold. While attempting to save his prospecting partner from an Apache attack, Carter seeks refuge in a cave -- a cave with mystical properties as he soon finds himself transported to Mars, otherwise known as Barsoom. The variances in the Martian atmosphere gift Carter with a preternatural speed and strength. Carter's newly-discovered gifts allow him to survive among the Tharks, a nomadic, six-limbed tribe of fierce Martian warriors, winning him the hard-won respect of Tars Tarkas, one of the tribe's premiere chieftains. Carter gives little thought to his long-term future on Mars until the Tharks capture Dejah Thoris, the beloved Princess of Helium, one of the Red -- or humanoid -- Martians centers of power. In a life or death struggle to safeguard Dejah from the warlike Tharks and restore her to her people, Carter falls in love -- and in losing his heart finds a reason to fight for a future on this planet so different from his own.

I cannot remember the last time I indulged in the luxury of re-reading a book, so to read A Princess of Mars twice in four months? That's something special indeed. A Princess of Mars is my first experience with early 20th-century classic pulp fiction, and it has proven to be a memorable one indeed. Burroughs's first drafted John Carter's first adventure after a series of failed business ventures. The behind-the-scenes featurette on the recently released film, "100 Years in the Making," posits that John Carter was birthed out of an existential crisis in the author's life -- and taken as such it is fascinating to watch Carter's journey from outsider to Martian hero unfold. A Princess of Mars is in many respects the first space western, with the arid Martian climate standing in for the American west. If Mars is the western frontier, the various tribes of warlike Tharks are stereotyped Native Americans -- but what is fascinating is that Burroughs does not rest on stereotypical divisiveness. Carter moves from an attitude of superiority and frustration with his Thark captors to respect and admiration from their battle prowess and code of honor exhibited by warriors such as Tars Tarkas. This eventually helps birth an unprecedented alliance between the once sworn Green and Red Martian enemies, perhaps pointing to Burroughs' own belief in the inherent possibility of new beginnings symbolized by wild frontiers.

First published in 1912 in serial form, Princess is told wholly from John Carter's point-of-view. The first time I read the novel I was a bit put-off by the sheer amount of information "dumping," exacerbated by the fact that all of the action is related as Carter's reminiscences of his Martian adventures. For a good part of his time on Mars Carter is observing and learning, concealing the fact that he's learning the language and customs of the Tharks. This narrative style made the first third or so of the novel a bit of a slow-go on my first read-through -- but on my second, knowing what to expect, I couldn't put the book down. I relished Burroughs's imaginative world-building and richly-drawn characters. This is an intelligent adventure, articulately-told, with a cracking pace and a finely-honed sense of adventure and heart.

While the non-stop action and breath-taking fight sequences make this a page-turning read, by far my favorite aspect of the novel is romance -- perhaps something I relish all the more because, in a novel of this ilk, a romance this passionate seems unexpected. I'm a complete and total sucker for an old-fashioned romance, and Carter's character possesses an inherent nobility and chivalry that I just adored. And while Dejah isn't quite the warrior the film version introduces (at least not yet), her nobility, self-sacrificing spirit, and intelligence mark her as a ground-breaking character -- every inch the lady, strong-willed, and willing to fight for what she believes. I loved the way Burroughs's develops their relationship. He seems to relish in their cross-cultural misunderstandings, but doesn't shy away from ages-old male/female archetypal behavior that lends their budding romance humor and spark.

Princess is an old-fashioned adventure novel that becomes an increasing page-turner the more Burroughs lets us see Carter adapt to his new environment, gradually opening himself up to friendships and relationships with people whose appearance and customs are so different from his own at first blush. John Carter's first adventure on Mars is the rare type of novel that improves when revisited, giving me a deeper appreciation for Burroughs's work as a pioneer in the realm of science fiction and fantasy. A Princess of Mars is a ground-breaking, thoroughly entertaining adventure that holds up to this day -- a sterling example of Burroughs's imaginative prowess, a classic from the pen of a pulp fiction master. I adore this book. Bring on the sequels!

The cover of this edition of A Princess of Mars was painted by Kekai Kotaki, and while I love it I have to share the cover to the 1917 hardback edition by Frank E. Schoonover: 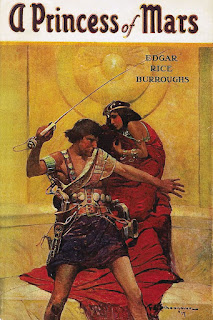 I love it. Here's another cover option, this time from the 1963 edition, by Bob Abbett: 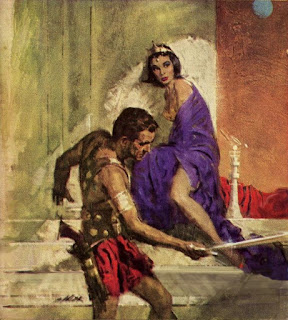 I do love this book too, and for the same reasons. :) I've been thinking about rereading it, too. I haven't read any of the sequels because I was afraid they wouldn't live up to the originals.

@Tasha - It is SO MUCH FUN. I'm so happy I finally discovered it. When you reference sequels do you mean the ones by Burroughs or other authors? I started Burroughs's The Gods of Mars last night -- picks up right where A Princess of Mars leaves off, and so far I'm really enjoying it. :)