Review: The Gods of Mars by Edgar Rice Burroughs 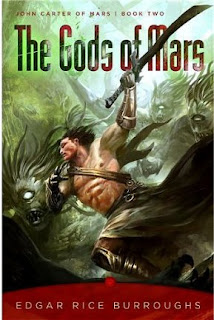 At the thrilling conclusion of A Princess of Mars, Captain John Carter of Virginia was racing against time to bring vitalizing air back to the dying planet of mars and save its inhabitants, including his betrothed, the beautiful Dejah Thoris, Princess of Helium, only to be returned to Earth against his will. Now, ten years later, Carter is finally back on Mars, searching for the princess he'll do anything to reunite with. First, Carter must team up with his Martian ally Tars Tarkas to battle fearsome enemies, including the terrifying Plant Men and the deadly Pirates of Barsoom. Embroiled anew in death-defying battles and intrigue, Carter learns more about the ancient theological, racial, and political divisions that have kept Mars in a state of war for centuries. But will he survive long enough to find himself back in the arms of the divine Dejah?

The Gods of Mars is the second book in the classic best-selling John Carter of Mars science-fantasy series. Written during the heyday of the pulp fiction era, these epic, swashbuckling Red Planet tales of derring-do and dazzling romance permanently remapped the terrain of fantasy and science fiction.

At the conclusion of A Princess of Mars, Edgar Rice Burroughs's first chronicle of John Carter's Martian adventures, readers were left in the thrall of an irresistable cliffhanger. With the future of all life on Barsoom at stake, John Carter risked everything to help repair the planet's failing atmosphere plant -- and in doing so found himself unceremoniously sent back to Earth. With the future of his wife, Dejah Thoris, and their unborn child far from secure, Carter spends the next decade waiting and hoping for a way back to his new homeland to learn their fate. When Carter's fondest wish is finally granted and he is returned to Barsoom, his simple desire to be reunited with his lost love is easier sad than done. Upon his return to Mars, Carter finds himself in the Valley Dor, the final destination of the voluntary pilgrimage all Martians take down the River Iss, from which they can never return, in order to fulfill the tenets of their faith. But the renowned valley is anything but a peaceful spiritual haven. And Carter discovers that in order rejoin his family he must overcome centuries of belief and a false religious power determined to maintain its stranglehold on the Red Planet.

When Burroughs first introduced his vision of Mars to readers, the landscape and peoples Carter encountered were a fairly straightforward translation of the tenets of the American western placed within the parameters of a new frontier. There are the nomadic Tharks and the various tribes of warlike red men populating the desolate Martian landscape. But when Burroughs returned Carter to Mars for a second set of adventures (first serialized in 1913), he took the opportunity to gloriously expand on the world he'd created, introducing new landscapes and peoples for Carter to encounter. En route to the Martian "paradise" Carter battles fearsome Plant Men who are joined by an old foe -- the vicious white apes. Those creatures are controlled by the Holy Therns, the pasty-skinned, bald gatekeepers of Issus worship, a cult of cannibals drunk on power, willing to do anything to maintain their faithful following. And finally there are the fearsome Black Pirates of Barsoom, the self-proclaimed First Born tribe whose hidden seat of power Carter vows to destroy in order to free Mars from the power-mad perpetuation of a false faith.

I find Burroughs's treatment of organized religion particularly fascinating here. I did some cursory online reading and it doesn't seem as as though Burroughs was anti-faith. Rather, that he was highly concerned with the potential for exploitation of the faithful stemming from any organized religion. As such, Carter's single-minded assault on centuries of faith is extraordinarily thorough, and sets up nicely endless possibilities for conflict to come in subsequent volumes of the series. Carter as a fighting man is the epitome of straightforward action and belief, and as such is perhaps the embodiment of Burroughs's ideal argument in favor of the virtues of the "everyman."

Unfortunately much of the old-fashioned romance found within A Princess of Mars is distinctly one-sided here as Dejah is off-screen for most of the novel. But the charm of Carter's inherent nobility and chivalry are perhaps only magnified by Dejah's absence as thoughts of her are never far from his heart (seriously, he could make me swoon). Thuvia, a Martian prisoner Carter frees from the Therns is the principle female presence in this story. And while she falls in love with Carter (as expected), even though he doesn't give her a second look (could he be more perfect?), she is as honorable and moral as Dejah in the previous book and refreshingly capable of assisting in her escape from the Thern captors. Burroughs's women may be idealized, but he gives readers a bit more than "just" a fainting damsel in distress than one might expect from classic pulp fiction.

Much like its predecessor, The Gods of Mars is a rollicking, fast-paced, old-fashioned adventure novel that is every bit as fun and entertaining -- perhaps even morseo -- than Carter's first Martian outing. This book is a page-turner of the first order that has deepened my appreciation of Burroughs's work as a science fiction pioneer and made me even more of a John Carter fangirl. Filled with characters I've grown to love, this is a world that I adore getting lost in, leaving me eager to dive into the next installment.

I couldn't resist sharing some classic cover options once again. This gem is by Frank E. Schoonover and is from the 1918 hardcover edition of The Gods of Mars: 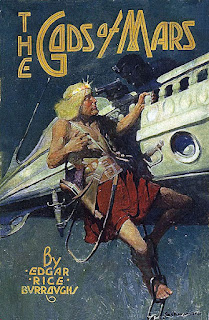 And this is a 1960s-era paperback cover (not sure about the artist?): 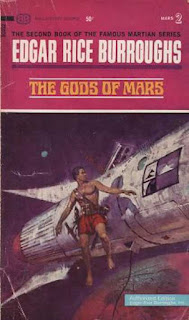 I so want to read these books but I don't have the time. :( Someday, someday....

@Elaine J. Dalton - They are SO worth it! (But get married first...just saw your latest blog post -- congrats!)