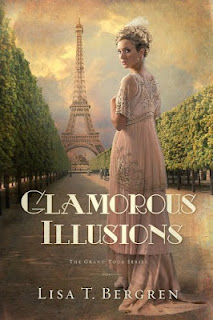 It's the summer of 1913, and Cora Kensington's life on the family farm has taken a dark turn. Not only are the crops failing, but someone dear to Cora is failing as well.

One fateful afternoon, a stranger comes to call, and Cora discovers a terrible secret abou ther past...a sercret that will radically change her future.

Cora is invited to take the "Grand Tour" of Europe, a trip intended to finish a person's education and solidify an understanding of refinement and ancient culture. As she travels from England to France with kin she's never known, Cora encounters the blessings of a family name, as well as the curses. But when an unbidden love begins to form, she realizes there are far greater challenges ahead...

The first book in the Grand Tour series will take you on a journey of cultural refinement -- but, moreover, on an inner journey of self-discovery.

Cora Diehl was always secure in her identity and faith. The only daughter of Montana farmers who eked out a grain-poor living from the copper-rich soil, Cora's parents sacrificed and saved to give her the chance to earn a teaching certificate. Cora's precious enrollment at Normal School was her golden ticket to a future unencumbered by the vagaries of a farming life, dependent on the whims of the weather. But the foundation of her world crumbles when her beloved father suffers a stroke and her parents stand in danger of losing the land into which they'd poured their lives for years. With her future hanging in the balance, the already fragile Cora sustains an even greater blow. The infamous copper baron Wallace Kensington appears, announcing biological father, and offering to make the Diehls' problems vanish -- for a price. He'll see to the physical and financial needs of Cora's parents if she'll agree to take the Grand Tour of Europe with her three half-siblings, and at the end of the summer if she so desires he'll provide the necessary tuition for her return to school. All he asks for is one brief summer -- a few months that promise to change everything. With Cora's very identity called into question, her greatest challenge may be in choosing between returning to the life she's always known or embracing the unthinkable -- the idea that the Tour, her newly-discovered family, might change the course of her life forever.

If there was ever a novel primed to capitalize on the fervor created by Downton Abbey, Glamorous Illusions is it. Bergren's opening volume in the Grand Tour series is a masterful exploration of a girl and her world on the cusp of earth-shattering change. For all the revelation of Cora's illegitmate birth rocks her world, that personal turmoil is but a small ripple in the stormy sea that threatens to engulf her newly-discovered world of wealth and privilege offered by the Tour. The summer of 1913 is very much the calm before the storm of world war that will engulf the glittering, overwhelming world that Cora is thrust into as the newest (and most scandalous) recognized member of the Kensington family. It is a masterstroke, setting Cora's very personal journey against the lush, decadent backdrop of a world of privilege  in its twilight. Doing so allows Bergren to emphasize in a very organic way the transient nature of earthly wealth versus the eternal riches of faith and character which Cora must embrace if she's to survive and thrive in her new reality.

Cora is one of the most appealing and likeable heroines I've encountered recently in fiction of this ilk. Intelligent, passionate, and articulate, she's every inch a "diamond in the rough." I loved her compassion, her honest battles with grief, anger, and fear, and the raw wonder with which she approaches the world she encounters so far removed from her farm roots. It's refreshing to see a character raised a believer  grapple with questions of faith and identity when the familiar and safe nest of childhood and home are stripped away -- in Cora's case quite literally. Faced with the choice of letting her past define her, or choosing who she wants to be in a world and circumstances not of her own making or choosing, Cora's personal journey is incredibly well-meted out, her personal struggles nicely woven into the fabric of the once-in-a-lifetime opportunity her newly-discovered father  has made possible.

Bergren populates Cora's world with a host of richly- drawn supporting players. I particularly love Will, the young tour guide-in-training and the quiet manner in which he shows his ever-growing (but oh-so-socially-inappropriate) regard for Cora. And Pierre, the unconventional nobleman? Oh my stars. Beween the two men Bergren has crafted the beginnings of a love triangle worthy of any Masterpiece production, and just as addictive.

The history of the Grand Tour is a fascinating one, and thanks to Bergren's meticulous research and richly evocative prose, the reader is swept into a fully-realized world now lost to time. Bergren's passion for history and travel shine in this novel, and through eager eyes of Cora and her travelling companions, Glamorous Illusions paints a vivid picture of the life-changing nature of their journey. Bergren has a wonderful knack for creating compelling characters that ring true to the time period. Her vivid characterizations and well-crafted plot mark Glamorous Illusions as the start of what promises to be an epic, unforgettable reading journey. This is a masterfully-executed, enthralling work of fiction from start to finish that will leave you eager for the next installment, and reluctant to bid even a temporary farewell to Cora's glittering world. A fantastic, addictive, compulsively-readable experience -- very, very well-done.
Posted by Unknown at 7:19 PM

One of the best books of this year.

I loved Will so so much! He was just so appropriate. Can't wait for the next book!