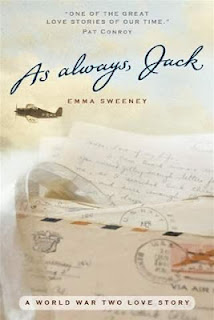 The discovery of a cache of letters -- written just after World War Two by a young pilot from Texas to the California girl with whom he had fallen in love -- becomes a grown daughter's touching introduction to the man who died before she was born, the father she never knew. Unique in its poignant details yet universal in its depiction of the passions and fears of wartime, As Always, Jack is a love story that sears the heart.

Four months after her father was lost in the waters south of Bermuda on what was supposed to have been a routine Navy flight, Emma Sweeney was born. By the time she was old enough to start wondering about the father she'd never known, Emma's mother had remarried. And with a reticence to revisit the past, perhaps characteristic of her mother's generation, information about her father was slow to come over the years, when at all. But following her mother's passing, Emma discovered her final gift -- a ribbon-tied packet of fragile letters through which she finally met the man that tragic plane crash, decades earlier, had forever robbed her of the chance to know in person. Through those letters she finally met Jack.

As Always, Jack, collects the letters Lt. Jack Sweeney wrote Beebe Mathewson over the course of a six-month deployment to Asia in 1946. Though they'd known each other a scant eleven days before he left California for points east, that was enough for Jack, who made no secret of his determination to win Beebe's heart. Funny, heartfelt, and poignant, Jack's letters are not only an introduction to a young man head-over-heels in love with the woman he'd determined to marry, but a window into the hopes and dreams, concerns and fears faced by those living in the uncertainties of the waning days of World War II.

This slim volume is beautifully designed, interspersing period reproductions of air mail stamps and Jack's humorous illustrations throughout the text. The latter, especially, are powerful reminders of the intensely personal nature of these letters, and what a precious gift it is to be invited to share in the heady early days of this timeless love story. As I met Emma's father, I was powerfully struck by what a rare gift it is for a child to gain such insight into their parents, to see them before they became firmly ensconced in a parental role, when life and love were still very new prospects. As such this book is an intensely personal gift, one that cannot fail tug the heartstrings, threaten tears, and leave the reader awash with a renewed sense of gratefulness for the sacrifices of the military and their families through the ages in the name of honor, duty, and patriotism. This book is an incredible gift, one I'll not soon forget.

"Just remember me once in a while -- not too often, or it'll cramp your style, you know -- and as long as I'm remembered, I'm not really dead. I'll still be living in John, and Bill, and Al, and Dan, bless their hearts. That's what they mean by eternity, I think." (from Jack's final letter, written days before his death in 1956)

Thanks to TLC Book Tours for the review opportunity!
Posted by Unknown at 9:25 AM

This sounds like an amazing book! Thank you for reviewing it! I am going to look for it.

I'm glad to know that the physical book is so beautifully made - that's always a bonus for me!

@Miss Jack Lewis Baillot - I loved this. :) Look for a giveaway here next week! :)

@heathertlc - Thanks again to TLC for the tour opportunity!

Wow. That quote at the end gave me chills. I can't imagine what it would be like to lose a husband at such a young age.

Hi there! I'm so glad you liked the book so much and were so moved by my story and my father's letters. I can't tell you how happy it makes me to know readers enjoy this book - I always knew my father had wanted to be a writer (my mother told me more than once that he wanted to retire and run a small newspaper) and helping him to achieve that goal has been an extremely gratifying experience for me. Thanks so much for helping me realize my dreams!

@trish - Oh those last few pages had me BAWLING! Thank you so much for emailing me about this tour opportunity, I would've hated to miss this gem of a book!

@Emma - Oh thank you SO much for stopping by! You've made your father's dream of being a writer come true in a wonderful, moving manner! Thank you for sharing your family with the world!