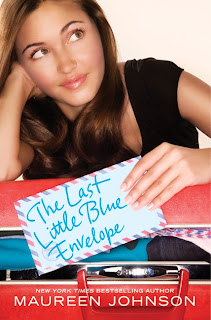 Ginny Blackstone spent last summer traveling around Europe, following the tasks her aunt laid out in a series of letters before she died. When someone stole Ginny's backpack—and the last little blue envelope inside—she resigned herself to never knowing how the adventure was supposed to end.

Now a mysterious boy has contacted Ginny from London, saying he's found her bag. Finally she can finish what she started. But instead of ending her journey, the last letter starts a whole new one, and Ginny must hold on to her wits . . . and her heart. This time, there are no instructions.

Last summer Ginny's Aunt Peg sent her on a whirlwind adventure to England and across Europe. Thanks to thirteen little blue envelopes containing letters with very specific instructions, Ginny followed her beloved, eccentric aunt's footsteps, along the way learning a lot about not only her aunt but the woman she wants to be on the cusp of graduation. But the adventure was cut short by the theft of the final letter, leaving Ginny with a frustrating mystery -- she learned so much about herself and her aunt the summer of the blue envelopes, but without closure, without knowing Peg's intended conclusion to her letter-driven adventures, Ginny is left struggling with the sense of a quest unfinished. And that unfinished adventure casts a shadow over Ginny's future, leaving her struggling with her post-high school plans. Then a mysterious English boy e-mails Ginny proof that he has the final letter, and he's willing to give it to her -- for a price. Unable to resist the siren call of adventure, the tantalizing chance to finish the journey she started months earlier, Ginny flies to England for Christmas, hoping to reconnect with the boy she met last summer and discover how her aunt planned to end the blue envelope adventures. But with the final letter held hostage by the enigmatic Oliver, Ginny soon discovers that this final adventure has no rules, and Aunt Peg's final gift may be the most precious of all -- testing her resilience and driving her to the realization that the chance of love is worth the risk of heartache.

While Johnson's 13 Little Blue Envelopes was a charming, escapist fantasy, a well-executed travelogue, but the characterization of Ginny left me flat. Compared to the descriptions of every place she visited and the colorful characters she encountered, she was just there, never really engaging in her experiences or with the reader until the end of the novel. Fortunately, Ginny's sequel rectifies those issues and delivers an adventures that improves in every respect on its predecessor. From the first pages Ginny was a character I could connect with and cheer for, someone I wanted to see succeed because Johnson finally gives us a window into Ginny's soul, laying bare what makes her character tick, her uncertainties and fears, her hopes and her dreams. Yes, there's still a bit of a plausibility issue when it comes to her AWOL parents, but Ginny's character was so well-drawn in this outing that I could accept instead the hodge-podge family (I love her Uncle Richard! He needs his own book!) of friends and acquaintances she develops thanks to her aunt's letters and accept the fact that she's a barely legal and essentially free agent traveling the world.

I loved how Johnson plays with the concepts of artistic "merit," the power of creativity, and most particularly how one responds to one of life's constants -- the change factor --  that can impact one's path, purpose, and passions. This is perhaps most starkly illustrated in Ginny's discovery that Keith, the boy she fell in love with over her magical summer, has moved on in her absence and acquired a new girlfriend. For much of the novel Ginny is left pining for Keith (and frankly he is a master at sending mixed signals), while determining to shut the enigmatic Oliver out of her life. Now I loved Keith in the first novel, so it was a little painful to see him act like a bit of a jerk, but Johnson develops the situation with heart-wrenching realism. The boy you first fall in love with is rarely the one you end up with, but that doesn't make the heartache any less -- and the introduction of the brooding, snappily-dressed, morally ambiguous Oliver is Johnson's entree to play with the idea of letting go of the good to get the better. As Peg advises Ginny in her final missive, "you can never visit the same place twice. Each time, it's a different story" -- and that coming-of-age wisdom is the heart of the novel, a powerful reminder of the power and pain in growing up, letting go, moving on, and allowing both joy and heartache, embracing life's messes and allowing them to enrich our life experience.

The Last Little Blue Envelope provides a more than satisfying conclusion to the questions left lingering at the end of Ginny's first adventure. Happily, Johnson leaves the door open for the possibility of a third outing to Ginny's world, while at the same time providing a wholly satisfying readng experience with this sequel. Filled with eye-popping delights for the armchair traveler, unexpected romantic sparks, and surprisingly poignant ruminations on the power of art, change, and a life well-lived, The Last Little Blue Envelope hits all the right notes -- a sterling example of a sequel that gets everything right.
Posted by Unknown at 1:40 PM