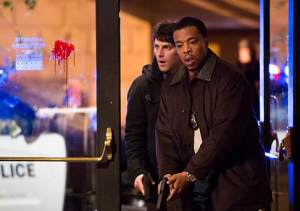 The penultimate episode of Grimm's first season is a largely Monroe-centric outing, highlighting the unavoidable reality that Nick's Grimm life is literally exploding at the seams, becoming harder and harder to contain from those closest to him not "gifted" with his unique sight. This episode opens with a documentary style setup, where a group of Bigfoot hunters/enthusiasts are in the woods following a lead on a sighting. When one lets loose with a "Bigfoot call," the forest explodes in violence as the group is viciously attacked by something or someone. Cut to local rancher who discovers something is attacking his horses. He scares it off with a shotgun blast and then calls Juliette (Bitsie Tulloch) in to tend to a horse with bizarre bite marks on its neck (also, horse is eerily calm all things considered -- ha!). But YAY for finally getting a chance to see Juliette DO HER JOB! Juliette and the rancher follow a trail of huge footprints and blood spatters into the woods where they discover the violently dismembered remains of the filmmakers. Visibly shaken she calls Nick (David Giuntoli), who shortly thereafter arrives with Hank (Russell Hornsby) to investigate. The wounds suggest an animal attack, but the human footprints suggest otherwise. The appearance of the lone survivor of the attack sets the record straight -- she hysterically claims Bigfoot is to blame.

Back at the station, the recorded footage from the Bigfoot hunters is retrieved, revealing glimpses of the attacker who appears to be wearing flannel. Renard (Sasha Roiz) is of course eager to keep potential Bigfoot murders out of the news (love how he is so matter-of-fact about everything). When Nick shares the video findings with Juliette, she's positive that a human couldn't have attacked those horses -- sort of  plays into the whole idea about how those who aren't Grimms or Wesen will figure out ways to deny the evidence of the fantastical, even when it is staring them right in the face, no?

Cut to Monroe (Silas Weir Mitchell), who apparently fell asleep reading The Decline and Fall of the Roman Empire, which makes me love him even MORE (who knew that was possible?), who wakes up when the Wesen-gone-wild shows up at his house. The guy full of crazy turns out to be Larry, a friend from Monroe's Wesen support group, whose Wesen identity is that of a Wildermann, i.e. Bigfoot (the catch being they are normally friendly, even-tempered loners). Larry's injuries leave him passed out on the couch, but even more troubling is the fact that he cannot fully transform back into his human state. So this raises an interesting dilemma for Nick when Monroe calls him over to help -- clearly Larry has done something horrible, but he can't arrest him in his current condition. And then there's Monroe's assistance that Larry's behavior is COMPLETELY outside the norm for a Wildermann. Talk about being caught between the proverbial rock and a hard place, yeesh! When the search dogs arrive, Monroe quickly decides to don Larry's shirt and transform into a Blutbad, leading them off the scent. Monroe freaking out the poor dogs is all kinds of funny, but things go south when Hank arrives on the scene a bit sooner than expected, and catches a glimpse of Monroe in wolf-form. YIKES.

The news that Hank has seen a Wesen completely freaks Nick out, because unless Hank chalks it up to allergy-eyes or something he is going to need a TON of therapy. :P But before he and Monroe can worry too much about that hot mess, Larry wakes up, pleading with the two of them to help him and get "it" out, apologizing for his actions. Larry is so distraught, so desperate he claws the back of his neck open, yanking out a drug-delivery device. He then promptly DIES IN MONROE'S kitchen, which I'm pretty sure is gonna put him off cooking (at least it would me, just sayin'!). In order to protect Monroe's involvement, he & Nick plant Larry's now-human form in the woods for the police to find, along with the device so it can be investigated officially. Monroe's reaction to his friend's violent end is terribly wrenching to see, especially since Larry had seemed so happy with the progress he'd been making with a Wesen psychiatrist. (His eulogy about everything having an ending, except a sausage which has two was pretty priceless!) 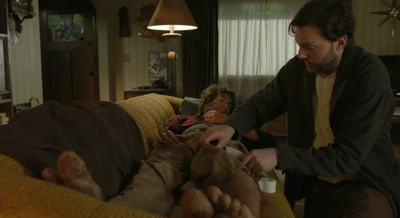 When I initially watched this episode, I assumed that the writers chose to explore the Bigfoot legends as a natural extension of the Wesen mythology rather than pulling from a particular story. But yours truly of little faith in the writers was proven wrong (SHOCKER! *wink*) when I discovered that the show also pulled from the Grimm story "Hans the Hedgehog." Basically the story concerns a young man who is half human, half hedgehog, easily relatable to Larry in this episode (and pretty freaky to imagine at any rate). The Hans story takes a disturbing turn when he rescues a king who promises him his daughter, tries to renege on said promise, and then Hans goes crazy and kidnaps daughter, returning her bleeding from spike wounds (SYMBOLISM ANYONE?). At least in Larry's case it is revealed that his violent state was a result of "Wesen suppression drugs" and not the the fact that he was pitching a fit, no? Apparently everything ends well for Hans as he can magically (all of a sudden and MOST conveniently) remove his hedgehog half on his official wedding night, and apparently all is forgiven, but poor Larry does not have such luck.

So with Larry's body the police are sure the case is closed, but of course NICK KNOWS BETTER so he goes to visit Larry's psychiatrist, Dr. Brinkerhoff (Roger Bart). First thing, a psychiatrist on a TV show like this named "Brinkerhoff" just sounds shady, and that's not even considering his freakish, creepily calm demeanor. The doctor admits to working on Larry's "impulse control" issues, but doesn't own to any drug therapy. It's fascinating to note that this late in the season the show is choosing to address the idea of Wesen dual-natures in such depth. Brinkerhoff leads the camp that would espouse denial of self, suppressing an essential and natural part of one's nature as the way to happiness -- even going so far as to suggest that Nick needs therapy to deal with his "Grimm side." I love seeing how Nick is, at this juncture, finally at a place where he's accepted his Grimm abilities, as Brinkerhoff's methods are a tragic example of going to extreme lengths to deny oneself -- instead of facing the issue head-on, denying it, suppressing it, only leads to explosive (literally) carnage.

When a second Bigfoot style attack occurs, and the perpetrator is killed, he's revealed to be a family man and lawyer with no violent history, but the same drug pump Larry had implanted in the back of his neck. Meanwhile, Juliette is testing hair samples she took from the scene of the first attack, where she's discovered that the DNA points to a "para-human" -- a human/animal hybrid -- but of course, that isn't possible, right? (Poor Jules...) The second attacker/drug victim was also a former member of Monroe's old therapy group, and a third recently committed suicide -- so my favorite Blutbad takes it upon himself to start asking questions about why his friends were pursuing "therapy" with Brinkerhoff (real question: why did no one else try Monroe's vegan/pilates method? I mean seriously...) Just when Nick learns that the drug pumps were shipped to Brinkerhoff (he ordered FOUR), we see that Monroe is visiting Brinkerhoff's office -- and the doctor is about to pull a Jekyll/Hyde since he is testing the drug suppression regimen on himself. Can I just stop for a second and say I LOVE LOVE LOVE Monroe's proactive investigating? The guy should give up on clock repair and look into becoming a licensed private eye, so his work with Nick can be official (when Nick and Hank arrive after Brinkerhoff transforms and runs off to wreak havoc on downtown Portland, one of the episodes funniest moments is Hank's comment of "what's he doing here?!" -- referring, of course, to Monroe...if only you knew Hank, if only you knew...ha!). 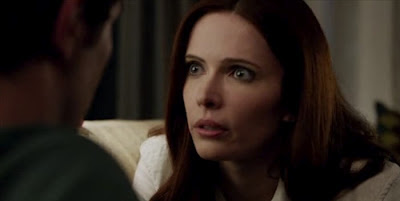 The Brinkerhoff chase was I think one of the show's more entertaining, as it culminated in a standoff in the rigging of a theater that reminded me of The Phantom of the Opera and King Kong by turns. Before getting shot and falling to his death, Brinkerhoff reveals that he meant well -- like that counts in the wake of this ep's body count! -- but a patient's true nature could not be controlled, and the effort was more disastrous (clearly) than the dual-life thing they had going on before. I think this type of tension in the Wesen community adds some interesting tension to the show, and it is a subject I hope they revisit in Season 2. Anyways, this whole manhunt mess ends with Brinkerhoff's death and Hank seeing his second Wesen in something like a week. His shell-shocked look does not bode well! The episode closes with Nick and Juliette watching a recap of the story on the news, where Brinkerhoff's appearance has been spun as a mask. Given the DNA evidence she's been studying, Juliette is riddled with doubt -- and in a really well-played moment she turns to Nick and shares her thoughts -- what if the stories aren't really stories? what if they're real? I love the fact that Juliette is 100% sincere in this question -- leaving Nick at a crossroads.

In some respects this episode felt like filler leading up to the season finale, but having seen it twice now I think it's a very solid outing for the show and I like the fact that it touches on the whole dual-identity theme and the problems that come with that in the Wesen world. AND the fact that it is very Monroe-centric doesn't hurt either. :)
Posted by Unknown at 3:20 PM

Good call on the Jekyll and Hyde connection--I hadn't thought about it, but the episode definitely had that vibe. Honestly I don't remember that much about it other than I thought Juliette doing research on the Wesen was a nice touch. Do you think if she tested Nick he'd have the same DNA as a Wesen?

@Tasha - It was the only thing I could think of when I typed this up. LOL!

Interesting idea bout Nick's DNA...I hope at some point we get some clarification on what sort of "vibes" Grimms give off that make them identifiable by Wesen creatures -- and if they ARE a type of Wesen. Interesting thought...