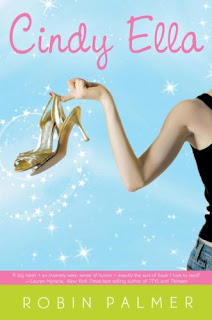 Prom fever has infected L.A. -- especially Cindy's two annoying stepsisters and her overly Botoxed stepmother. Cindy seems to be the only one immune to it all. But her anti-prom letter in the school newspaper does more to turn Cindy into Queen of the Freaks than to close the gap between the popular kids and the rest of the students. Everyone thinks she's committed social suicide, except for her two best friends -- the yoga goddess India and John Hughes-worshipping Malcolm -- and shockingly, the most popular senior at Castle Heights High and Cindy's crush, Adam Silver. But with a little bit of help from an unexpected source -- and the perfect pair of shoes -- Cindy realizes that she still has a chance at a happily ever after.


For most of her life, Cindy Ella Gold has managed to remain relatively invisible -- no small feat considering her name's unfortunate resemblance to a certain famous fairy tale princess. But all of that changes when the fifteen-year-old sophomore sends a letter to the editor of the Castle Heights High school newspaper, calling out the upcoming prom as superficial social construct designed to separate the haves (the popular kids) from the have nots (the unpopular kids). Cindy little realized the firestorm her letter would start, positioning her as a social pariah at her elite school, all but guaranteeing that her long-time crush, Adam Silver -- the "prince" of the school's social system -- would never look at her once, much less twice. But following the publication of her letter, Cindy finds herself torn between not one, not two, but three potential love interests. With the help of her best friends -- the peace-loving, yoga-obsessed India and the fashion-conscious Malcolm -- and an unexpected fairy godmother stand-in, Cindy learns the real magic that might help her win the boy of her dreams lies in just being true to her own unique, quirky self.

I have a life-long love affair with fairy tales, and the "fractured" type holds an endless appeal since I love seeing an author put a fresh and unique spin on a classic. I was thrilled to discover Robin Palmer's modernized reimaginings of fairy tales, beginning with Cindy Ella, very loosely based the Cinderella story. Like her fairy tale counterpart, Cindy Ella is the "outcast" in her blended family, but in a refreshing twist her home life, while not ideal, is free of the maliciousness that shades the traditional stepmother and stepsisters' actions. While Cindy's stepsisters, a.k.a. the Clones, Ashley and Britney certainly feel that Cindy's lack fashion sense and popularity reflect poorly on them, they are strictly comic characters and who don't go out of their way to sabotage Cindy's tenuous high school standing. And her stepmother Clarissa's penchant for relating everything to Lifetime movie plots is hilarious (particularly when one considers that Palmer once developed scripts for the network). While they may not understand her, it's refreshing to see a Cinderella's family situation that isn't riddled with complete soul-crushing dysfunction.

For a character who spends much of the novel bemoaning her peers' obsession with material things, Cindy can be equally flighty when it comes to her love interests. But that is part of the fun of this frothy confection of a novel. Much like the 2004 film A Cinderella Story (with which this novel shares more than a passing resemblance, particularly in the IM-relationship respect), Palmer's first foray into fairy-tale inspired fiction is a frothy slice of dreamy escapism. While Cindy grapples with her image and sense of self, her dialogue and thought-processes, occasional as flighty as the her stepsisters, are quite genuine for a teenage voice. And the payoff for remaining true to herself and her ideals (following a glittering makeover by her gay fashion-savvy SAT tutor), though arguably predictable, is a wish-fulfillment at its finest, a sweetly realized dream come true that revels in Cindy's individuality (and seriously, any guy who puts up with an infant younger-brother tag-along on the first date is a PRINCE). Cindy Ella is a light-weight slice of escapism for the fairy tale aficionado, and shows Palmer's promise for updating fairy tales in fun, unique, and modern settings. I'll definitely check out more of her work!
Posted by Unknown at 9:08 AM

Oh my gosh! This sounds so cute - love that Hilary Duff flick. =)

I really thought I had read this book (and my goodreads account says I did) but I honestly can't remember much which suggests that this wasn't a standout variation on the Cinderella story for me. Still I know I like Palmer's writing and have enjoyed other books by her and I hope you do when you check out more of her writing.

@Bookworm1858 - I wouldn't say this is a standout version either, more like cute. ;) I definitely plan on reading some of her other fairy tale variations!