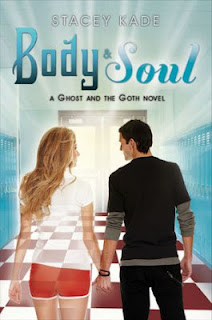 Alona Dare has been living as Lily “Ally” Turner for over a month...and it's not been easy. Besides being trapped in a body so not as good as her original one, she's failing miserably at playing the sister and daughter of people she barely knows. Plus, she can't help but think that Will Killian - the boy she hates to care about - somehow wishes the real Lily were back.

She and Will have been trying to find a solution, looking for a two-for-one miracle that would free Alona and keep Lily alive. Visits to local psychics have proven useless, but then they stumble across Malachi the Magnificent, who seems to be different. His office is full of ghosts, for one thing. But Malachi doesn’t seem to hear or see them, which is odd. Plus, he bolts the moment he sees Will. To make things even weirder, Misty Evans, Alona's former best friend, is waiting in Malachi's lobby and claiming that she's being haunted. By Alona.

Will's convinced that Malachi has answers, while Alona is all kinds of pissed that someone's impersonating her. But their efforts to uncover the truth will bring them much unwanted attention and put them directly in the path of a ghost who will stop at nothing for another stab at life. Even if it means destroying Alona.

A little over a month has passed since Alona Dare and Will Killian found themselves involved in a life-or-death confrontation with "the Order," the super secret organization Will's father had been a member of, that seeks to regulate and control ghost and human interaction. Alona made a split-second decision that changes everything -- in order to save Lily Turner, Will's former best friend, she "inhabits" Lily's comatose shell of a body. Her action has unexpected repercussions, not the least of which is how, for all intents and purposes, she is permanently stuck in a body far from her previous ideal with a new ready-made family she knows absolutely nothing about. For his part, Will has trouble coping with the new "Alona-ified" version of Lily -- having the former high school "It Girl" firmly ensconced in the all-to-real body of his former best friend is a twisty new reality he's ill-prepared to cope with, especially guilt over his not-so-secret attraction to Lily 2.0. In their quest to undo Alona's unprecedented body-snatching accident, the ever-bickering but committed pair run afoul of a ghost who will do anything to achieve a second chance at life. But in the battle to free Alona and save Lily's body from a hostile takeover, will Will and Alona lose their best shot at the happily-ever-after neither saw coming, but now both can't imagine living without?

I absolutely adored Kade's introduction to Will and Alona's adventures in The Ghost and the Goth -- it's a breezy, fast-paced read chock-full of banter in the spirit of Shakespeare's Beatrice and Benedick and simmering romantic tension. While I wasn't quite as crazy about its sequel, Queen of the Dead, or as interested in Kade's world-building of a larger ghost-talking Order with questionable containment practices, Queen nicely sets up the possibility that Alona and Will could have an actual relationship in this world. So it was with eager antcipation that I downloaded Body & Soul the day it released -- and oh my WORD, I'm happy to report that Kade does not disappoint. The final installment in the Ghost and the Goth trilogy places the focus squarely on the always-volatile, simmering will-they-or-won't-they Will and Alona relationship. Kade has crafted the romance on a slow burn from the start -- first there was their societal complications, Alona the queen of the popular crowd while Will was the definition of a loner. And then, when they finally reach a point where they can look past their preconceived ideas about each other, they run headlong into the not-so-small issue of Alona's status as Will's self-proclaimed spirit guide. This has never been a romance that could be rushed, but between Kade's mastery of teenage angst, snarky sense of humor, and apparent love of verbal sparring matches, the always sparkling, fiery, against-the-odds relationship is what makes this such an enjoyable series.

Body & Soul is candy-coated escapism at its best, but couched within Kade's wickedly funny, swoon-worthy romance is a surprisingly touching examination of family and identity. You don't expect great character studies in novels of this ilk, so its all the more surprising and enjoyable to see the carefully-meted out character growth Kade has developed over the past two novels come to fruition in the series conclusion. Alona, in particular, has undergone a steep learning curve that reaches its culmination once she unintentionally appropriate's Lily's body. For the first time in her life she's part of a family that cares about her, and in turn she begins to consider the implications of her actions and attitudes on those she encounters. It is particularly fascinating to watch Alona grapple with this second chance at life, forced to decide if she can make a new life for herself as Ally, taking the best parts of herself forward while laying the pain of the past to rest. Will, for his part, must overcome his lingering prejudice against Alona's popular origins and come to terms with the transformation she works in the shell of his former best friend -- an attraction that says more about how much he's fought his attraction for Alona's spirit versus any given physical form. Though they may spar and bicker, the heart of this series is what happens when two seemingly incompatible individuals discover the unlikeliest of friendships brings out the best in each of them.

Body & Soul is a thoroughly satisfying, fast-paced conclusion to a sparkling, unexpectedly entertaining series. Between Kade's ability to pen dizzying banter, develop a sizzling romance, and a standout, swoon-worthy hero, she's marked herself as a unique voice to watch in the YA market. I eagerly await her next book!
Posted by Unknown at 5:11 PM

This has been released already??? I really need to keep better track of these things.

I love this review! I think maybe I should just skip book 2 and go straight to this one. :)

I can't wait to read it! I love Alona and Will and really hope they get their HEA! :-D

@Jennifer - Oh you will love it! Thanks for stopping by & commenting!