Friends, I am absolutely thrilled to welcome Laurel Ann from Austenprose to the blog today with a guest film review as part of my All Things Jane celebration! Austenprose is one of the premiere destinations in the blogosphere for all things Jane Austen related. Laurel Ann features a plethora of Austen-related book reviews (new editions of her novels, as well as the sequels they've inspired), film and miniseries reviews, Masterpiece discussions!

This year, Austenprose is playing host to two fabulous reading challenges (which I'm woefully behind on - need to work on that!) - The Sense and Sensibility Bicentenary Challenge 2011 and the Being a Jane Austen Mystery Reading Challenge 2011.

On October 11th, Laurel Ann's first book, Jane Austen Made Me Do It, a collection of short stories edited by the Austenprose webmistress, will release - and you can count on seeing it featured here. :) 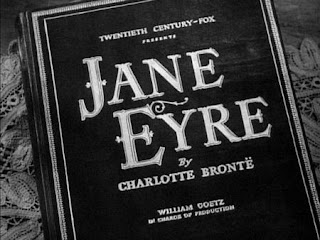 Tagline: A Love Story Every Woman would Die a Thousand Deaths to Live!

There has been so much discussed and written about the 1944 movie adaptation of Charlotte Bronte’s classic novel, Jane Eyre. Masterpiece, monumental and engrossing are some of the generous praise thrown at its feet. I confess to being one of its loyal admirers having been charmed at a very young age. It remained my all-time favorite movie for many years. Now, looking back at it with a more critical eye, and with many new adaptations to compare it to, it still remains my favorite movie adaptation of the novel so far. I am not a professional film critic, but I can share my reasons why this film moves me to tears even after many viewings, and many years. 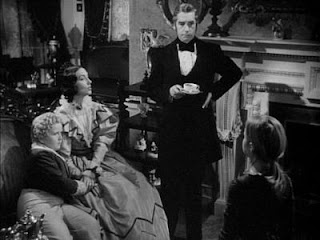 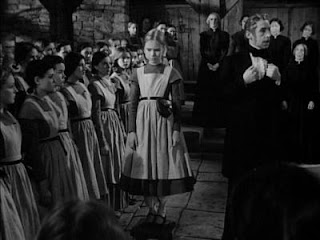 Jane Eyre is by far the most popular of Charlotte Bronte’s books, and quite possibly the most well-known of any Victorian novel. Only Charles Dickens' David Copperfield may rival her tale in popularity and readership. Set in the bleak, harsh moors of North England, the story is so familiar that I fear I will repeat myself here if elaborate on it too freely, so here is a very brief synopsis: Jane Eyre, a plain and outspoken young orphan girl is thrown over by her wealthy aunt and sent to a harsh and loveless girl’s institution where she barely survives and manages to eek out an education. 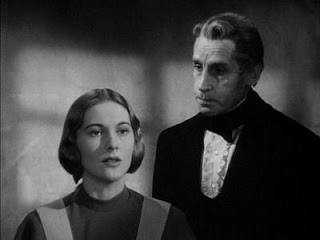 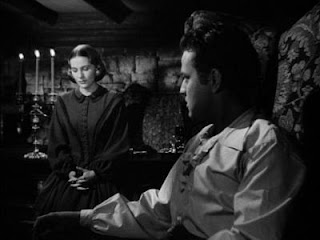 Leaving at age 18, Jane becomes a governess to the French ward of Mr. Rochester of Thornfield Hall in Yorkshire. It is also a cold, mysterious environment until Jane’s constancy and spunk warm the heart of its deeply troubled master Edward Rochester. There are dark secrets lurking in the Hall, including a strange woman named Grace Pool who lives in the attic. Jane and Rochester’s friendship earns her trust and respect and she falls in love with him. Rumors that he will marry a beautiful society debutant forces Jane to face the fact of their social differences are a barrier to his love. She cannot stay and witness him paying his attentions to his new wife and tells him she must leave. He reveals his love and proposes. She accepts. At their wedding ceremony a stranger declares an impediment. Rochester drags his bride and the party back to Thornfield and up into the attic to expose the dark secret which will tear Jane and Rochester apart. 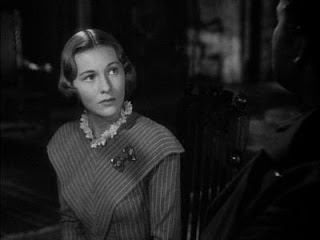 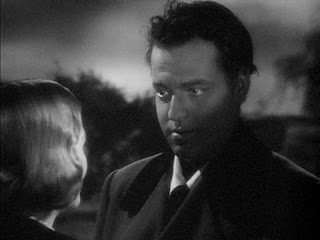 Each of the characters was brilliantly cast, drawn from the golden age of the Hollywood studio system at 20th Century Fox. Orson Welles’ intense, tormented Rochester brooded and boomed the requisite angst and emotion in the most eloquent of baritone tones. Rochester’s voice is so important, and that is where many of the later versions have failed. They whine and simper when they should not. My one puzzlement was with his dark makeup which almost made him look like the Moor of Othello, which he would later portray on film in 1952. You notice the stark contrast in his complexion in scenes with the fair, bewildered Jane Eyre played with delicate vulnerability and strident resolve by Joan Fontaine. This may be all for emotional affect – the dark and light – the bad and the good – contrasting their personalities as opposites, but found it one step over-the-top. 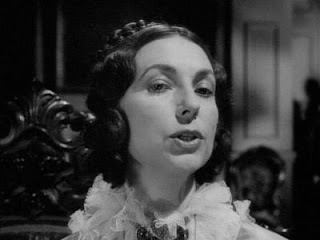 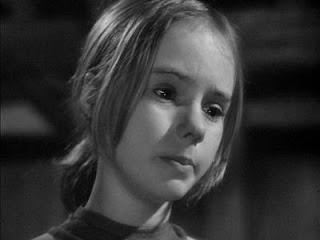 The secondary characters support the story beautifully. There are so many that I will only mention my three favorites: Agnes Moorehead as Mrs. Reed has a very minor role, but she just oozes indolence and arrogance like no other actress of this era. The young actresses in this movie really shine. Peggy Ann Garner as the young Jane is outstanding, relaying the spirit and puzzlement of her situation and Margaret O’Brien as Rochester’s French ward Adele steals every scene. Watch her eyes flash and facial expressions when Rochester returns home to Thornfield with gifts of the dancing dress and slippers. Amazing for one so young. I would be remiss if I did not mention the luminescent violet eyed Elizabeth Taylor as the doomed Helen, Jane’s only friend at Lowood School. It is one of her early roles and she just glows with early stardom. 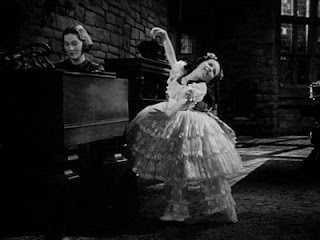 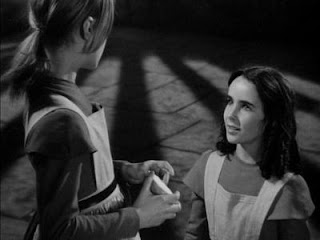 Jane Eyre is a gothic tale, yet few movies relay this fact as affectively as this black and white masterpiece. The use chiaroscuro, deep, long shadows and stark light, used to perfection by painters of the Renaissance, adds an eerie presence of mystery and tension to the scenes. The sweeping and dramatic music score by Bernard Herman, who also scored Citizen Kane and The Ghost and Mrs. Muir, enhances the drama at important moments. The startling garden scene where Rochester proposes to Jane with the wind howls and lightning striking a tree is all tingly terror and happiness all at once thanks to the music. The direction by the venerable Robert Stevenson was overshadowed by Orson Welles’ heavy hand and input behind the camera. Even though Stevenson is given full directing credit, so much of Welles’ unique filmatic style in imprinted in this movie that it must have been a difficult collaboration. The costuming is interesting. Jane wears only about two different demure frocks, and the gown for the elegant gold-digger Blanch Ingram (Hillary Brooke) who is trying to snag the rich Rochester, is as gaudy and flashy as her personality. Visually, this movie is all about contrasts of personalities, settings and emotions. 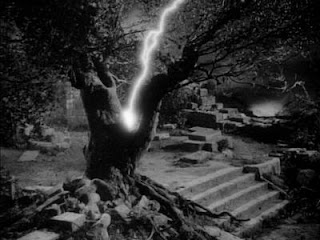 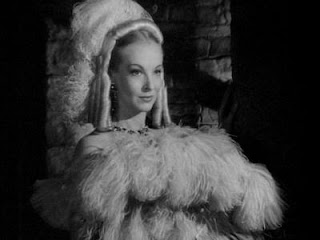 So why does the 1944 Jane Eyre remain my favorite movie version of Bronte’s classic story? Besides the amazing cast, superb art direction, sweeping music and the perceptive direction – the script adapted from Bronte’s novel by John Housman, Aldous Huxley and Robert Stevenson – though truncated and not strictly faithful to Bronte’s narrative, stands out as the most tragic, romantic and emotionally wrenching of any of the seven versions I have seen so far, including the new theatrical movie released in March staring Mia Wasikowska and Michael Fassbender. I am still strongly convinced that this tale can only be told as a Gothic one, filmed in black and white, and should supply us with two tormented characters who overcome social barriers, a tragic past and emotional upheaval to find the love that they were destined to deserve. 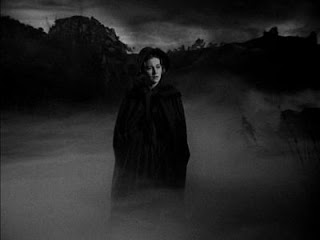 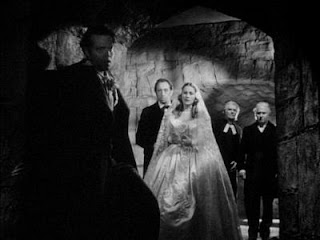 Laurel Ann, thank you again for your interest and generosity in contributing a guest post for All Things Jane. Thanks to your thoughtful commentary and wonderful screen captures, I'm inspired to revisit this film version of Jane Eyre - it's been FAR too long since I've seen it.

To those you have seen this film version, I'd love to hear your thoughts! And to anyone who hasn't, I dearly hope that this review has piqued your interest as it has mine. :)

Interesting review! Despite having read the book (and known about the story for ever), I've never seen an adaptation. I've *almost* seen the Ruth Wilson/Toby Stephens one - as in held it in my hand at the library and then decided that my stack was big enough all ready :-) - but that's about it. Which version would you recommend?

I love this adaptation, and it's actually the only Jane Eyre movie I've seen so far. So I have nothing to compare it to except the book. I agree that the casting is incredible!

@Alexandra - Thanks so much for stopping by! I love Laurel Ann's reviews. :) I haven't seen this movie in (too many) years, but based on Laurel Ann's review alone I'd recommend it. My personal favorite is the Ruth Wilson/Toby Stephens version (hoping to post a review soon on the blog!) followed by the latest theatrical version. :)

@Kristin - Thanks for stopping by! Great to have another fan of this version echoing LA's high praise. :)

It's been a long time since I've seen this version, but I remember enjoying it. Orson Welles was a good Rochester--I agree that Rochester's voice is so important--he "booms". Timothy Dalton's voice booms. In the most recent Jane, Fassbender doesn't boom but I really enjoyed him anyway. I'm not a purist, I appreciate others' visions of what the book is/could be. Can't wait to rewatch this version, to get the Fassbender version on DVD, and read more on this blog about Jane!!
Jeannie

@Jeanne - LOL, I agree, Fassbender doesn't "boom" at all! But I loved him. :) I still need to rewatch this version - the opportunity just hasn't presented itself yet. *sigh* Thanks so much for stopping back by!

Oooh, I can't believe I haven't seen this film since I absolutely love the old black and white time period movies. I'm reading Jane Eyre right now, so I better speed up my pace, lol.

@Svea - Oh you're in for a treat, you should definitely check this version out!