Today I'm thrilled to welcome my friend Deborah from Books, Movies, and Chinese Food with a guest book review! I feel like I've known Deborah for ages (we "met" back when I blogged on that "other" site), and she's one of the sweetest, funniest, most prolific book bloggers out there (loves books and Star Wars and Harry Potter = instant friend! :)) - so if you've never visited her blog, what are you waiting for? Deborah originally reviewed Jillian Dare by Melanie M. Jeshke back in 2009, and she graciously agreed to let me share her review of this modern-day take on Jane Eyre here as part of All Things Jane. Without further ado, please welcome Deborah with her review: 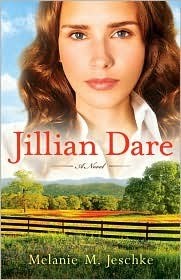 Jillian Dare leaves her Shenandoah Valley foster home behind and strikes out on her own as a nanny at a large country estate in northern Virginia. She is delighted with the beauty of her new home, the affection of her young charge Cadence Remington, and the opportunity for frequent travel to the Remington castle in England. She is less certain about her feelings for her handsome but moody employer, Ethan. In spite of herself, Jillian realizes she is falling for her boss. But how can a humble girl ever hope to win a wealthy man of the world? And what dark secrets from the past is he hiding?

I will admit that I have not actually read the original version of Jane Eyre. I have however watched several movie versions, including my favorite starring Timothy Dalton as Rochester. Therefore I remember the original storyline even if parts might be a bit fuzzy. This tale is a modern updated version of Jane Eyre. In place of Jane, we have Jillian a 20 year old nanny who has been hired to take care of the daughter of Ethan Remington, a famous movie producer. Jillian is a very humble character who takes delight in her job and her new way of living while at the same time starting to feel affection for her employer. I really liked the scenes that took place in England. I love the castle and enjoyed exploring it with Jillian. I could almost see myself there and would have loved to have spent more time in that setting.

The scenes in Virginia were exciting too but that was mainly due to the fact that I live in the same area as the story. It's always nice to read books that take place in my area and I can identify the places and locations. However, one quick qualm that a member of my book club pointed out: Jillian and her entourage go out to Tyson's Corner to go shopping. Where they live though, Tyson's would be extremely far and out of the way to go, and really wouldn't be the best place to shop. At the most, it would be an all day event and not the quick trip taken in the book. I liked Jillian's character. She just came across as very down to earth to me. She's not meek like Jane's character was yet she's not brash or outspoken. She was portrayed very well and I felt her character to be good for the story.

I felt that there were several conflicting issues throughout the book though. I felt that Ethan acted way older than his actual age. The explanation might be because he's British, but my argument would be that Jude Law is mentioned in this book and is the exact same age as Ethan. Jude is also British but he doesn't act stuff or old fashioned like Ethan does. I mean the way Ethan would talk sometimes just made me picture a 50 year old man. At the end scene at the hospital, the dialogue between Ethan and Jillian had me cringing because at how dated the conversation sounded. I also did not like John's character at all. After talking with other members of my book club, we discussed how his character vs. St. John in Jane Eyre acted totally different. John represents the stereotypical, preachy, condescending Christian that I hate reading about. Everything he did just got on my nerves. Also the fact that he wanted to marry his foster sister (warning bells!) but doesn't love her pretty much goes against everything he's supposed to believe in. I guess I was just really confused as to why John's Christianity comes off so strong because the rest of the story is meek and mild compared to him. While Jillian is a Christian, she doesn't feel the need to preach at everyone she comes in contact with. Therefore John seems to be a bad guy who wants it to be his way or no way at all.

Overall, while I enjoyed the story, I guess I just realize I'm not really a fan of modern adaptations. For this book, it comes from the fact that the characters acknowledge Jane Austen but either Bronte's story doesn't appear to exist or the characters just don't see that their lives are exactly parallel to Jane Eyre. I think the story best stands by itself and not as a modern adaptation. It does make for an interesting read and I look forward to going back and reading Melanie's previous books.

Deborah, thanks again for participating in All Things Jane! To be honest, I'd completely forgotten about this modern retelling until your email - has anyone else out there read this one? I'd be curious to hear more perspectives on how this stacks up against the original.
Posted by Unknown at 1:29 PM

I haven't read this one though I've had my eye on it and know it's a Revell book. Intersting about the JE connection as I'd not realized that. I always wonder why nyone would try a retelling of that novel because it is such a classic and few writers can pull it off! Since I love Virginia and my family is originally from there, it sounds so appealing. Deborah does a great job of whetting the appetite to read it;) Thanks to you, Ruth, for hosting book reviewers! Your blog adds a lot of spice:)

Sigh... Excuse my typos this morning. Can you tell it's early here west coast time?!

... *goes to dutifully order the book* Thanks for posting about it! :)

@Laura - Hello friend! :) Thanks for stopping by, and I'm glad you enjoyed reading Deborah's review too!

And you NEVER have to worry about typos around here...I can get pretty bad with those myself. ;)