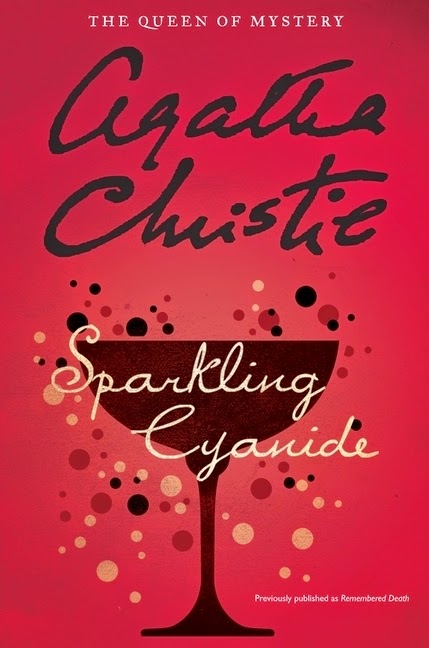 One year ago, everything changed for a seemingly close-knit group of friends and family -- for it was one year ago that one of them died. Seven went to dinner in a celebratory mood, and only six returned, for the seventh -- sparkling, effervescent, attractive Rosemary Barton -- drank champagne laced with cyanide. Rosemary was a golden girl, with everything to live for, and her suicide shocked the circle of survivors, for although suicide emotionally out of the question as a viable option for the inexplicable, horrific events of the evening, it was the verdict. For who would want to kill Rosemary? It must have been the depression she'd suffered as a result of a particularly nasty bout of flu. As horrible and tragic as it was, depression was the only option, the only way to bring order and reason from chaos. The only other option was even more unthinkable...that one individual who walked away from that fateful dinner was a killer...

As the anniversary of Rosemary's death approaches, the six other attendees begin to reminisce about their respective relationships with Rosemary...for as time has distanced them from the immediacy of her passing, so too has it dulled their comfort level with the suicide verdict, giving rise to uncomfortable questions. George, the long-suffering, dully respectable husband, has his doubts fanned by anonymous letters claiming Rosemary was murdered. Iris has begun to fear that she never truly knew her sister at all, while the mysterious Anthony bitterly regrets his onetime flirtation with Rosemary for jeopardizing his secrets and his hope of a relationship with her sister. Stephen, an up-and-coming politician, fears his long-time liaison with Rosemary may have jeopardized his career and his marriage, all the while wondering if his wife Sandra might have taken drastic steps to eliminate her rival. And last but not least, the quietly efficient Ruth, George's secretary, begins to ponder just how much she hates her employer's late wife. All connected, all harboring secrets...but only one with enough vitriol to kill Rosemary...and the ripple effect of that rash action threatens to strike again as the anniversary and the questions it raises inches ever closer...

When I first started reading Agatha Christie years ago, I almost exclusively confined myself to the Poirot mysteries, having fallen in love with the mustachioed, fastidious detective in no small part thanks to David Suchet's portrayal in the long-running television series. Thankfully, as the years passed I learned to broaden my reading horizons and discovered the gems that lay waiting in the other corners of Christie's extensive backlist. Sparkling Cyanide has long been high on my list of Christie standalones to read, especially since it is based on one of my favorite Poirot short stories: "The Yellow Iris." (The episode is one of my favorites among the television series' hour-long adaptations.) And when I finally tracked down a copy of the elusive 1983 film version, starring my much-loved Anthony Andrews and transplanting the story to Los Angeles (!!), I knew that at long last I had to read the source material.

There is something irresistibly compelling about a dinner table set mystery. Similar to a locked room tale, the dinner setting (also employed by Christie in Lord Edgeware Dies) immediately limits the pool of potential suspects. There is something extraordinarily creepy about the thought of sitting at table with a killer. The very idea of taking a meal with someone (typically) implies a certain conviviality, one Christie happily turns on its head by taking her limited guest list and making them question everything they thought they knew about each other.

As the novel opens, Rosemary Barton has been dead nearly a year, the approaching anniversary leading her family and friends reminisce about their acquaintance with Rosemary. It becomes quickly apparent that no one knew Rosemary as well as they'd thought...nor any other member of the group that witnessed her shocking death. I loved how Christie structured the novel, beginning with chapters told from each survivor's viewpoint, building tension as the mystery of Rosemary's relationships with each and her true state of mind at the time of the fateful dinner gradually click into place. At the one-third mark, Christie brings the story into the present, building towards the anniversary and the ramifications of George's insistence that his wife didn't commit suicide as widely assumed, leading him to plan a second -- and equally fateful -- dinner party.

The multiple viewpoints utilized aren't the neatest method I've ever seen Christie use for a mystery of this ilk, but the characters are engaging and I loved watching the secrets of their relationships and views of each other unfold in all their scandalous glory. This novel marks the final appearance of Colonel Race (also seen in The Man in the Brown Suit and as Poirot's friend in Cards on the Table and Death on the Nile), who, while never a star investigator, ably plays the assistant role, facilitating the investigation and here the dashing Anthony's creative breakthrough in recognizing the murder method.

Each and every main player in the cast is deliciously over-the-top in the best soap opera fashion (with the exception of Colonel Race), and though Sparkling Cyanide may not be Christie's most tightly-plotted mystery, in spite of -- or perhaps because of -- it's eccentricities it is one of her most delightful. This book was sheer, unadulterated fun to read from start to finish. This mystery is all about relationships, running the gamut from love to loathing and everything in between, replete with Christie's signature droll sense of humor and a dash of romance between Iris and Anthony. I would love to see this tale get a proper film adaptation, playing up the period elements and keeping the characters true to their time period and scripted histories. This is pure, delicious soap opera as only the Queen of Crime can deliver, a diverting breath of fresh air for mystery lovers looking for something a little different from a favorite author.

Agatha Christie's genius for detective fiction is unparalleled. Her worldwide popularity is phenomenal, her characters engaging, her plots spellbinding. No one knows the human heart - or the dark passions that can stop it - better than Agatha Christie. She is truly the one and only Queen of Crime.

"Rosemary that's for remembrance" Six people are thinking about beautiful Rosemary Barton, who died nearly a year before. There's the loving sister, the long-suffering husband, the devoted secretary, the lovers, and the betrayed wife. None of them can forget Rosemary But did one of them murder her?
Posted by Unknown at 8:29 AM

Saw the 1983 film (of course ;)) and while it has enough 80's cheese to make nachos with, it left me really wanting to read the original. It didn't disappoint! I *love* this story, it's definitely one of my favorite standalone Christies.

@Alexandra - That movie is so random!! I enjoyed it well enough but 1980s LA?! At least it served as our impetus to read the original. :)