Review: The Unveiling by Tamara Leigh 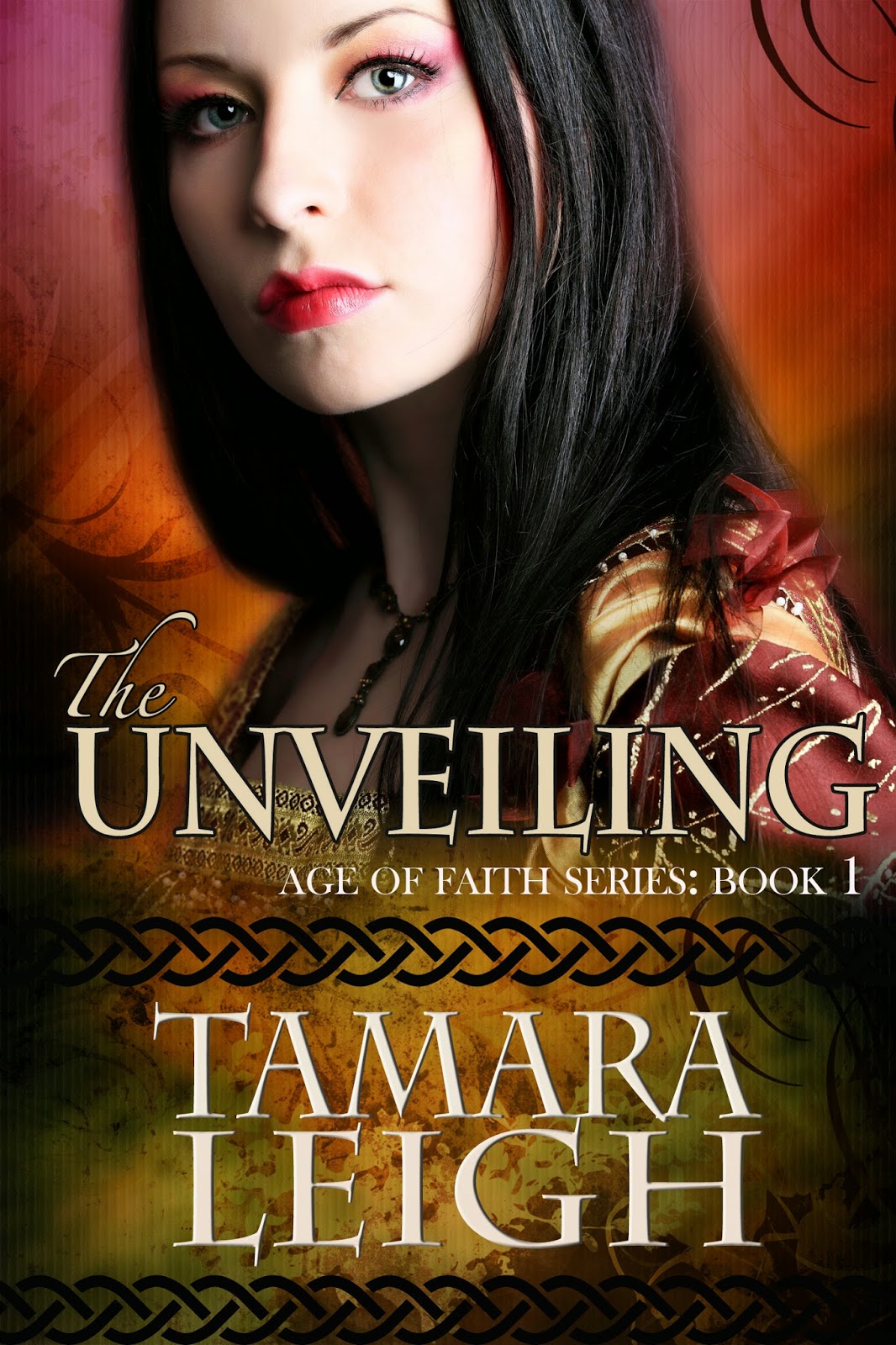 Amid the political turmoil of 12th century England, where the conflict between King Stephen the usurper and Henry, the rightful heir and son of the Empress Matilda, pitted friends, neighbors, and family members against each other, Lady Annyn Bretanne has but one desire -- to forge her own destiny in a world of men. More comfortable with a sword in her hand than embroidery -- or some other, equally ladylike pursuit -- Annyn has taken advantage of her indulgent uncle's care to become more a knight than the lady of Aillil as is her birthright. But her world is rocked when her brother Jonas, training as a squire at under the formidable and legendary Baron Wulfrith, is returned home by his master, ostensibly killed thanks to the civil war dividing the land. But Annyn discovers a secret meant to stay hidden forever as she mourns over her beloved brother's body -- the rope burns around his neck, proving that foul play, and not honorable combat, were the cause of his death. Sure that Wulfrith is responsible, the fourteen-year-old Annyn vows to dedicate her life to avenging her brother, shunning her sex and devoting herself to swordplay and weapons training, waiting for the moment when she can claim the revenge God has denied her family. Disguising herself as a squire-in-training, the boyish Annyn gains admittance to the hallowed male-only halls of Wulfen Castle, where boys become men and she will at last revenge her brother's death on its infamous lord. When Wulfrith turns out to be less the villain than she assumed, she begins to question her plan -- but with Henry descending on the castle and her future in the balance, her second thoughts may have come too late too late, setting in motion a fate she never dreamed possible.

Having read and enjoyed Tamara Leigh's first foray into self-publishing, Dreamspell -- a genre-bending medieval time-travel romance -- I was eager to try her recently-released medieval romances. While there is much to enjoy within the pages of The Unveiling, I didn't love it quite as much as I'd hoped to, mainly because it plays to a trope that can be very hit-or-miss with me -- the woman assuming the guise of a man for revenge, adventure, whatever the case may be. Let me be clear -- I am not nor have ever been a "girly-girl" in the strictest imagining of that term -- I am all for women eschewing traditional roles and following their dreams and doing what they love, no matter tradition or societal expectations. That said, there are incontrovertible differences between the sexes. But in historical fiction, if a woman is going to deny her sex, deny her expected place in society, I have to 1) buy into why she's doing it and 2) believe that she's capable of stretching those boundaries so I can respect her choices.

On that score, I never bought Annyn's justification for seeking revenge on Wulfrith, or the fact that she was good enough at the "manly" pursuits of swordplay, etc., to pass as a squire-in-training. While it is clear her brother was murdered, she just decides that Wulfrith is responsible with only the slimmest circumstantial evidence to support her claim. And then, when she manages to successfully insert herself at Wulfrith's castle in order to facilitate her assassination attempt, she complains about everything she's required to do in the guise of a squire. Seriously?! I could respect her so much more if her overweening hubris hadn't prevented her from admitting that she wasn't and never would be as good as battle-hardened men a foot taller, twice her size, and with years of experience. You wanted this, you asked for this, yet you constantly curse your trainer for demanding you live up to the expectations of a man in training, when you're not -- and it's not their fault they are operating under false pretenses. That type of denial of one's own strengths and limitations frankly drives me batty.

So I spent approximately 70% of the novel frustrated with Annyn for getting angry with people for frustrating her plans, refusing to take any responsibility for the issues her recklessness brings to not only her life but the lives of those relatively innocent bystanders surrounding her. And until that point, I was convinced that Wulfrith could do better with literally anyone else. But once Annyn's deception is revealed, and she starts to realize that she's been foolish and deluded, the romance kicks into gear and with her trademark sizzle, Leigh treats readers to a story of two individuals who are utterly perfect for each other, in spite of themselves. When Annyn finally allows herself to embrace -- at least in part -- her feminine nature, she positively blossoms under the wary attentions of Wulfrith and his family. It's when she realizes that she doesn't have to deny such an essential part of herself, that as she is she is worthy in both Wulfrith's and God's eyes, that she finally reaches a much-needed level of maturity -- one that allows me, as the reader, to finally cheer for her reluctantly-realized romance with Wulfrith.

Leigh has a passion for this time period that shines with every carefully-crafted detail of this story. The setting, atmosphere, and dialogue are all beautifully suggestive of the time, each chapter rich with period detail. Wulfrith is an alpha hero worthy of any romance reader's dreams, and from his perspective I loved the manner in which Leigh contrasts the oft-times political nature of marriage during this time period with his radical desire to break the cycle of emotional abuse that characterized his parents' union. It's a beautifully realized, timeless message that allows Leigh to subtly weave a message of faith and godly purpose throughout Wulfrith's growing relationship with Annyn, the catalyst for the transformation of not only their lives, but the lives of their families, future generations, and a renewal of their faith.

While I remained frustrated with Annyn more often than not, The Unveiling offers a fascinating glimpse into the social and political climate of 12th-century England (as such, it could serve as a companion novel of sorts to The Greatest Knight by Elizabeth Chadwick). In addition to my issues with Annyn's characterization, this book has some unfortunate formatting issues (there are some odd spacing issues, and the default font is so tiny as to be nearly unreadable, and requires adjusting the font size to nearly the largest possible setting in order to read comfortably). Those issues aside, Leigh is an extraordinarily gifted wordsmith. Her passion for the time period and subject matter shines here -- she is so comfortable in this world that one cannot help but lose oneself in within the pages of this book, transported to medieval England, lost in the period's political turmoil and romantic possibilities. I look forward to exploring further volumes in this series soon -- this is a much-needed, refreshing voice in the historical market -- passionate, historically accurate romances grounded in life-changing faith.

12th century England: Two men vie for the throne: King Stephen the usurper and young Duke Henry the rightful heir. Amid civil and private wars, alliances are forged, loyalties are betrayed, families are divided, and marriages are made.

For four years, Lady Annyn Bretanne has trained at arms with one end in mind—to avenge her brother’s murder as God has not deemed it worthy to do. Disguised as a squire, she sets off to exact revenge on a man known only by his surname, Wulfrith. But when she holds his fate in her hands, her will wavers and her heart whispers that her enemy may not be an enemy after all.

Baron Wulfrith, renowned trainer of knights, allows no women within his walls for the distraction they breed. What he never expects is that the impetuous young man sent to train under him is a woman who seeks his death—nor that her unveiling will test his faith and distract the warrior from his purpose.
Posted by Unknown at 12:11 PM