Review: An Offer From a Gentleman by Julia Quinn 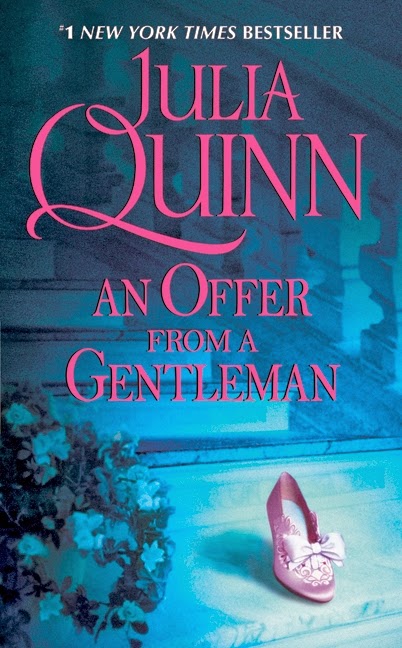 From her earliest childhood memories, Sophie Beckett knew the truth of her parentage, and as a consequence, her place relative to the world of the rarefied English ton -- strictly outside the elite ranks of that social whirl. As the bastard daughter of the Earl of Penwood, Sophie knew she rested behind the thinnest veneer of respectability -- claimed as the earl's ward, but with the truth of her parentage write clear on her features, until her tenth year Sophie enjoyed a life that, although lacking the emotional security of family ties that she craved, provided for the physical needs of food, shelter, and education. But everything changed when her father married a widow with two daughters, and Araminta, the new countess, taught Sophie what it meant to be shamed for possessing antecedents well and truly out of her control. For four years, the girl was further ostracized, hated by the woman she'd hoped to look on as a mother and ridiculed by her daughters Rosamund and Posy. With the earl's sudden passing, Sophie found herself unacknowledged and penniless, thrust into a life of servitude, at the mercy of Araminta's every whim. Six years pass, and her dreams worn thin under the grinding heel of Araminta's shoe, when invitations to the famed Bridgerton masquerade ball arrive, Sophie seizes the chance to, for just one night, be something more than a scorned illegitimate daughter -- to be just her, a woman reborn, a world of possibilities at her feet. It was just one night -- and one night couldn't possibly cause any harm. But sneaking into the masquerade, arrayed in a dazzling silver gown, Sophie underestimated the power of one night to transform her life forever, for she never counted on meeting Benedict Bridgerton...

Benedict, the tall, lanky, impossibly handsome second Bridgerton, is heartily sick of society in general and his mother Violet's matchmaking schemes in particular. But when he spies a mysterious woman in silver at his mother's masquerade, he knows his life has changed forever -- for this woman, known to him only by her winsome smile and electrifying presence, this woman, over the course of one brief encounter, captures his heart forever. When she flees the ball, leaving only a monogrammed glove as a clue to her identity, he's devastated, and spends months searching for her among the ton, to no avail. And as the months become years, he becomes convinced his once chance at a love match to rival his parents' has passed -- sure, that is, until he rescues housemaid Sophie Beckett from the unwelcome advances of her employer at a country party. But Sophie is a servant, a wholly unsuitable match for the younger brother of a viscount...isn't she? Be that as it may, she's the only woman to make his heart sing since the long-ago masquerade, and so he proposes an audacious scheme -- Sophie will become his mistress. However, Benedict never reckoned on Sophie's horror of inflicting her illegitimacy on a possible child, or the secrets she's been holding dear. When the truth is finally revealed, will true love conquer all, or will social conventions shatter the promise of a love that flowered one magical night, when a masquerade gave an unlikely pair the courage to reveal their hearts?

The more I read Julia Quinn, the more I become convinced that this woman can do no wrong. The Bridgertons have quickly become one of my all-time favorite fictional families, and with this third installment, Quinn blends her trademark warmth, wit, and humor with a fairy tale retelling that is at once both literal and wholly new. The Duke and I and The Viscount Who Loved Me, which showcased the love stories of Benedict's sister Daphne and brother Anthony, respectively, are essential fairy tales in and of themselves -- delightfully romantic, humorous, heartfelt confections that establish Quinn as a gold standard in romance. But with An Offer From a Gentleman, Quinn takes the conceit one step further, weaving the tropes of the Cinderella story -- the evil stepmother and stepsisters, shoes, a ball, secret identities -- into the Bridgerton world and making the classic tale her own.

Lest her retelling become too literal, Quinn introduces Sophie and Benedict, sparks fly -- and then circumstances conspire to keep the would-be lovers apart for two years. And this time jump is one of the things that impressed me the most about this retelling of Cinderella, revealing Quinn's determination to thoroughly test the fairy tale trope of love at first sight to the max. Both Sophie and Benedict construct ideals, fantasies that arguably see the best potential in each other but just as arguably fall short of reality. For Sophie's determination to keep her secret, reveals the great irony of the title -- Benedict's offer to make Sophie the maid his mistress means that in perhaps the most important respect -- respect of Sophie as an individual, regardless of social station -- that he is no gentleman. His pressure to get Sophie to acquiesce to his plan is inexcusable and short-sighted, but it's a testament to Quinn's characterization and plotting that he still emerges as a hero worthy of keeping company with Simon and Anthony. This Bridgerton, of the charmed life, loving family, and hidden artistic bent, is desperate to be known and loved as an individual, yet is just as susceptible to the social pressure to marry well until he realizes that in Sophie he has a woman who'd love him if he were a pauper -- and how, therefore, could he do any less in return?

Perhaps it is the comfort of familiarity, but with each successive installment that I read of Quinn's Bridgerton series I fall more and more in love with this delightfully quirky, passionate, close-knit family. Even more than the previous two installments, this novel showcases their legendary family bond, and gives their matriarch Violet a chance to shine, far beyond merely urging each of her children in turn towards matrimony. It could be tempting, with Quinn's breezy writing style and irrepressible sense of humor, to gloss over the weightier themes of family and belonging, of seeing, being seen, and being truly accepted as one is, that she explores within the pages of Benedict and Sophie's story, but that is what makes her books such gems. She blends the heady flush of new romance with a refreshingly honest look at what it takes to make a relationship last beyond the thrill of discovery and the first rush of passion. An Offer From a Gentleman is romantic escapism at its finest, yes -- but escapism laced with thought-provoking nuggets shedding light on identity, self-worth, and the respect of one another required to make a relationship work that once again elevates Quinn's storytelling from the realms of the ordinary to the extraordinary.

Sophie Beckett never dreamed she′d be able to sneak into Lady Bridgerton′s famed masquerade ball - or that "Prince Charming" would be waiting there for her! Though the daughter of an earl, Sophie has been relegated to the role of servant by her disdainful stepmother. But now, spinning in the strong arms of the debonair and devastatingly handsome Benedict Bridgerton, she feels like royalty. Alas, she knows all enchantments must end when the clock strikes midnight.


Who was that extraordinary woman? Ever since that magical night, a radiant vision in silver has blinded Benedict to the attractions of any other - except, perhaps, this alluring and oddly familiar beauty dressed in housemaid′s garb whom he feels compelled to rescue from a most disagreeable situation. He has sworn to find and wed his mystery miss, but this breathtaking maid makes him weak with wanting her. Yet, if he offers her his heart, will Benedict sacrifice his only chance for a fairy tale love? 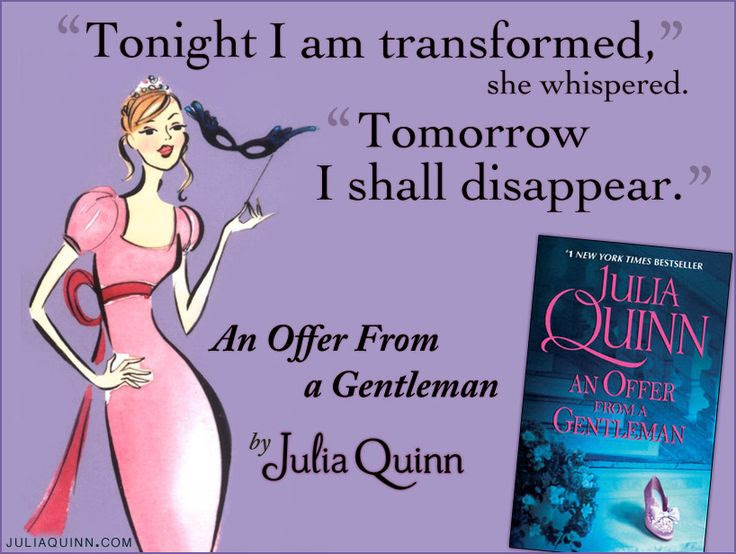 So, I know the costumes aren't right, but hey when we're talking fairy tale casting who cares about accuracy, eh? All while I was reading An Offer From a Gentleman I kept picturing Benedict and Sophie as Richard Chamberlain and Gemma Craven from my beloved 1976 version of Cinderella, The Slipper and the Rose. 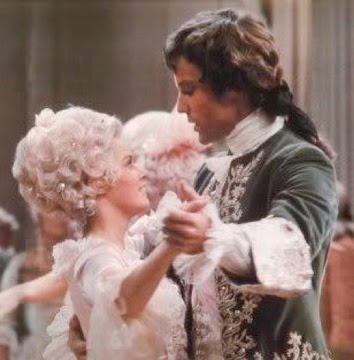 I mean look at this profile -- does that scream artistic, brooding aristocrat or what? :) 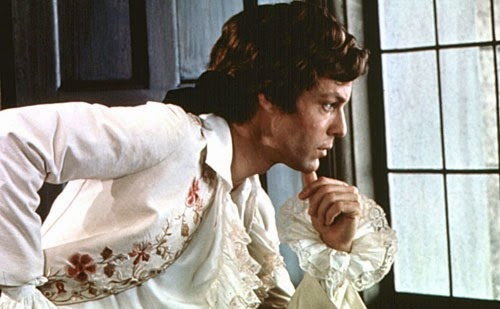 The weird thing about this is that Benedict and Sophie are barely mentioned in the remainder of the books in the series. And Hyacinth makes an allusion to them in her book (It's in His Kiss), but the subject is quickly changed as if the family is embarrassed to talk about them. Maybe I read it wrong, but it felt really odd to me with this family.

Oh, and the next one, Romancing Mr. Bridgerton is still my favorite in the series---though I am enjoying Gregory's book right now (On the Way to the Wedding), I don't think it's going to live up to Colin's story.

@Kaye - Really? That's interesting. I'm curious to read how that plays out now...maybe it isn't intentional on Quinn's part -- more a case of too many other things going on? Of course out of all of them, thus far I'd say Benedict and Sophie have the greatest potential to be withdrawn introverts. ;)

I love that movie. :) I remember liking this one, although I didn't like the ending. Kaye's right, Sophie and Benedict are never brought back into the series after this book, unlike with the other Bridgertons.

That is a bummer about Benedict and Sophie. Yeesh, Ms. Quinn, way to reinforce their acceptance-related issues. :P

Aw, this brings back memories. I remember watching this Cinderella re-telling on VHS. It's been years since last I watched it though I still have that VHS tape. Somewhere. :D

Who is lady whistle down?!