Review: The Homecoming by Dan Walsh 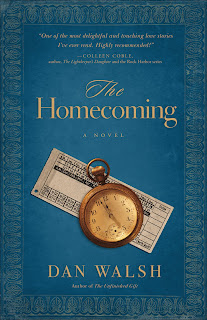 A reluctant war hero returns home and encounters a new chance at love.

No sooner has Shawn Collins returned home from the fighting in Europe than he is called upon to serve his country in another way – as a speaker on the war bond tour. While other men might jump at the chance to travel around the country with attractive Hollywood starlets, Shawn just wants to stay home with his son Patrick and his aging father, and grieve the loss of his wife in private.

When Shawn asks Katherine Townsend to be Patrick’s nanny while he’s on the road, he has no idea how this decision will impact his life. Could it be the key to his future happiness and the mending of his heart? Or will the war once again threaten his chances for a new start?

Dan Walsh does not disappoint in this tender story of family ties and the healing of a broken heart.

In The Homecoming, Shawn Collins is a newly-minted war hero, recalled home to grieve the sudden loss of his wife and to care for his young son, Patrick. Shawn is a man adrift, lacking focus and purpose since learning of his beloved wife’s death – an event that occurred while he was halfway across the world in a war zone, attempting to evade capture by the Germans after being shot down in enemy territory. Forced to face a life he’d never imagined living, Shawn battles coming to terms with the overwhelming changes life has thrown his way in the span of a few short weeks. The death of his wife, a near escape, reconciliation with his father, and the demands the Army continues to place on his time leave Shawn grappling with his grief and question his faith in the God who would allow such heartache to rain down in his life. From the glamour of an all-star war bond tour to life in London under the threat of German rocket attacks, Shawn must decide whether or not to accept God’s offered gift of second chances and new beginnings grown from the ashes of wartime heartbreak.

Dan Walsh’s debut novel, The Unfinished Gift, was a sweet story of forgiveness and reconciliation set in the American homefront during World War II. While stylistically Gift was not my usual read, I enjoyed Walsh’s nostalgic recreation of WWII homefront life and was curious to see the resolution of the Collins family story. Homecoming contains all the strengths of Walsh’s first book – the evocative, nostalgic sense of time and place, and an emphasis on faith and family - and improves on them. The book’s greatest strength is Shawn’s spiritual and emotional “homecoming” journey. Shawn’s character is well-drawn and the emotional roller-coaster he experiences throughout the novel is realistically portrayed, particularly in how he confronts questions of faith. I really enjoyed reading the sweet wartime romance Walsh creates in this novel. I love how he shares Shawn’s wartime experiences while still giving the story a unique homefront perspective, this time seen through the eyes of a soldier on a war bonds tour, witnessing the sacrifice of those left behind to support the troops. Sure to appeal to fans of Richard Paul Evans or Nicholas Sparks, The Homecoming blends wartime romance with a dash of faith and is a satisfying conclusion to the Collins family story of heartbreak and restoration. These stories would make wonderful TV movies – keeping my fingers crossed that they’re brought to life on-screen someday.

I don't know what to say, what an amazing review. It's like you captured every part of the story, everything I'd hope a reader would catch. And then you wrote it all so well, in such a short space.

I have read so many great reviews, but I think your review is among my favorites, if not my favorite, so far (I've read over 60). Thanks so much for reading, then telling others about The Homecoming.

Wow, thank you sir for taking the time to comment, that means a lot!

Wow Ruth. This is a great review. Well done :)