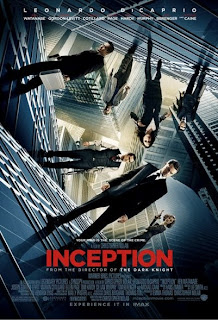 This may be one of my shorter movie reviews, because honestly I’m still sort of processing this movie. I saw Inception Friday night, and I really, really enjoyed it. I’m a big fan of director Christopher Nolan’s last couple of films (Batman Begins, The Dark Knight, and The Prestige), so I will admit to being predisposed towards wanting to be impressed with his newest effort. Inception is a beautifully constructed, thought-provoking sci-fi caper flick with some mind-blowing special effects. While I was predisposed to liking this movie, for me it delivered on every level and honestly surpassed my expectations.
As I mentioned, at its core Inception is a heist movie glossed up with eye-popping special effects. The team of extraction specialists – dream thieves – are incredibly well-cast and work really, really well together on-screen. The team is led by Cobb, the troubled Extractor played by Leonardo DiCaprio. I really, really liked DiCaprio in this role – his character is brilliant, troubled, and unsettling. The Point Man is Arthur, played by Joseph Gordon-Levitt, and I just have to say I didn’t realize until now how hot he is…just sayin’. *g* Arthur’s character was interesting – not quite in a position to be the “brains” of the operation, he’s brilliant at executing Cobb’s plans and extremely capable. Loved how Arthur pushed back when something didn’t “feel” right, but his loyalty to the team wouldn’t let him back out of the job. The Architect, Ariadne, is played by Ellen Page, and honestly given the rest of the cast I was concerned she’d be the weak link. However, she more than delivers in her role as Cobb’s conscience, I guess you could say, and provides an excellent counterpoint to Cobb’s character. My favorite team member was the Forger Eames, played by Tom Hardy of Wuthering Heights fame. His character was just fantastic and hilarious, and managed to steal every scene he was in.

Other notable casting includes Ken Watanabe as Saito, the Tourist, and I don’t think he’s ever been creepier to be quite honest. Marion Cotillard brilliantly plays the Shade, Mal – and I really, really don’t want to spoil her character. She’s by turn frightening and heartbreaking. There are also a couple of Nolan’s usual suspects making appearances. Michael Caine has a brief role as Miles, Cobb’s one-time teacher (and father? – a bit confused on that point). Cillian Murphy sadly loses his accent to play the Mark, businessman Robert Fischer, Jr. I would’ve loved more insight into his character, like how he developed his mental defenses against extraction, but one really can’t expect that in a caper flick I suppose.

The visuals of this movie are absolutely stunning throughout. Nolan and his team are definitely breaking new ground here – honestly I feel that way about the entire movie. I can’t remember offhand the last time I saw a film and left the theater feeling that I’d experienced something wholly original. The premise of Inception is extraordinarily disturbing, since Cobb & company specialize in infiltrating and stealing the very essence of what makes us individuals – our minds and thoughts. There are no heroes in this film, since by the end of the movie it is apparent that Cobb & company – especially Cobb – are caught in a vicious cycle of largely, if not entirely, of their own making. For me, the structure and the visuals of this film made it utterly absorbing. And one final comment:

The final scene of this movie just killed me. I mean in hindsight it makes perfect sense, but I was one of many people in the theater on Friday that let out a collective “no!!” By the end of the film, I was invested enough in the story and the characters, really in the world of the film, that I wanted everything I’d seen up to that point to be in the “real” timeline. I wanted Cobb to really achieve his dream. But like the entire movie, Nolan forces you to rethink what’s real and what’s a dream, and brilliantly constructs a dream on-screen to completely absorb viewers. Well played IMO. Thoughts? :)
Posted by Unknown at 4:32 PM

My boss saw this movie over the weekend and was telling us today that she thought it was really dumb.

A friend of mine said the same thing as you: really good but still processing. He thinks he'll need to see it a second time.

@heidenkind - I've heard both extremes, LOL! I really liked it, but then again like I said I was predisposed towards it to begin with. But honestly what I loved most was seeing something that felt so completely original, and fantastically well-constructed. I'd be curious to hear your thoughts.

@Juju - I know, me too...though I'll probably wait for DVD to see this one a 2nd time. Need to start watching my movie $ better. :)

I also like Nolan's work, but I haven't been too sure about seeing this in the theater. Your review intrigues me. My husband and I are often saying how we would love to see something original, and we have not seen a movie in a theater in quite sometime because it's so disheartening to spend the time and money and be disappointed. May have to make an exception for this one.

Thanks for the review.

@bZirk - I hope you & your husband go see Inception while it's in theaters - the special effects are just magnificent on the big screen! I do know what you mean about the quality and originality of movies - there's a lot out there that's just silly or derivative. Thanks for the review feedback!