I originally reviewed Chris Botti's Italia album in November 2007. This project is available in two formats - a single CD and a CD/DVD digipak. This review is for the digipak edition. 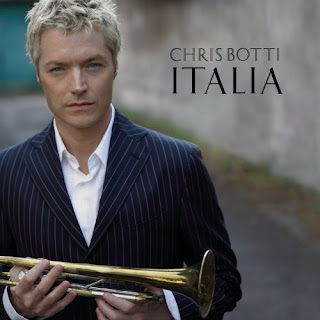 With Italia, Chris Botti has once again delivered a lushly orchestrated album of astonishing beauty, full of memorable, breath-taking performances. He not only proves there's wisdom in the old adage, if it ain't broke, don't fix it - but instead of resting simply on his laurels, with each successive album he's succeeded in making his "formula" of richly orchestrated, romantic standards better. Where To Love Again focused on duets, Italia focuses on Botti's trumpet playing with only a handful of vocal tracks (similar to his break-out album, When I Fall In Love). The inspiration of the album is, of course, the music of Italy, and in keeping with that theme Botti interprets two compositions by master film composer Ennio Morricone - the hauntingly beautiful "Deborah's Theme" from Once Upon a Time in America and "Gabriel's Oboe" from The Mission. The lushly orchestrated, David Foster-penned "Italia" pairs Botti with one of contemporary Italy's most famous voices, Andrea Bocelli. "Estaté" is Botti's gorgeous solo version of the track that he accompanied Bocelli on for the tenor's Under the Desert Sky project. Three of the tracks on Italia mine the realm of classic popular song, evocative of Italy because of their close association with interpretations by the likes of Frank Sinatra and Dean Martin. "The Very Thought of You" is a sublime duet with Paula Cole - her voice, featured on When I Fall In Love and To Love Again, once again proves to be an ideal complement to Botti's trumpet. With her whisper-soft vocal and Botti's velvety-smooth trumpet playing, it's a seductively dreamy performance. "I've Grown Accustomed to Her Face" pairs Botti with Dean Martin (this track also appears on the Forever Cool duets album). The arrangement is swinging and playful, and Botti's trumpet effortlessly plays off of Martin's smooth vocals. As he proved with To Love Again, Botti is an expert at complementing a vocal, and the fact that the duet with Martin sounds so real, so convincing, is a testament to his skill as a performer. The trio of up tempo numbers is rounded out with "The Way You Look Tonight," the Fields-Kern classic featuring a sparkling arrangement that I can easily imagine Sinatra swinging to in his prime. The album ends with a stunner - Botti's jaw-droppingly gorgeous rendition of "Nessun Dorma," the highlight of the instrumental tracks. As some other reviews have noted, there's not much improvisation on this disc. However in my opinion the lack of improvisation highlights Botti's skill as a trumpeter -- there's no room for error in a song like "Nessun Dorma," and he delivers a spine-tingling, spot-on accurate performance. The control he exhibits on such tracks is quite frankly awe-inspiring.
The deluxe edition features a DVD with four bonus audio tracks. The short DVD (it's about twenty minutes) features some behind-the-scenes footage of the making of the album, the highlights being Bocelli in the studio with Botti recording "Italia" and Botti talking about his inspiration for making the album. What makes this edition really worthwhile, though, are the four bonus tracks - "Emmanuel," "Flamenco Sketches," "If I Loved You," and "Smoke Gets in Your Eyes." "If I Loved You" is another superb duet with Paula Cole, her vocal perfect for the song's romantic, wistful tone (incidentally in the DVD portion Botti states that Cole records all of her vocals for his projects in one take). "Smoke Gets in Your Eyes" is what I like to think of as a Casablanca song - the arrangement and delivery evoke all the romance of that film and others like it - it's classy and timeless. Italia is another wonderfully addictive offering from Chris Botti's seemingly endless reservoir of creativity and talent. I had the thrill of seeing him perform live earlier this year - if you ever get the chance, GO. When you see him perform live and cut loose with his band, and then contrast that with the beautifully orchestrated, soaring trumpet playing he exhibits on an album like Italia, one's respect for the scope of his talent increases tenfold.
Posted by Unknown at 5:57 PM

Never heard of this musician before... thanks for letting me know about him and his work, Ruth!

Ooooo I need to check this one out.