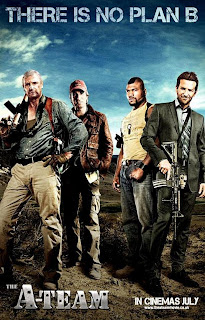 After the big push to get everything out of the old apartment was finally (FINALLY!) completed last Thursday, I took Friday to recover a bit & begin the settling in process. Then Saturday I left all thoughts of the disaster area that is my new abode behind and went to see The A-Team movie with my friend Kaye. I should probably give you a little bit of context here…I absolutely adore the television show, so this film had A LOT to live up to. Hannibal, B.A., Face, and Murdock are pop culture ICONS, for goodness’ sake! Could the hilarious, wonderful “buddy” chemistry between the new team of actors even come close to the combination of George Peppard, Mr. T, Dirk Benedict, and Dwight Schultz? More importantly, could ANYONE make me forget, even momentarily, my long-standing infatuation with Dwight Schultz’s Murdock?! Critical questions people, critical questions…
I’m THRILLED to report that the essence of the A-Team remains intact, and in a few instances I daresay improved, in this new movie. If you’re in the mood for a fun summer action flick, The A-Team delivers in spades. It’s every bit the insane, improbable, escapist brand of entertainment that defined the TV show, with explosions and action amped up to make an appropriate big screen spectacle. Story or logic (for me, anyway) isn’t really the point of The A-Team, so I’m going to talk about the characters for a bit and how the new actors measure up to their classic small-screen counterparts.

First up, there are the brains of the A-Team, Hannibal. Now I love and adore George Peppard (Breakfast at Tiffany’s anyone? Hello? Oooh, or even better, Home From the Hill? Excuse me while I swoon…I should blog about Home, if you are in the mood for something epic about wildly dysfunctional people it fits the bill). No one will ever be able to match his unique brand of swagger and the way he says “I love it when a plan comes together.” However, Liam Neeson was surprisingly successful as Hannibal. I am a huge fan of his work and think he’s a fantastic actor, but I had some reservations about whether or not he could pull off balance between action and comedy that makes Hannibal & team so much fun. Neeson just seemed like he was having a blast making this movie, and he brings all of the bravado and humor one could wish for to the role, while being rather more believable as an intense, action hero type.

If I had to guess, I’d say Mr. T’s portrayal of B.A. Baracus is probably the most well-known and memorable character to come out of the TV show. I’ve got to say, Quinton “Rampage” Jackson did his homework and brings his own spin to all of B.A.’s memorable quirks, from his fear of flying to his obsession with that black van. The script here adds a smidgen of extra depth to B.A.'s character, and Jackson plays the role really well.

Jackson played off Sharlto Copley’s Murdock beautifully. That pair of characters has always cracked me up, and thankfully this movie doesn’t lose any of that entertainment value (I just loved the moments when Murdock would bribe B.A. with his favorite foods, too funny!). Murdock is the character that concerned me most when I heard about an A-Team movie. I adore Dwight Schultz in that role, and Murdock has always been far and away my absolutely favorite member of the team. Murdock’s hot people, I’ll just go ahead and say it. If you don’t believe me, watch my all-time favorite Murdock-centric episode, “The Spy Who Mugged Me” sometime (it’s from season 5). In fact, here is a link to the episode (not that I'm trying to push the issue or anything, haha!!). Before I get too distracted and turn this post into a Dwight Schultz lovefest, let me refocus on Copley’s Murdock. He is thoroughly entertaining, and definitely brought an extra level of crazy to the character that makes the television Murdock seem almost sane(r).

I’ve never really given Bradley Cooper much thought as an actor, but he really worked for me as Face. Most fans of the TV show that I know loved Dirk Benedict as Face first and foremost, and I get that – I mean what’s not to love, the guy is gorgeous! But I’ve always been a Murdock fangirl, which is just another indication of how weird I am, as if anyone reading this blog needed any more reasons to thinks so (HA!!!) – all that to say, I never had as much invested into Face’s character as other fans of the show, so I feel like I could come to Cooper’s portrayal with a relatively open perspective. Cooper’s take on Face is a bit more angsty than I can ever remember the character getting from the TV show. Here the filmmakers go to some pains to show that Templeton Peck isn’t “just another pretty face” (sorry, couldn’t resist!), but he has some relationship baggage dangit (thanks to Jessica Biel’s character, the “one” girlfriend Face was apparently willing to get serious with a couple years ago). I did like how the film matures Face a bit and allows him to develop his own insane schemes.

There are a couple of nods to the original show scattered through the film that I really appreciated and want to mention, starting with how the team first meets in Mexico, perhaps hearkening back to the first episode of the show which also takes place there (it’s the little things, right?). Jessica Biel’s character, Charisa Sosa, is, all things considered, pretty unbelievable (I’ve never seen a female member of the Army where such spiked heels while on duty, but whatever), but I didn’t mind her. In the right role I really like Biel’s performances (especially in The Illusionist and Easy Virtue), and I sort of felt the Sosa character was a nod to Amy (Melinda Culea) and Tawnia (Marla Heasley), female sidekicks with extended episode runs on the television show. I also loved the fact that Colonel Morrison (played in the movie by Gerald McRaney) shows up in this movie, since it’s also a Morrison who authorized the mission that gets the team in so much trouble in the show. My favorite twist on a TV show character, though, has to be Lynch, played here by Patrick Wilson. In the television show, Lynch was simply an officer obsessed with capturing the A-Team, while in this movie Lynch becomes the latest in a succession of smarmy CIA agents*. The recurring jokes about “knowing a Lynch” back in the day cracked me up. It was a lot of fun watching Patrick Wilson fall apart by the end of the movie, and it was REALLY fun watching Liam Neeson beat up on him, I cannot lie.

*Note: This movie doesn’t require a sequel, but the door is definitely left open to the possibility. I’d like to state for the record that they NEED to make a sequel, since at the end of this movie Jon Hamm is the new Lynch, and I’m dying to see how that plays out.

The A-Team pretty well covers all of my requirements for a summer popcorn flick. It’s action-packed, fun, escapist entertainment at its best. Suspend your disbelief at the door and enjoy the ride, know what I mean? Oh, before I forget, I have to mention that I loved Alan Silvestri's score for this movie. The original theme music of the show makes a couple of welcome appearances, but beyond that it's just a really fun action show that complements the action on-screen nicely. So, any fans of the show want to share your thoughts? :)

And just because I can...my darling Murdock. Isn't he PRECIOUS?! :) 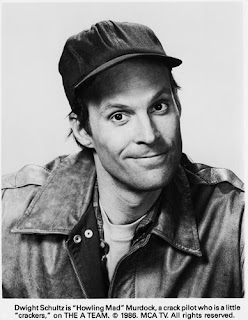 Whoot! I'm so glad to hear. Me and Mr. Whimsy are huge fans and can't wait to see this flick :) Thanks for the review.

Just saw it this afternoon. LOVED IT! Better than I expected. And I cannot believe I missed Dirk Benedict and Dwight Schultz's cameos...guess I'll have to watch it again!

@Lori - So glad you loved it! Isn't it just what the doctor ordered after this last week? LOL!

Okay, as to the supposed cameos...I actually saw it a 2nd time Thursday night and I scoured the FL prison scene and the hospital scenes...I couldn't see Benedict or Schultz ANYWHERE...I'm starting to wonder if the scenes were cut and will show up in outtakes??

I was grinning while I read this review of the A-Team movie! Yes! These are just like my thoughts on it! I thoroughly LOVED it. :D It was pretty awesome, and I'm so glad that I got to see it!
So you didn't see the cameos? Did you sit through all the credits at the end? My mom and sister and I watched all the crediits (we always do) and after the credits is where the cameo showed up. (now you have an excuse to go see it again.)
This is a neat blog, by the way. I'm doing a similar thing on mine, reviewing. But I'm reveiwing books instead.
http://the-reading-of-a-book.blogspot.com/

@Kirstin - Thanks so much for visiting my blog and taking the time to comment! Always great to meet another A-Team fan. :) And I cannot BELIEVE the 1 time I don't sit through the credits I miss some great bonus scenes! Argh!!! ;) Thanks for clearing up that mystery.