Day one of the great move of 2010 is over, and my brain is mush. But I don't want things to get too stale on the ol' blog until I'm back up and running in the new apartment (and hopefully saner, LOL!), so I thought I'd pull a couple of old music reviews from the "archives" that I've never shared on this blog. First up is a couple of Chris Botti album reviews (a.k.a. Ruth's Future Husband, LOL!). I originally reviewed To Love Again in December 2005. 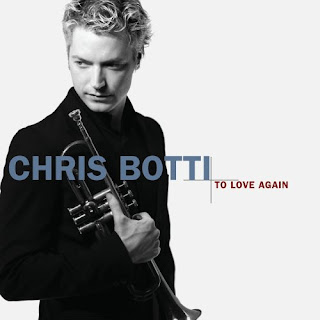 To Love Again is Botti's follow-up to last year's collection of romantic standards, When I Fall In Love. That album was primarily a collection of lushly orchestrated instrumentals that showcased Botti's breathtaking skill with the trumpet, supplemented by select duets with Paula Cole and Sting. In contrast, To Love Again features vocalists from across the musical spectrum duetting with Botti on nine of the disc's thirteen tracks. My favorite duet tracks include Michael Buble' singing "Let There Be Love" and Renee Olstead singing "Pennies from Heaven." The arrangements of both songs positively sparkle and give Botti a chance to really cut loose and swing with his trumpet. Botti's trumpet playing is often likened to Chet Baker's mellow sounds, but on these tracks I found the collaborations reminiscent of the type of recording Harry James and Tommy Dorsey used to do with their bands...the vocalists (stars in their own rights) complemented the music, and vice-versa. Olstead's performance is particularly noteworthy...her outstanding vocal skill has grown by leaps and bounds since the release of her self-titled jazz album last year. Each of the duets on this disc are perfect examples of an ideal give-and-take relationship between the vocal and the trumpet...one never seeks to overwhelm the other, which makes the listening experience absolutely intoxicating (some of Sinatra's concept albums that he recorded for Capitol Records - particularly ones arranged by Nelson Riddle - are excellent examples of this effect). To Love Again is a brilliantly executed album and I cannot wait to see the artistic heights Chris Botti takes his listeners to with his next offering!
Posted by Unknown at 5:50 PM