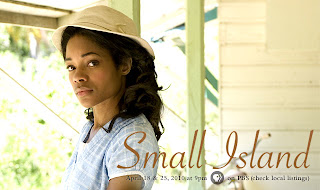 I finally started watching Small Island, the final offering of the 2010 Masterpiece Classic season. Halfway through the program, I am incredibly impressed. Here's the brief summary from the PBS website:
"This island is too small if you have big dreams...Without dreams we are nothing."
Hortense in Small Island

Born into a broken home and an impoverished life in Jamaica, Hortense (Naomie Harris) longs for a fulfilling life in England; one with a fine house and a doorbell. The door of opportunity swings open, and Hortense is married and on her way to the promised land of post-war Britain. Steadfast dreams are soon tested by hard realities as Hortense and her husband Gilbert (David Oyelowo) face racism and poverty. In the small-minded country, their only saving grace is Queenie (Ruth Wilson, Jane Eyre). But Queenie faces her own disillusionment, married to the kind but dull Bernard (Benedict Cumberbatch, The Last Enemy). Bonded by high hopes and broken dreams, these four lives fuse together in a powerful and hopeful story of love and fulfillment. Small Island is based on the award-winning, bestselling novel by Andrea Levy. (Two episodes; 90 minutes each; TV-MA, S)

With an epic feel, and covering a nearly ten year time frame, Small Island is the fierce and passionate story of five individuals and how their lives intersect during and after World War II. It's an in-depth look at a period in English history that the mystery series Jericho first introduced to me a couple of years ago - Jamaican immigrants to England during the postwar years. England may not have had an official segregation policy like the United States, but prejudices were very much alive, only perhaps manifested in a different manner.

At the heart of this story are two women from opposite sides of the world, but not so different when it comes to the big dreams each cherished for their lives and how those dreams were often starkly different from reality. Naomie Harris plays the prim and proper Hortense, who dreams of becoming a teacher in the "Mother Country" and having the type of life she's always read about and dreamed of growing up in Jamaica. Harris is perhaps most recognizable as the character Tia Dalma from the second and third Pirates of the Caribbean films. Hortense will do anything to keep her illegitmate origins a secret, and obsessed with the idea of living the English "dream" life she'll even marry a man she doesn't love in order to secure passage. On the opposite end of the spectrum is Queenie, played by the superb actress Ruth Wilson. I became a fan of hers when she debuted opposite Toby Stephens playing the title role in Jane Eyre. Wilson has a wonderfully expressive face and I think a great career ahead of her, especially with strong roles like Queenie on her resume. Queenie is an interesting character - she marries the generally kind but dull Bernard in order to escape having to return to her family's farm. While marriage has freed her from returning to her past, it presents another kind of cage as her husband is loathe to change anything and is very set in his ways. But when he enlists, Queenie begins to become more self-sufficient as the proprietress of her own boarding house. For the time period Queenie is remarkably free from prejudice and seems to have the gift of seeing people as they are, instead of in some limited "box" society tries to keep them in. Tied to other men, both Hortense and Queenie have no idea that both of their lives have been touched by the same man - the rebellious and strong-willed Michael, who grew up with Hortense on Jamaica.

Queenie's husband Bernard is played by a favorite of mine, actor Benedict Cumberbatch. Cumberbatch first came to my attention when he played William Pitt in the film Amazing Grace, and that was followed by a variety of roles in films like Atonement and series like Miss Marple last year. Later this year he'll be seen on Masterpiece Mystery in the new, modern-day Sherlock series (can't wait!). Bernard is pretty much the polar opposite of Queenie - quiet and repressed, but in spite of this he adores her. I found the scenes where Bernard was interacting with his shell-shocked World War I veteran father extremely insightful - one really gets the sense that Bernard is at least in part so buttoned-up because he fears turning into his father, whose wartime experiences left him permanently, emotionally volatile. David Oyelowo plays Hortense's eventual husband Gilbert. Oyelowo is perhaps most familiar to British television viewers for the years he played Danny on the show Spooks (known over here as MI-5). Gilbert's character really rather broke my heart in this episode. An extremely kind man, with dreams of a career in law, he joins the British RAF hoping to learn a trade and gain opportunities to further his education. The reality of his situation is far from ideal as all the Jamaican soldiers find themselves doing menial labor and not seeing the frontline action they were promised. But Gilbert doesn't let this prejudice completely sour him - I loved that he and Queenie were able to become friends and just see each other as people, instead of dwelling on their differences.

Michael, played by Ashley Walters, is the "hurricane" that blows through both Hortense's and Queenie's lives, changing them forever. He seems blessed by luck and is remarkably oblivious to the consequences he leaves in the wake of his actions. I can't wait to see how Hortense, Queenie, and their respective husbands come to terms with each other and how their lives have been touched by the dreams and passions brought to life by encounters with Michael.

The look of this film is just spectacular. Every frame is filled with rich color and shadows and possibilities. It's also saturated with the period detail I love to see, from the sets and household furnishings to each actor's costumes. The score is also absolutely lovely, a superb example of composer Martin Phipp's work (should be familiar to all fans of the show North & South and the oh so fabulous Richard Armitage *g*). Also, kudos to the filmmakers for the excellent direction and camera work and scripting that allows the viewer to flow effortlessly between the postwar "present" and the flashback scenes. Small Island isn't just lovely to look at, it's a wholly visual and emotionally engaging film experience. My review of part two is forthcoming - till then, if you're interested in another perspective please check out this excellent review of the series on Austenprose.
Posted by Unknown at 11:09 AM

I just watched this as well. Heart-wrenching, but very well done. Not at all predictable plot-wise, either.

@Lori - My review of the conclusion should be up tonight. I agree with you, this program was heart-wrenching, but hopeful. The resilency of the human spirit is on full display - and I definitely didn't expect some of the plot twists that lead to that...

@Juju - Small Island is a wonderful show, really surprised me by how much I enjoyed it and was moved by the storytelling.