Review: Ghost of a Chance by Amy Patricia Meade 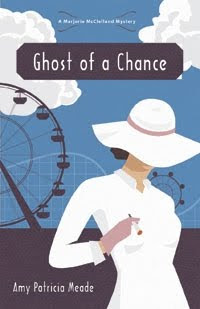 When a man goes up the Ferris wheel very much alive, but comes down dead, local small-town police suspect a heart attack. But one person is calling it foul play, a Miss Marjorie McClelland, full-time mystery writer/part-time sleuth. In 1935, Depression-era Connecticut, Marjorie’s dogged determination and independence is a breath of fresh air to some, and a source of consternation for others.

Marjorie’s fiancé, an achingly handsome police detective, wishes she’d just stay home and act a little more ladylike. Undeterred, blonde and lovely Marjorie charms her way into what becomes a full-scale murder investigation. But not without the maddening assistance of a bored, yet altruistic, millionaire, Creighton Ashcroft, who, when he’s not swapping barbs with Marjorie, tries to impress her by doing a bit of aristocratic snooping on his own.

Only a short time has passed since amateur sleuths Marjorie and Creighton closed their first “case” – a mystery surrounding a long-buried murder that was uncovered at Creighton’s newly-purchased home. Marjorie is hard at work turning their crime-solving caper into a true-crime novel while furthering a romantic relationship with Robert, the handsome local detective who wishes she was just a bit more conventional. Meanwhile, Creighton is still hopelessly in love with Marjorie and determined to win her affections, even though she views him as nothing more than a friend (and an often annoying one at that). At the annual carnival, a prime opportunity for Marjorie and Creighton to spend time together drops in their laps when a man begins a Ferris wheel ride very much alive and ends it quite dead. Before Creighton and Marjorie realize it, they find themselves caught up in a case involving bigamy, hidden identities, and industrial espionage. To top it off, much to Marjorie’s chagrin, Creighton may just be ready to move on when the case brings him into contact with an old flame. Marjorie finds herself investigating her own feelings as much as the murder, and the clock is ticking on her chance of finding the killer and making a very important decision about her future before it’s too late.

The first Marjorie mystery, Million Dollar Baby, was a delightful surprise all around, though a tad on the longish side. Ghost of a Chance takes everything that worked in the first book and improves on it. The characters are quirkier and more richly developed, the story is plotted with greater tightness and precision, and the pacing is more focused and keeps events flowing at a brisk pace. Meade peppers the storyline of Ghost of a Chance with enough red herrings to keep you guessing, giving the mystery several rich layers that are a great deal of fun to watch unfold on the page. I also love the 1930s setting. Meade mixes the small-town feel of a mystery show such as Murder, She Wrote and endows it with enough period charm to bring the Depression-era US to vivid life. But more than setting details, Meade anchors her characters in the time period. Meade crafts her characters with a cinematic touch, and for classic movie lovers it’s impossible not to imagine Marjorie’s adventures unfolding in black and white like the classic screwball comedies of the time period.

I didn’t think it would be possible to enjoy Creighton and Marjorie’s developing relationship more than I did during their introduction in Million Dollar Baby, but I’m happy to say Meade has outdone herself. More than ever, I can so easily visualize Myrna Loy and William Powell, of the Thin Man movie fame, bringing Creighton and Marjorie to life on the silver screen. Like their Old Hollywood counterparts Nick and Nora, it is so much fun watching Creighton and Marjorie needle and poke at each other, because you know their “fights” are rooted in affection and mutual attraction. Meade’s biggest strength is her characters – they are funny and memorable, very real and quirky people that you can’t help but fall in love with. With a stronger, more tightly plotted mystery, engaging characters, rapid-fire dialogue and loads of humor, Ghost of a Chance is a winner. I can’t wait to see what adventures Marjorie and Creighton encounter next!

Love Nick and Nora. I need to try this series.

I've been wondering what I was going to read next. I do believe that question is answered now.

@Juju - I need to have a Nick & Nora film marathon, LOL! I just love this series - hope you get the chance to try it & that you enjoy it as well!

@Michelle - Have you read the 1st book in the series?

Yes, I finished it a few weeks ago. I kept picturing Cary Grant as Creighton, probably because he's British.

@Michelle - Oooohhh, Cary Grant as Creighton is an EXCELLENT choice!! I hadn't gone there at all but now...well that's just brilliant. Love it! :)

Excellent review. This is one of my favorite time periods and I adore a good love triangle!

@Aspiring Novelist - Thanks so much! Be sure to start with the 1st book though - it sets everything up nicely. Since you're a fan of the time period I predict you'll love it. :)

Side note: I LOVE this outfit!

Thanks for the review. I've just put Million Dollar Baby on my wish list at Paperback Swap.

@Cathy - You're welcome, and I hope you enjoy MDB!!