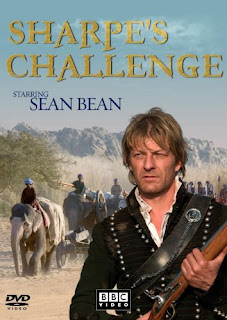 After a few weeks off, Masterpiece Classic returns tomorrow with Sharpe's Challenge, starring Sean Bean. This film aired a couple of years ago on BBC America, but this broadcast marks the first time it's aired on PBS. Here's a bit about the show:


Soldier-adventurer Richard Sharpe (Sean Bean) comes out of retirement to find a MIA officer (his old friend Patrick Harper) and to quash a rebellion in British India. Sharpe faces shifting allegiances, the conniving seduction of Madhuvanthi (Padma Lakshmi, Top Chef) and an explosive confrontation with an old foe. Will this be Sharpe's ultimate challenge? Sharpe's Challenge is based on the characters created by novelist Bernard Cornwell.

If that doesn't convince you to watch, this program features appeareances by Lucy Brown from Primeval and TOBY STEPHENS (!!!). :)
Posted by Unknown at 7:05 PM

Off topic: So I have heard a lot about Merlin lately and tried to record it. For some reason it's giving me a hard time (my new dvr is not very user friendly and it's really different from what I'm used to)... is it worth the effort? I am not even sure you're a fan of the show but you usually seem to know these things.

Toby Stephens is totally droolworthy in it, even though William Dodd is a really nasty piece of work you really don't want to get on the wrong side of. Or any side, to be fair. Still, totally worth watching just for his "English bastards". Squee! And one is also partial to Sean Bean, of course, even if all the characters he ever portrays seem to come from Sheffield...

Thanks for letting me know about this. I must remember to set the DVR!

@Jamie - Merlin is definitely worth checking out! Sorry your DVR is giving you fits, especially since SyFy was nice enough to marathon the entire season 1 yesterday. :/ But season 2 starts Friday, woo-hoo! And season 1 releases on DVD end of April...so you'll definitely have to let me know what you think!

@Traxy - HA!! Your comment about Sean Bean is so true! LOL!!

Yeah, I caught most of the marathon yesterday but I rly hate this dvr. It won't let me set the whole series to record because sometimes the show conflicts with other shows I have recording. I don't want to cancel any of them but obviously Merlin would get chopped in favor of other shows. But when I try to tell it to cancel just the episode that conflicts... it cancels the whole damn series. Eventually I just manually added many of the episodes one by one. So frustrating. I miss my mom's Directv... :(

@Jamie - Oooohh, I feel your pain, I hate DVR scheduling conflicts. Glad you did get to see most of Merlin season 1, though! Hope you enjoy the eps!