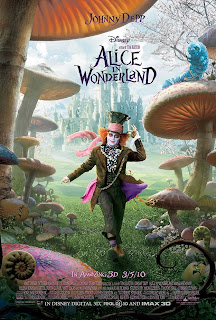 I saw Alice in Wonderland this afternoon, and I absolutely loved it. Every single frame of film in this movie just blew me away. Tim Burton has made several movies that I've liked, but never one that I really liked, if you know what I mean. This one fits the bill. I've never been fond of the Alice story - Lewis Carroll's books never  really captivated me, and the animated Disney film was always one of my least favorites growing up. However, I've grown into a really big fan of revisionist retellings, like Tin Man in the case of The Wizard of Oz, or the SyFy miniseries Alice that aired in December of last year. In the case of this latest version of the Alice story, Alice (Mia Wasikowska) returns to Wonderland over thirteen years after her first visit. You see, she has a destiny to fulfill - killing the Jabberwocky and ending the Red Queen's reign. But first she must navigate the dangers of Wonderland and decide if she has what it takes to be a heroine.

I loved the "real world" frame story Burton presents us with - Alice, surrounded by very conventional people, is expected to marry a gosh-awful fellow named Hamish and lead a very conventional, very safe life. But Alice's father was a man who used to believe at least six impossible things before breakfast, and that sense of wonder, and longing for adventure, is in her very blood. I really, really liked Wasikowska's take on Alice - she starts out rather unsure of herself, but as she finds her footing and her confidence, she learns to handle all of the strange creatures and dangers thrown her way with courage and ingenuity.

Helena Bonham Carter's gigantic-headed Red Queen was hilarious. Carter almost manages to turn the Red Queen into a sympathetic character (really, being sister to the White Queen would've gotten old after about five minutes), but she's too far gone really change, and is a great villainness. I'm thinking Carter is a lock to play Maleficent - given how much I like what Burton's done with the Alice story, I can't wait for his take on Sleeping Beauty, one of my all-time favorite fairy tales. Anne Hathaway was perfect to play the absolutely perfect, beloved White Queen. She takes her acting history playing perfect, princess-y characters (think The Princess Diaries and Ella Enchanted) and gives the White Queen these really funny, over-the-top mannerisms that fit the character perfectly. Her dark eyebrows and lipstick was a little freaky, though - that could've done with some toning down, just sayin'!

It should come as no surprise that my absolute favorite character in the film was Johnny Depp's the Mad Hatter. I don't think you could wish for a better actor to play the crazy guy. :) The Hatter is funny, and over-the-top, and poignant, and brave all at once. It's yet another riveting chance to watch Depp completely lose himself in a role, and I loved every moment of it. The Hatter and Alice are given a really wonderful friendship in this retelling, and I wish it had been given even more screentime. There were moments when the Hatter went all crazy-intense, that he sounded like Captain Jack - loved that. :)

In addition to Martin Sheen as the White Rabbit, this movie is packed with tons of other great voiceover talent. Stephen Fry gives voice to the rather devious Cheshire Cat (LOVED it!), while Alan Rickman voices the Blue Caterpillar. I'm not familiar with actor Paul Whitehouse, who voices the March Hare, but his work was HILARIOUS, and a great companion to Depp's zany Hatter. Imelda Staunton lends her voice to two talking flowers, and Christopher Lee is pitch-perfect and menacing as the voice of the Jabberwocky. Oh, and in the non-voiceover category, it was great to see Tim Pigott-Smith (North & South) in a supporting role as Alice's future business partner, Lord Ascot.

Besides the acting talent, the script, design of the film, costumes, special effects, and music are all superb. Burton's use of color in his films is always one of the most striking things about his work (for me, anyway), and this time is no exception. The color and design of this film fills each frame with eye-popping, fantastic visuals. It will take multiple viewings of this movie on DVD, I'm sure, to really appreciate the depth and richness of this movie. Oh, and Danny Elfman's score is AMAZING! He's created some great work for Tim Burton's movies, but this score has to be my favorite. It sort of as an old-fashioned adventure movie feel to it - lush, full orchestrations with just the right dash of the whimsy and the fantastical. Just shy of two hours long, this movie flies by with never a dull or dragging moment. To sum up, see this movie asap - it's tremendous fun. :)
Posted by Unknown at 6:19 PM

I don't like Alice's stories very much and I've never liked the Disney cartoon, but I really want to watch this version. I'm glad you liked it, it's always nice to hear a good review of something we want to watch!

I've always hated the Disney version of Alice in Wonderland. There was also a version that aired on TV once when I was little that scared the BEJESUS out of me. Anyway, I am very wary of anything AiW-related and will probably wait for this movie to come out on DVD.

Oooh, I want to see this movie! :) I was curious before, but now I'm looking forward to it. (I think we have similar tastes, so I trust your judgement.)

By the way, a few of us RA bloggers are planning something cool. Please email me so I can fill you in and see if you'd like to participate.
armitageblog@yahoo.com

@mrsthorntondarcy - Hope you enjoy this version of Alice. I think it was a fresh take on it that brought a new perspective to the story that really worked for me.

@heidenkind - I totally get where you're coming from - but I think you'll enjoy this one whenever you get to see it.

@Nat - I think you are probably quite right about our similar tastes. :) And I'm looking forward to following the RA blog-fest!

Sounds like a great film! :) Paul Whitehouse is a British comedian, who has done shows like "The Fast Show" and "Harry and Paul", and most recently, "Bellamy's People" and some amusing adverts for car insurance or whatever it was. I know him best from the catchphrase-rife Fast Show. A very funny guy. :)

@Traxy - Thanks for explaining Paul Whitehouse. :) Maybe I'll get to see more of his work someday...