Review: The Swiss Courier by Tricia Goyer and Mike Yorkey 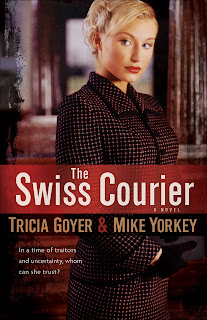 She’s risking her life to save a man she doesn’t know. But whom can she trust along the way?

It is August 1944 and the Gestapo is mercilessly rounding up suspected enemies of the Third Reich after an attempt on Hitler’s life. Gabi Mueller is a young woman working for the newly formed American Office of Strategic Services (forerunner to the CIA) in Switzerland. When she is asked to put herself in harm’s way to safely “courier” a German scientist who is working on the atomic bomb out of enemy territory, the fate of the world hangs in the balance.

Gabi Mueller is an idealistic Swiss-American working in the translation pool at the local office of the recently formed American Office of Strategic Services (forerunner to the CIA) in Basel, Switzerland. She’s happy to do her part, but longs to make a more exciting, significant impact on the Allied war effort. When she’s recruited by her handsome supervisor to participate in an undercover operation, she’s thrilled – but the increased responsibility comes with a price. Committing to work as a spy brings far more personally imminent dangers home than her old desk job. She must shield her family and would-be admirer from all knowledge of her dangerous work. Thanks to Switzerland’s neutral status, the country is a veritable hotbed of wartime intrigue, and carrying a Swiss passport is no guarantee of protection if one falls afoul of the Nazi government just across the border. In Germany, Joseph Engel is a dedicated physicist, driven by a thirst for knowledge. The military and government pressure on Engel and his fellow researchers to produce a “wunderwaffe” (miracle weapon) that will turn the tide of the war in favor of Germany increases by the day, especially in the wake of the failed Valkyrie assassination plot. When an overeager Gestapo officer uncovers the buried truth about Engel’s past, the academic suddenly becomes the most wanted man of the war on both sides of the conflict. Gabi is given the assignment of “couriering” Engel to safety, a job which will require all of her courage and ingenuity in order to avoid the clutches of the Gestapo.

I’ve read a couple of Tricia Goyer’s previous World War II novels, so I was curious to see how this collaboration with Mike Yorkey would play out. The Swiss Courier’s pages are filled with Goyer’s trademark passion for history, with characters testing their faith in the midst of tumultuous times. She also has a real gift for crafting characters that are true to the time period in which the story is set. What sets this novel apart is that it is quite simply one of the most tightly plotted, suspenseful historicals I’ve ever read. In that respect it reminded me of the film Valkyrie (Courier picks up where that film leaves off). Once the clock starts ticking on the unfolding drama, the story doesn’t relinquish its hold on the reader until the mission’s completion. Filled with an international cast of well-drawn characters (including a couple of surprising hidden identities!) and break-neck plot twists, The Swiss Courier is a thoroughly absorbing, suspenseful read. The only drawback is that action made me feel just the slightest bit gypped when it comes to Gabi’s character development – particularly her 180-turn in how she views her boss – but that didn’t detract from my overall enjoyment of the story. Goyer and Yorkey’s contributions are seamlessly blended, resulting in a page-turning novel rich in historical detail.

As a devout fan of World War II-era fiction, I happily now rank The Swiss Courier among my favorites in the genre. Goyer’s first collaboration with Yorkey completely exceeded my expectations, and (in my experience, anyway) fills a niche within my reading about the time period. I loved the glimpse inside wartime Switzerland – the official stance of maintaining neutrality between warring factions lends the story a fascinating dynamic. I also enjoyed reading about how downed Allied fighters were interred in Switzerland for the duration of the conflict – it was an interesting historical nugget that I’ve never seen explored in WWII fiction. It’s also heartbreaking to witness the plight of Jewish refugees denied asylum because of Switzerland’s neutrality – to know freedom, only to have it snatched away by political expediency is an unconscionable circumstance the authors drive home through Gabi’s experiences. Don’t let the female-centric cover fool you – The Swiss Courier is a tightly plotted spy thriller with enough twists and turns and surprise reveals to give a reader whiplash. Here’s to hoping for many more collaborations from this stellar writing team!
Posted by Unknown at 6:05 PM

I really want to read this! The cover caught my eye awhile ago. Your post reminded me of it :)