Review: Sons of Thunder by Susan May Warren 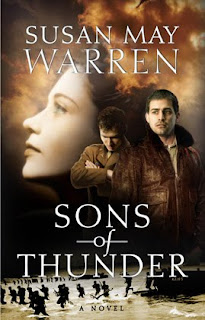 Two brothers love her – but only one can have her heart.

Sofia Frangos is torn between the love of hot-headed, passionate Markos and his younger brother, quiet, intelligent Dino. Markos longs to honor his family, Dino wants to forget the tragedy that drove them from their Greek home to the shores of America. One brother offers the past she loves…the other, a future. Which “Son of Thunder” will she choose? From Chicago’s sultry jazz-era clubs…to Europe’s World War II battlefields…to a final showdown on a Greek island, the Sons of Thunder discover betrayal, sacrifice – and finally…redemption.

Brothers Markos and Dino Stavros lived relatively idyllic lives as fishermen on the Greek island of Zante in the 1920s. Markos, the older of the two, quietly loved the beautiful Sofia Frangos, who worked in his family’s taverna, and dreamed of a future with her. Those hopes were destroyed on the fateful night the Stavros patriarch and oldest son were murdered, and Markos himself was involved in the bloodshed when he killed one of their attackers. Trying to escape the past, Markos, Dino, and Sofia flee to America to start their lives anew, but instead of the sanctuary they’d hoped for, their “fresh start” turns into a crucible that will test their character and threaten to destroy the promises binding them together. Epic in every sense of the word, Sons of Thunder follows Markos, Dino, and Sofia from the gang-ridden streets of 1920s Chicago to the war-torn battlefields of Europe. Gritty and heart-rending, these three passionate individuals are broken and battered by the turbulence of the times they live in, only to discover the sweet promise of deliverance and redemption found in surrender.

I absolutely love it when I read a book and the journey within those pages meet me right where I’m at in my faith walk. Markos, Dino, and Sophia are three very different personalities, bound together by mutually shared tragedy and hardship. Despite the wildly varied paths their lives take, each one of them needs to learn what deliverance looks like in their lives – not something that can be forced or earned or saves them from trouble, but a precious gift that teaches them the true source of strength and deliverance is found in reliance on a never-changing God and His promises. This is probably Warren’s grittiest, emotionally raw, real offering to date. The pain these characters endure and their joy at discovering hope and redemption brought me to tears on more than one occasion. Just when I think it’s not possible for a favorite author to get any better, Warren surpasses herself with Sons of Thunder. This isn’t a preachy novel at all – this is faith and hope finding individuals in their darkest hour, changing their lives forever. It’s one of the best examples of seeing faith lived out in the pages of a novel that I’ve ever come across – spiritual truths are wrapped in compelling, unforgettable storytelling.

Since Susan May Warren is one of my all-time favorite authors, and World War II is the historic time period I love to study the most, this Brothers in Arms series is a dream come true. Sons of Thunder took a bit longer for me to really get into than other Warren novels, but once I found the rhythm of the story it grabbed my heart and refused to let go until the final pages. The novel is divided into thirds, the first section told from the point of view of Markos, then Dino, and finally Sofia. Since the book is basically three novellas strung together by common experience, the narrative can occasionally feel a bit choppy. That is most likely the reason this novel didn’t “grab” me until towards the end of Markos’s section of the story. There’s so much action and emotional highs and lows packed within the pages of this novel, I would’ve been thrilled to see it as a trilogy. Warren presents a compelling, satisfying, life-changing story that left me wishing it would never end. With superb pacing, characters so real they’ll break your heart, and a healthy dose of suspense set against the backdrop of world war, Sons of Thunder is a story to savor, the pages saturated with hope. I can’t wait to read Warren’s next installment in the series!

***My apologies to the author and Litfuse Publicity for being a week late in posting my review for the Sons of Thunder blog tour - life interfered in a big way last week.***
Posted by Unknown at 6:15 PM

I'm sold, from this review and the quotes you've posted on FB. Looking forward to reading this book as soon as it arrives. :)

A Susan May Warren book set in WWII? That sounds right up your alley, Ruth!

The blurb for this one sounds a lot more like the ones I usually avoid, BUT, based on glowing reviews by you and Renee...I'm going to give it a try.

One of my NY resolutions was to start reading books I normally wouldn't glance twice at, so far, I've read 2, and was really happy I did! :)