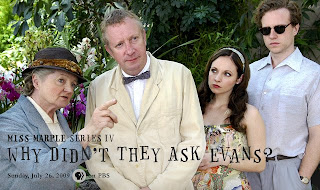 Why Didn't They Ask Evans? is the final installment of series 4 of Miss Marple, and I quite enjoyed it. Haven't read the book (yet), so I'm not sure how it compares to this film - especially since the book isn't a Marple novel - but I'll rectify that situation shortly. :) Here's the story summary from the PBS website:
Bobby Attfield finds a man near death sprawled out on a cliff. His final, enigmatic words — "Why didn't they ask Evans?" On a whim, Bobby and his friend, socialite Frankie Derwent, decide to investigate. The amateur sleuths, along with Miss Marple, uncover several enticing clues — a hotel room key, a pipe and a map with the Savage Castle circled. Getting into the castle under false pretenses, the trio meets a cadre of shadowy characters — the widow of loathed businessman Jack Savage, his two teenage children, a handsome piano teacher, a psychiatrist and his delicate wife. Before long, Bobby and Frankie's playful inquiry turns even more deadly. Amid a backdrop of poisonous snakes and exotic but lethal orchids, will the three decipher the dead man's final words before they are exposed?
This movie is a bit of a Harry Potter fangirl's dream, as Sean Biggerstaff, a.k.a. Oliver Wood (!!), stars as Bobby Attfield, thrust into a dangerous web of intrigue and murder when he discovers a dying man sprawled out on a cliff. I thought he was a cutie in the first and second Potter films (Hey he's only 3 years younger than me! LOL!), but I've got to say he's aged well. Just sayin'. :) Georgia Moffett plays opposite Biggerstaff as his friend and possible romantic interest, socialite Frankie Derwent. I almost didn't recognize her with dark brown hair, but it turns out she played in one of my favorite Doctor Who episodes as Jenny, the Doctor's daughter. She also dated David Tennant - don't know if that's still going on - so by any estimation I should hate her guts (*wink*), but I really liked the spunk she exhibited playing opposite Biggerstaff. It's a lot of fun to watch the way Frankie and Bobby needle each other throughout this film, always dancing around their attraction to each other. (BTW, I just have to point out how adorable it was when Bobby gets dressed up in a tux and rides his bicycle over to Frankie's party, only to leave without announcing his presence - that was such an "awww" moment. :)
This film also has a 2nd Potter connection - Mark Williams, who plays Arthur Weasley, plays Claud Evans, orchid aficianado, who meets a rather grisly end. And then there's a 3rd, more distant Potter connection - Rafe Spall, son of Timothy Spall - a.k.a. Peter Pettigrew - plays the mysterious piano playing Roger who vies with Bobby for Frankie's affections. This brings up an interesting point - why on earth would Rafe Spall be a serious contender against - well, ANYONE else?! I don't get it. *rolls eyes* Oh, and I can't forget to mention Richard Briers as Wilson (a sort of butler I guess??). Briers is a veteran of several Kenneth Branagh films, including Henry V, Much Ado About Nothing, and Love's Labours Lost.
Now, I enjoyed this episode, but I have to admit it gets a little looney towards the resolution. Not only does the reveal go on forever, but as far as Agatha Christie goes the whole China subplot seems more than a little far-fetched. I could be going out on a real limb here but I think I'm going to discover the film rewrites a great deal of the original novel. In fact - this may be a case where it turns out that inserting Miss Marple's character into a non-Marple novel actually takes away from the punch of the story. While I enjoyed Julia McKenzie's portrayal of Jane Marple in this episode, and by the end of the ep I thought she interacted quite nicely with Bobby and Frankie, her presence wasn't absolutely necessary. Bobby and Frankie had a kind of Tommy and Tuppence chemistry, a whole lot of fun to watch on their own.
Book review coming soon. Overall, series 4 of Miss Marple has been enjoyable - not quite up to the standard set by the Geraldine McEwan years, a bit hit-or-miss, but there are enough enjoyable moments that I hope a series 5 is commissioned. I'd hate to see Miss Marple disappear from the Masterpiece Mystery roster. :)
Posted by Unknown at 7:49 PM

sean biggerstaff (i giggle everytime i see his name) is totally hot. i really hope he comes back for a cameo in Deathly Hallows

@Deborah - You and me both! That would be awesome if he came back (really I want to see all the characters that have appeared but dropped off the radar make appearances!).

i read somewhere, either the harry potter wiki or one of the HP sites, that the director wants everyone they can get to come back. although i'm not sure how they are going to handle the characters who have multiple people playing (ie. which Angelina Johnson would come back) or if Crabbe is being jailed for weed, how will he die in the fire in the room of requirements?

btw i FINALLY saw Half blood prince this past weekend. I SOBBED. but mostly b/c i know what will happen during Deathly Hallows ie. anything dealing with snape and dumbledore crying during the cave scene

Excellent points about multiple actors playing the same character...however, with certain characters, like Crabbe, his death might not even figure into the seventh movie enough to where the filmmakers would call it out. There's no telling how they'll try to write it all in!

How funny. This episode really was like a Harry Potter reunion. I recognized Mr. Weasely--I mean, Mark Williams--immediately, but Biggerstaff and Spall went right over my head. Biggerstaff is totally adorable, though. :)

I enjoyed the first part of the ep, although I thought Frankie was INSANELY annoying. I wanted to slap her when she just cut Miss Marple off and snatched the map out of her hands. I was all like, "Being rude to Miss Marple?? Who the hell do you think are?!" LOL

Anyway, the first part was quite entertaining with all the weird awkwardness going on in that house. There were times when I lawled. But then it takes a descent into wtf-ville. I think my PBS station cut out some parts, because the reveal didn't explain what Alice and the piano player had to do with the murders or why they were trying to kill that older woman. Luckily, I caught the very very end while I was on vacation, and on that station they did explain it. And the explanation was really out there.

This definitely wasn't the best Marple ever, but I'm still sad this is the last ep. :( I hope that cute lute player guy is still on Inspector Lewis.

It does annoy me a bit to have Marple stuck in non-Marple stories. :-) To me the worst was the annihilation of "By the Pricking of my Thumbs", where she took over for Tommy and Tuppence. That episode annoyed me to bits...T&T are my fave AC detectives, and I hated that they made Tuppence an alcoholic. Anthony Andrews as Tommy made up for it, though. :-)

They did rewrite quite a bit of this episode, which was a teeny bit annoying. :-)

@Alexandra - I know what you mean. Sometimes It works better than others. Personally I liked the film version of "By the Pricking of My Thumbs," but the book is strong enough as is without Marple. *sigh* I guess Tommy and Tuppence just don't have the "brand power" of a Marple or a Poirot. ;) And I agree, the rewrite of the end of this story was INSANE. Thanks for commenting on an old post, it was fun to have an excuse to revisit it. :)