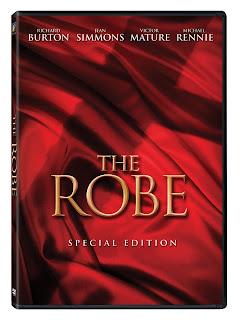 Just in time for the Easter, 20th Century Fox offers up a newly-remastered, special edition release of the 1953 Biblical epic The Robe on DVD and Blu-Ray. This is a review of the DVD release. Based on the novel by Lloyd C. Douglas, The Robe is the story of Marcellus Gallio (Richard Burton), a Roman tribune who is sent to Palestine as a punishment for antagonizing Caligula (Jay Robinson) and threatening to rival the volatile emperor-to-be for the affections of the beautiful Diana (Jean Simmons). He arrives just in time for Passover, and within days he is ordered to oversee the execution of the recently tried and condemned teacher Jesus. After the crucifixion, the soldiers cast lots for Jesus’s clothing and Marcellus wins the robe. Acquiring the robe sends Marcellus into a downward spiral of fear and paranoia, and fearing he might destroy the garment, Marcellus’s slave Demetrius (Victor Mature), interested in Jesus’s message, steals the garment. Marcellus begins to believe the robe itself is cursed, and recalled by the emperor, he reports on Jesus’s teachings and followers – it’s a new doctrine of freedom that the emperor finds threatening. Marcellus returns to Palestine to find and destroy the robe and to ferret out the seeds of rebellion that might grow with the spread of this new “Christian” faith. As Marcellus gets to know Jesus’s followers, he finds his life transformed by the truth by the life and legacy of the man whose execution he oversaw. Becoming a believer brings the power of the Roman political establishment to bear against Marcellus, and soon he must decide what he’s willing to sacrifice in order to follow his new spiritual king.

When given the chance to review this new DVD release of The Robe, I jumped at the opportunity – after all, it’s what you might consider the “grandfather” of all Biblical epics. It’s the first film that was released using CinemaScope technology, which completely changed the way films could be conceptualized and viewed. Suddenly there was nearly twice as much space available in which to visually tell the story. Long before widescreen was the standard, The Robe paved the way by taking every advantage of the new technology. Every frame of The Robe is filled with eye-popping color, detailed sets, and gorgeous costumes. Thanks to a superb remastering job, The Robe has probably never looked (or sounded) better. The DVD is padded with a handful of special features, including a brief introduction by Martin Scorsese, an isolated music track highlighting Alfred Newman’s sumptuous score, a commentary track with David Newman and three film historians, and still galleries. Personally I found the thirty minute The Making of The Robe featurette to be the most interesting. It gives an excellent overview of The Robe’s ten-plus year journey to the big screen, touching on the filmmakers, studio changes, casting process, and the film’s legacy. It also gives the film some historical context by discussing how the Black List, McCarthy trials, and the general politically volatile climate of the time as a whole informed the way the story was brought to the screen.
If you’re a fan of big, splashy epics The Robe is definitely worth checking out. Sure, it’s not without its shortcomings – the dialogue is occasionally a little clunky and the whole introduction of the robe as a sort of talisman comes off a bit contrived – but it’s an absorbing film, especially fascinating to view in light of how it informed later film classics like The Ten Commandments and Ben-Hur. The real strength of the story is in Marcellus’s transformation from a hardened secularist to a man of faith. That journey is handled with a deftness and grace that makes his story timeless and authentic over fifty years after the film was made. And if you’ve only seen the film, it’s worth checking out the novel which is still in print. It’s highly readable, and over the course of 500 pages Marcellus’s character and faith transformation are given even more room to develop and grow.
Posted by Unknown at 3:22 PM