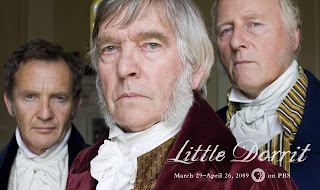 I have to admit, last night’s installment of Little Dorrit dragged just a little for me. I think it’s because this segment of the story is very heavily focused on Mr. Dorrit’s mood swings and mental decline and the Merdles and their questionable investments. Amy (Claire Foy) really felt relegated to the background, and I suppose since she is by far my favorite part of the show and the most sympathetic character (tied with Arthur, of course!), I didn’t “connect” with the action on-screen as well as I have in previous weeks. I’ve said it before and I’ll say it again – I am really looking forward to watching this show in one marathon sitting, without PBS deciding where to break the episodes. Plus, I cannot stand Mr. Dorrit. I can apparently tolerate him for about ten seconds now before I’m ready for him to DIE ALREADY and disappear from my television screen.

Anyway, without further ado here’s the summary of episode four from the Masterpiece Classic website:

As Mr. Dorrit and Mrs. General get closer, a dismayed Fanny Dorrit schemes to remove herself from the situation by pursuing Edmund Sparkler, stepson of the famed banker Mr. Merdle. Her one obstacle is Mrs. Merdle, entirely opposed to such a union.

Mr. and Mrs. Meagles receive a disturbing visit from Henry Gowan's mother. Concerned for their daughter Pet's reputation, they venture to Venice to be with her.

Arthur Clennam runs into Rigaud at the House of Clennam and immediately wonders about his intentions. Soon, Arthur receives the shocking news from Mr. Pancks that Rigaud has vanished, and Mrs. Clennam is now under a cloud of suspicion. 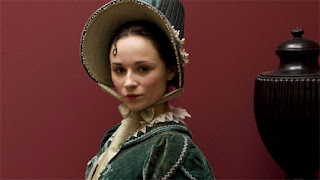 One of the bright spots for me about the Dorrit family’s extended stay in Europe is that it’s afforded Fanny Dorrit (Emma Pierson) the opportunity to repeatedly steal the spotlight. She’s definitely got some rough edges, and the way she treats Amy occasionally makes me cringe, but at the end of the day I have to say I’ve really been surprised by how much I like her character. Fanny has a lot of moxie and sass, and while I certainly don’t necessarily approve of the means Fanny uses to attain her goals, I have to appreciate the way she’s not going to go down without a fight. And while she’s nauseatingly pretentious, I like the occasional flashes of sisterly affection that shine through in her interactions with Amy. Plus, she’s just really, really funny.

I also really like how Amy and Pet Gowan (nee Meagles) have become friends. When Pet (Georgia King) was introduced in episode one, I took an instant dislike to her because she seemed 1) vapid and silly and 2) was Amy’s rival for Arthur’s affections. However, being stuck in a marriage with a selfish, immature husband has seriously done wonders for her character. Plus, I like the fact that Amy genuinely cares for her – she’s not just trying to be Pet’s friend because she knows Arthur’s carried a torch for her, she really cares about her well-being.

Speaking of the Gowans, I’m still confused about why Miss Wade sent Rigaud to stalk them in Italy. While this episode took several steps forward as regards the Rigaud/blackmail mystery, particularly in how it relates to the House of Clennam, there are still so many loose threads, I’ve yet to figure out how they’re all connected. I have to give kudos to Andy Serkis for making Rigaud creepier and more inexplicable by the week. I’m eager to have all of Mrs. Clennam’s secrets revealed. I have to say though, that even though Rigaud is a formidable foe, I don’t have a great deal of sympathy for Mrs. Clennam. When Arthur goes to visit, expresses his concern for his mother, and his desire to “heal the breach” as it were and is soundly and rudely rebuffed, let’s just say I was less charitable in my thoughts toward Arthur’s dear mama. 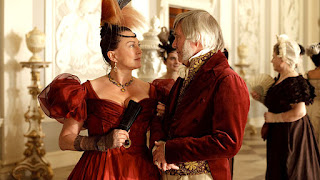 Last night’s episode finally started to give us more information about Mr. Merdle (Anton Lesser) and his legendary investment skills. Merdle strikes me as a guy who knows his success, his bank, is quite literally a “house of cards” apt to topple at any moment – but he’s so far in with his shady dealings that he either doesn’t care to turn back or doesn’t know how. I’m inclined to say his personality weighs towards the former category after watching the smarmy way Merdle convinces the clearly incompetent Mr. Dorrit to entrust him with his fortune. I was thisclose to feeling sorry for Mr. Dorrit (then I remembered how ANNOYING his whining is).

This installment to me was a giant set-up for the payoff to come with next Sunday’s conclusion. That’s what I hate and simultaneously love about this Masterpiece serials…I get absolutely hooked but I hate, hate, HATE waiting a whole WEEK between episodes. The highlight of last night was watching Arthur read Amy’s letters (so sweet – and yes, I know I’m a sap!), and witnessing Fanny’s shenanigans. I cannot wait to see this story conclude next Sunday night – and then I’ve got to say, I’m looking forward to the DVD release and spending a lazy Saturday afternoon having a Little Dorrit marathon.

Click to read my reviews of episode one, episode two, and episode three.

Catch up on episodes of Little Dorrit online at the PBS website.

Pre-order the Little Dorrit DVD from Amazon.
Posted by Unknown at 4:57 PM

Did you see that Robin Hood Season 3 is on YouTube now? Is season 3 the new season? I have no idea.

RYC~Drood is insanely long. But so far I've actually been enjoying it quite a bit, and it doesn't feel like it's dragging at this point. It may take a loooong time until I review it, though.

Wait... maybe it wasn't season three, but it was definitely the latest season, since they mentioned it just started in Britain.

@heidenkind - Yes, season 3 is the new season of Robin Hood, and I've managed to watch the first four episodes on YouTube. I am SO FRUSTRATED with BBC America and their unwillingness to announce when they will air the new episodes!!

Hey thanks for stopping by, I didn't know you were on blogger either! LOL!!! Great layout!!!

Staying up another late night so you get another comment. ;) No surprise, I LOVED Little Dorrit (how could I not? My younger daughter's name is Amy) and I agree 100% with your take on Fanny. She really grew on me throughout the series. Amy is good, but she's just SO GOOD, while Fanny is really more BFF material. If she lived in 2011 (and was, y'know, real) I feel like Fanny would have a really snarky fashion/gossip blog like Go Fug Yourself. She's way more FUN to know than dear demure Amy. (Also, Emma Pierson turned out to be really pretty without that crazy makeup on!)

I haven't readthe book so I don't know if Dickens wants us to like Fanny or not. But after I finished the series, I wasn't terribly interested in Arthur and Amy's post-story life but I couldn't stop thinking about Fanny and Mr Sparkler. If I had the time I would totally write some fan fiction about them, because what an interesting marriage. She mainly married him to prove a point to Mrs Merdle (and she def. gets the upper hand by the end!) but Edmund, for all his foppishness, is actually a decent person. I can't see him treating him as Flintwinch treated Affery, can you? I would love to know how they handled the reversal of fortunes - probably better than Mrs Merdle would since both Fanny and Edmund have at least worked at some point in their lives. And I like to think that Fanny would actually come to love or at least appreciate Sparkler - motherhood would probably mellow her out, don't you agree?

On a completely unrelated note, I learned from the Little Dorrit DVD bonus features that the actor who played Sparkler was actually completely funny and adorable. IMDb says he was in 'Marie Antionette' and 'Bright Star' though I didn't notice... may be time for a re-watch!

You raise some fascinating questions about Fanny and Mr. Sparkler's post-Little Dorrit lives. There is definitely the potential in that relationship that they would have a very strong marriage - it would be fun to hypothesize about their futures! :)