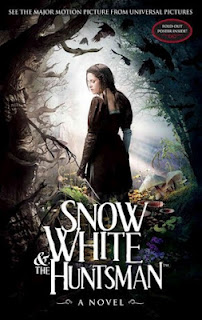 Ten years ago, the stunning and vengeful Queen Ravenna murdered her king the same fateful night she married him. But controlling the  now desolate kingdom has begun to take its toll on the evil Queen. To keep her magic and beauty from dying, she must consume a heart that is pure. And the only one that has been under her cruel watch all along belongs to the king's daughter.

Ravenna calls for the imprisoned Snow White, but the young woman escapes from the castle and seeks refuge in the Dark Forest. Because the forest is enchanted with magical flaura and deadly fauna, the Queen sends for the only man who has ventured into the woods and survived: a tortured Huntsman called Eric.

With his hope long forsaken, the Huntsman agrees to bring back the girl. But when Eric finds his prey, he hestitates. Will he kill her?

Or will he train her to become the greatest warrior the kingdom has ever known?

Snow White & the Huntsman was one of my most anticipated films of the summer, and a theater-going experience that left me with decidedly mixed feelings. I loved the visuals and the hints of a unique and fresh take on the Snow White story thanks to charismatic performances by Charlize Theron as Ravenna and Chris Hemsworth as the Huntsman. But overall I felt the film was decidedly lacking in the plotting and character development areas -- with so much potential only partially realized on-screen, I was left wanting more -- and with that aim in mind I decided to investigate the movie novelization. Film novelizations are very iffy propositions, more often than not a slap-dash attempt to capitalize on a movie's popularity. For the most part this SWATH adaptation is a mediocre work of fiction, falling into the same traps as its filmic inspiration -- too enamoured with Snow's world instead of the story's characters. But at best this slim volume offers some interesting additional tidbits of insight into the Huntsman and the Queen, and leaves me hoping for a more character-driven, satisfying second outing, if/when the SWATH sequel comes to pass.

The novelization offers some background information on Ravenna and her brother Finn -- apparently her coup against Snow's father was in retaliation for his attack on her family. Interestingly enough in the film there is no sense that Snow's father was guilty of this crime, no concept of a blood-feud, but it does add an interesting contextual shade to the Snow/Ravenna relationship. The novelization also (thankfully) white-washes at the least the incestuous overtones between Ravenna and her brother Finn, explaining away their almost "mystically" close relationship as a result of their mother's powerful curse.

The best (and I used that term loosely) aspect of this novelization  is in the increased depth and insight it brings to bear on the characters of Snow White and the Huntsman (the latter is actually given a name -- Eric) and their relationship. Thanks to having the visual of Chris Hemsworth as the Huntsman firmly ingrained in my imagination, I positively relished any extra nugget of insight into the Huntsman's character, background, and view of Snow White (yes, I am a SAP). :)

While Snow and the Huntsman fare the best in the novel, William is white-washed into a bland, barely-there supporting role (he fares much better in the film thanks to Sam Clafin's energetic performance). I think part of the issue is the fact that both Snow and William are seventeen in the book, and while watching the film I reckoned them both a (slightly) more mature early twenty-something. The story's fascination with Snow-as-savior fares marginally better here, in part due to the fact that since most of the novel is told from her point-of-view, we are a little more invested in seeing her "rise to the occasion" to vanquish Ravenna and reclaim her throne.

As novelizations of scripts go, this one does a decent job of translating the SWATH story to the page with adequate if uninspiring prose. It's a quick, fluffy read, and while it does add a few interesting details that expound on the film (most notably, perhaps, there is no ambiguity as to who Snow White favors romantically -- and in this case I couldn't agree with her more!), but like the film that inspired it this is a story that is more concerned with style and world-building than character substance. Hopefully some of these issues will be rectified in the script for SWATH 2...I dearly hope so. The Huntsman deserves it. :)

AND just so we can all keep focused on what's really important here, how about a picture of the Huntsman demanding a better script for the next film? 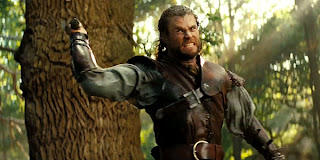 My sis and I went to see the movie today and I have exactly the same feelings as you. The world was perfect; I loved the forest scenes, the fairies were awesome, the queen was evil, it was wonderful. But, the character development was lacking, and the Snow White/Huntsman relationship led me to a "that's it?" moment as the credits rolled. And the whole love triangle with William was not completed. Argh, I hope there's a second one. Is there news of a second one being made? That'd be great.

How does one get these novelization jobs? I'd do a kick-ass job at that. ;)

I saw this the other day and almost bought it but then didn't. Perhaps I will yet. :-)

I haven't seen the movie yet. If I do it will only be to see the forest and the Huntsman 8-D

@Jennifer - Glad to know I'm among like-minded SWATH viewers. :) The second film has been announced, but as far as I'm aware a script is still very much "in the works."

@Tasha - I would LOVE to know. We should co-author one, haha!

@Rissi - It helps with some of the film's deficiencies. Helps...but doesn't quite fix. :)

@Miss Jack Lewis Baillot - Those are the two absolute best reasons to se the movie. :)