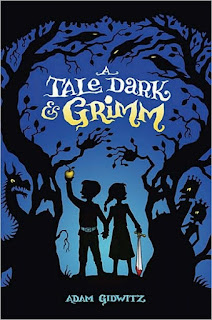 Warlocks with dark spells, hunters with deadly aim, and bakers with ovens retro-fitted for baking children lurk within these pages.

But if you dare,

Follow Hansel and Gretel as they walk out of their own story and into the wilds—where magic, terror, and a little bit of humor shine like white pebbles lighting the way.

Come on in. It may be frightening, and it’s certainly bloody, but, unlike those other fairy tales you know, this one is true.

Once upon a time, you see, fairy tales were awesome.

What if the fairy tales we all grew up with were real? It's a familiar question thanks to the recent popularity of television shows such as Grimm and Once Upon a Time which that take the tales many of us loved as children and grounds them in the present-day reality. The original Brothers Grimm tales were more often than not dark, scary, bloody, and violent -- stories that by today's standards are often deemed unacceptable for children. With his twisty, imaginative debut Gidwitz seeks to reclaim the imaginative power of the original fairy tales, reminding readers of just why these tales hold such a timeless, imaginative appeal. In A Tale Dark & Grimm, Gidwitz seeks to set the record straight about the true story Hansel and Gretel -- there's so much more to their experiences than an edible house and nearly getting turned into a witch's supper. Pulling no punches, Gidwitz follows Hansel and Gretel in their quest to come to terms with childhood, parental disappointment, and growing up, enriched by timeless Grimm classics that have inspired and fueled the imagination of countless generations navigating the murky, danger-filled waters leading to adulthood.

Opening with Hansel and Gretel's birth in the Kingdom of Grimm, Gidwitz sets the record straight regarding their birth -- they were in fact the children born to the king and queen of "Faithful Johannes" fame, who lose their heads when their parents sacrifice their children in order to save a loyal servant. Disturbed -- and rightly so -- by the murderous tendencies of their parents, Hansel and Gretel run away from home in search of parents less willing to axe their offspring. Along the way they wander through the tale that bears their names (edible house and child-craving cook included), "The Seven Swallows" (a variation on "The Seven Ravens"), "Brother and Sister," "A Smile as Red as Blood" (a variation of "The Robber Bridegroom"), and "The Three Golden Hairs" (also known as "The Devil with Three Golden Hairs"). Each adventure tests Hansel and Gretel's bravery and endurance, leading them to a crossroads -- the point where they must decide that in order to achieve the future they desire, they first must return home to deal with the demons of their past.

The adventures Hansel and Gretel surivive in Gidwitz's debut are from, for the most part, lesser known fairy tales -- lesser known, arguably, because they are decided un-PC by today's standards. Stories like "Faithful Johannes" and "The Seven Ravens" are decidedly darker in tone and content than the more famous stories white-washed by Disney and the like for public consumption. Gidwitz retains the violence (hello, losing your heads!) and darkness (trips to hell) of the original fairy tales, interpsersing commentary from a hilarious narrator (very much in the vein of Lemony Snicket), urging those of a squeamish nature to close the book and run. It's a shame that the original Grimm stories are perhaps discovered only after a person has been introduced to a more "sanitized" retelling, because the whole delightful purpose of folk and fairy tales, in all their wonderful extremes, was a way of teaching one how to live -- cautionary, hopeful, adventuresome tales that understood life is hard but worth it.

In his delightfully snarky, entertaining debut, Gidwitz understands the purpose of fairy tales in a manner in which most of society today has arguably lost -- that "to find the brightest widsom one must pass through the darkest zones. And through the darkest zones there can be no guide. No guide, that is, but courage." It's a study in the resilience of fairy tales, the power of childhood imagination, and an unexpected picture of grace -- underscoring that moment when, as children, our parents become human and less than perfect, and how in extending the grace of understanding that life is hard, but worthwhile, a new generation rises up and the circle begins anew. I'm thoroughly looking forward to Gidwitz's follow-up, In a Glass Grimmly, releasing this September.
Posted by Unknown at 4:49 PM

I've been wanting to read this but haven't been able to get my hands on a copy. :)

@Juju - Thanks! I love the cover -- and there are like illustrations at the beginning of each chapter! :)

I really need to read this! I have read a lot of the Grimm stories but always find myself drawn to those featuring princesses which do tend to be better known. I think I would have a lot of fun with this twist on some of the lesser known tales.

@Bookworm1858 - I think society has a whole has just conditioned us to gravitate towards the "princess" tales -- and I'm not out to knock that as I love them too. But if you're interested in a fun intro to some of the lesser-known works, this might be right up your alley. :)