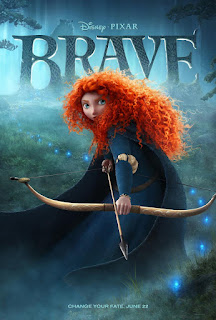 Brave is the latest release from Pixar/Disney, a stunningly-rendered fairy tale of a film. Set in 10th-century Scotland, Brave is the story of Merida (Kelly Macdonald), a princess in the kingdom of DunBroch, the only child of King Fergus (Billy Connolly) and Queen Elinor (Emma Thompson). Merida is as beloved as she is feisty and independent-minded (the latter much to her mother's chagrin), the latter quality given a life-changing outlet when, on one birthday during a hunting party, her father gives her the gift of her own bow and arrows. The celebratory mood is interrupted when their camp is attacked by Mor'du, a fearsome and legendary bear. The royal family escapes, but during the battle Mor'du robs Fergus of one leg, giving rise to family legend and a promise to one day kill Mor'du and avenge the loss of limb.

Years pass, and Merida is now a graceful young woman of (to her mother's mind) marriageable age, older sister to three incorrigible and hilarious brothers -- Harris, Hamish, and Hubert. Merida barely tolerates her mother's lessons in royal decorum, living for the moments when she can escape the castle on the back of her beloved horse Angus and ride and shoot to her heart's content. Elinor doesn't understand why her daughter is so reluctant to accept her fate and the behavioral rules and expectations that brought Elinor to where she is today. For her part, Merida cannot understand why her mother is so hide-bound by tradition, why she cannot see that she isn't her mother and, if she has anything to say about it, never will be. Thus, it's the ages-old conflict between a parent and child that lies at the heart of Brave -- and that being said, it could be argued that this is both Pixar's safest film (in how it steps into traditional Disney "princess" territory) and perhaps most relatable film (in how it addresses parent/child relationships). 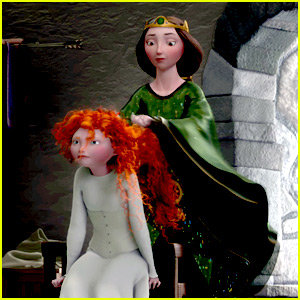 Merida has barely tolerated her mother's tutelage, and is so absorbed in bucking tradition that she is shocked when her parents break the news that at the upcoming clan gathering, the lord of each clan will present his son to compete for the honor of Merida's hand in marriage. But Merida sees a loophole in her parents' plan -- the eldest of each clan will compete to determine Merida's fate, and so she choose her strength -- archery -- as the method of competition. When Merida steps onto the archery green, breaking years of tradition to seize her own fate, she sets in motion a chain of events that threatens to rupture her family and destroy the kingdom. Events that will test the headstrong Merida's mettle and force her to look deep within to find the courage and bravery to make her own destiny.

I saw Brave in 2D, and once again -- as per the norm with Pixar films -- I was completely blown away by the film's artistry, gorgeously rendered on-screen. The rich greens of the Scottish highlands, the blues of the sky, each tendril of Merida's untamed mass of red hair, all is fully realized on-screen, so richly and completely rendered that it seems as though you could step into the world of the film. From the shimmering fabric of Merida and Elinor's gowns to each character's expressive eyes -- I hope, oh how I hope that I never lose my wonder over this type of filmic artistry. And when it is coupled with strong characters and compelling storytelling, so much the better. 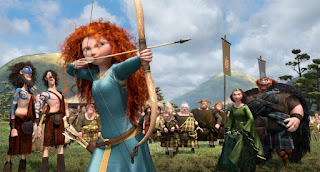 Merida's "unseemly" display at the archery competition brings the simmering conflict between mother and daughter from a spark to a full-blown flame. And this is part of the genius of Pixar's storytelling -- no matter what characters are used as vehicles (human or toy), these filmmakers are able to distill human relationships to their essence, bringing the raw emotional truth of human experience to life on-screen. What person cannot point to some instance of conflict between themselves and one or both parents? The rupture of Merida and Elinor's mother-daughter bond is extraordinarily painful to watch because it feels so real, bringing to life the terrible truth that we oft-times have the greatest power to hurt those closest to us.

Enraged at the fate her parents -- particularly her mother -- are trying to force upon her, Merida determines to become mistress of her own fate. Wandering into the woods she follows the blue will-o-the-wisps to a witch's cottage -- only the witch in question (voiced by Julie Walters), is reluctant to own her identity as a sorceress, preferring to masquerade as a prolific woodcarver. It was easy to see the erstwhile Molly Weasley in the character of the witch, and Walters' vocal performance married to the visuals is a comic joy to watch. When Merida convinces the witch she can pay for her services, she requests a spell to change her mother so she can be free. It's a telling moment, brilliantly executed that reveals the teenage Merida's selfish certainty that there is absolutely nothing she can learn from her mother's experience. 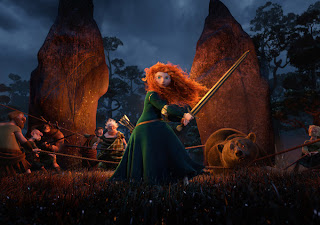 Merida's impulsive, selfish request unleashes a spell that threatens to not only rupture her family permanently, but threatens the future of the entire kingdom. With the future of her world hanging in the balance, Merida and her mother embark on a quest to undo the thoughtlessly conjured spell and repair a fractured and precious familial bond before the curse becomes irreversible. I loved the scenes that follow, where Merida and Elinor come to an uneasy truce of sorts, and then re-learn to appreciate and enjoy each other's company, and -- most critically of all to this storyline -- learn from each other's experiences, and recognize the value within. The script gives equal weight to Elinor learning to hear her daughter and see her perspective, while Merida learns to appreciate her mother's wisdom and experiences. Like all parent-child bonds, the delicate dance of learning balance -- of what to take forward, and what to release, coupled with one's own experiences and preferences -- is critical, and Brave is a very honest exploration of the oft-times tumultuous, but universal, life experience.

This is a beautiful film with lots of heart, following in the Pixar tradition of appreciating and holding sacred the bonds of family and friendship. I loved the humor in the film, especially the scenes involving Merida's rambunctious younger brothers -- they were hilarious! And the scenes where Fergus and his fellow clan leaders jockey for power and position are action-packed but underscored with a strong vein of good humor, particularly when Elinor and Merida in turn manage to "calm the storm" with little more than a simple regal look.

As I've mused on the film for the past few days, it's power as a beautiful story of family has been reinforced in my mind. Merida and Elinor's relationship is perhaps one of the most genuine and honest, accessible explorations of the ups-and-downs of mother-daughter relationships I've ever seen on-screen. The tumult of their relationship is punctuated by moments of, for lack of a better term, violence on-screen when frustrations reach a boiling point. The emotional impact of those scenes is as powerful as honest as the gradual detente mother and daughter reach through near tragedy and danger, renewing an appreciation and resolve in each other to listen, learn, and share their hearts.

Supported by a beautiful score from Patrick Doyle (one of my favorite composers) -- seriously, it's gorgeous -- highlighted by tin whistles, fiddle, and harp -- Brave is another Pixar winner. At first blush, while I thoroughly enjoyed the fast-paced, humor and action-filled storyline, I felt the movie to be wanting ever-so-slightly -- and I think that is because the "princess-avoiding-arranged-marriage" plot felt very familiar in a Disney fairy tale-ish kind of way. But though it utilizes the familiar princess storytelling trope, Brave is a finely crafted tale of the complex, complicated bond that exists between mothers and daughters.

If you've seen the movie I'd love to hear your thoughts! I've attempted to leave this post somewhat spoiler-free, which is highly unusual for me, LOL!
Posted by Unknown at 1:51 PM

I haven't seen it yet. But I will soon. I skimmed the review and appreciate the lack of spoilers and it's good to know you enjoyed it. I have every intention of falling in love with the movie :)

I've already done so with the singer from one of the trailers, Julie Fowlis. I bought the CD that has that song it.

Great review. :) I'm dragging my parents to see this sometime over the next couple of days, and I can't wait!

{Also super-excited about finally getting to see The Artist! I'm picking up it and Mirror, Mirror on DVD tomorrow.}

I'll definitely see this one - it sure looks cute but I'll just go for the DVD. (Gotta' see the new Bourne movie - that takes priority! ;-D) Mom and I saw this trailer and were both like, "aw! How cute does that look!?" I am not a devoted Disney/Pixar fan but Cars was cute.

Oh! And @Kristin: I am so exited to be getting Mirror Mirror, too. :-)

@Lori - You are one of the friends who came to mind as I watched this one, Lori -- I think you'll enjoy it. Can't wait to hear your thoughts! Julie Fowlis's vocal work during the film was lovely -- I may have to look into downloading some more of her work!

@Rissi - I totally get the prioritzing thing -- but this one IS gorgeous on the big-screen! Just sayin'! :) (And enjoy Mirror, Mirror!)