Review: Wolves Among Us by Ginger Garrett 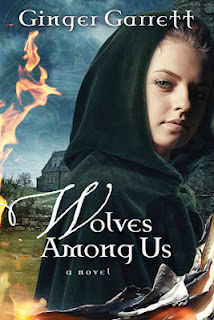 Dinfoil, Germany, 1538. When a double murder stirs up festering fears, the village priest sends for help. But the charismatic Inquisitor who answers the call brings a deadly mix of spiritual fervor and self-deceptive evil. Under his influence, fear, guilt, and suspicion of women take a deadly turn. Pious and heretic alike become victims of witch-hunting zealots. In the midst of this nightmare, a doubting priest and an unloved wife -- a secret friend of the recently martyred William Tyndale -- somehow manage to hear another voice...and discover the power of love over fear.

Wolves Among Us is a powerful examination of a deeply troubling and unsettling chapter in church history -- the medieval witch hunts, which saw thousands of women burned alive, many of them believers, all of them targeted by virtue of their womanhood. Feared, denied, reviled, and judged by the very institution that should have offered them succor and refuge, Wolves is a searing examination of the danger and tragedy that can come when uninformed fears, prejudices, and half-truths are proclaimed as as gospel, and conversely, the freedom that comes when one dares to seek a personal relationship with the God who longs to whisper His truths into our hearts, if only we let Him in. Garrett introduces readers to a world perhaps not so different from our own, where lies are proclaimed as truths and ignorance allows them to flourish. Two vastly different characters provide the entrée to this world, where a horrific double murder brings a small German community to the crossroads of faith and fear. The first, Father Stephen, is a well-meaning but frustratingly blind priest who unwittingly unleashes a wolf among his flock. With more confidence in the human dictates of the church than in his own relationship with the God he proclaims from the pulpit, Stephan is faced with the opportunity to become a true shepherd through the fire of unfathomable persecution. Mia, the wife of the town sheriff, is lonely and unloved, a pariah among the town's women, allows her fears to define her life and her faith. When prejudice and bloodlust masquerade as justice, can two doubters find the courage to stand for life-changing truth?

Wolves was originally intended to be the third entry in Garrett's Chronicles of the Scribe series (following In the Shadow of Lions and In the Arms of Immortals). Somewhere between the publication of Immortals and Wolves, the decision was made to retain the basic plotline (16th-century witch hunts) and eliminate the modern-day framing device utilized in the Scribe novels. While the framing story was a unique and innovative way in which to show modern women experiencing the awakening of previously unknown history at pivotal moments in the Middle Ages, Wolves is just as strong -- if not stronger -- than its predecessors in the case it makes for knowing the heart-breaking, empowering sacrifices our ancestral sisters in the faith made so that we can enjoy the freedoms we do today.

Garrett has a gift for illuminating the dark periods of history, for bringing times that seem, on the surface, so foreign to modern sensibilities to life with her vibrant prose. Wolves is a rare novel, one that is simultaneously engrossing, uncomfortable, enraging, and heart-breaking. This is challenging fiction that holds a mirror to its readers demanding honesty and self-examination, brutally honest in its exploration of the role of women vis-a-vis faith, both personal and corporate, and in the church. On a superficial level, it would be easy to dismiss Mia's story as a fiction, and that is both the danger and genius of a novel such as this. Garrett's carefully crafted characters are authentic and true to the time in which they lived, and Mia's repressed nature seems particularly untenable by modern standards. But at the same time their faith struggles, the questions they grapple with are timeless and still oh-so-relevant today.

William Tyndale and his "forbidden book," a translation of the scriptures from the Latin so they could be read by the average man and woman, is the thread that ties Lions and Wolves together. Taken together these novels are powerful, humbling reminders that the gift of reading the scriptures, of seeking God without the "aid" of a sanctioned intermediary -- these were gifts paid for in blood, treasures that are too often taken for granted. When darkness seems overwhelming, at its most powerful, Wolves is a call to stand for truth, a reminder of who we are in Christ and more importantly of who God is, truths found in the pages of scripture -- truths men and women died for so that you and I would have the "right" to let the book gather dust on beside tables. May it never be so taken for granted -- for there is much truth in the maxim that those who do not remember, do not learn from history are doomed to repeat it.

Wolves is a jewel among Garrett's slim list of published works, a richly textured novel that immerses the reader in the world of 16th-century Germany. Terrifying, heart-wrenching, and challenging in its examination of lies sold as truth, this is a book that cannot help but change you -- if you let it. I particularly liked the touch Garrett weaves throughout the story of an actual wolf preying on livestock, a grim, appropriate foreshadowing of the evil challenge to come that masquerades as an angel of light. This is a powerful, challenging, extraordinarily relevant examination of how a few brave souls dared to stand on the infallible truth of God's word during one of the darkest chapters in history. Enter these pages with care, because the story within demands self-examination and change.
Posted by Unknown at 1:25 PM