Review: Salmon Fishing in the Yemen by Paul Torday 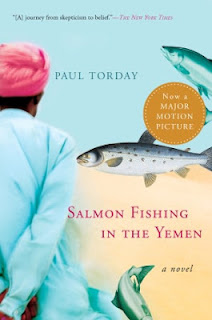 "Every so often a novel comes along that is quite original; think of Yann Martel's enchanting "Life of Pi"... [A] commentary on the value of belief to mankind. [T]hought-provoking and memorable." –The Economist

What does it take to make us believe in the impossible?

For Dr. Alfred Jones, life is a quiet mixture of civil service at the National Centre for Fisheries Excellence and marriage to Mary—an ambitious, no-nonsense financier. But a strange turn of fate from an unexpected direction forces Jones to upend his existence and pursue another man's ludicrous dream. Is salmon fishing in the Yemen impossible? Maybe nothing is.

Middle-aged fisheries scientist Alfred Jones lives a rather ordinary, quiet, unremarkable life until one day he receives a positively ludicrous, laughable request -- a Yemeni sheikh wants to introduce the sport of salmon fishing to his home country. Salmon in the desert? Impossible -- or so Alfred thinks, resigning the unorthodox request to the dustbin of extreme eccentricity. But Sheikh Muhammad is a visionary man who refuses to let the fact that something has never been done determine whether or not it is possible. And so the dream of salmon fishing in the Yemen takes on a life of its own as everyone from Alfred's supervisor to the Prime Minister's office seeks to leverage the story and its opportunities for their own personal and professional gain. Unwittingly drawn into this massive project that should be impossible, Alfred finds his eyes opened and his worldview challenged by the visionary sheikh's dream and the power of believing in belief, even when all hope seems lost.

This slim novel is far out side the norm of my usual reading picks -- but when the film trailers were released I couldn't resist checking out the book on which the movie was based. I think Salmon Fishing in the Yemen is quite simply one of the most intriguing, evocative book titles ever. Based on the film trailers I expected a sweet romantic comedy. And while the novel is infused with a healthy dose of humor, I wasn't expecting the biting social sarcasm, the bracing send-up of government bureaucracy and modern marriage, to name just a few of the subjects Torday tackles in his debut. Salmon Fishing rather defies categorization, and that's saying something in a world were Pride and Prejudice and Zombies exists. *wink* Torday's humor is subtler, his wit and insights regarding Western politics and the news media sharp and insightful.

The novel consists of e-mails, diary entries, transcripts and news articles. My favorite entries are those from Alfred and Harriet's (the latter being the estate agent that enlists Alfred's expertise for the project) perspectives. While I appreciated Torday's pointed jabs at government processes and the exigencies of the volatile political climate in the Middle East, where this story works best is in its examination of the struggles and heartbreak Alfred and Harriet experience while striving to bring the sheik's dream to fruition. Alfred's gradual, slow-burning awakening to the beauty and power of belief in belief, in the power of dreaming, is beautifully realized, and its a testament to Torday's ability to craft heart-breakingly realistic characters that I wanted more of them and less social commentary. Salmon Fishing in the Yemen was an unexpectedly poignant, at times melancholy (but sweetly so), a delightful, ultimately highly readable venture outside my reading norm that proved to be a powerful reminder of the power and importance of belief and faith to the human experience.
Posted by Unknown at 2:15 PM

I've been intrigued by the movie trailer, now you have piqued my interest in the book. I'll have to put it on my "to find" list.

Wow. This sounds beautiful. You have me considering the film now. I was going to pass on it but you have me totally rethinking that.

I'm glad the book was so good. Maybe we can still catch a showing of the movie sometime soon!

@Anne - I'm glad I gave this one a try! Some parts of it do drag a bit but overall it was a worthwhile discovery. :)

@Juju - Oh thanks! I am very excited about seeing the film!