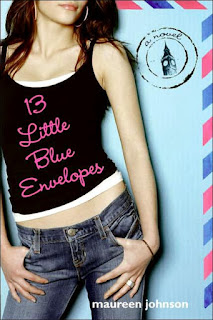 Inside little blue envelope 1 are $1,000 and instructions to buy a plane ticket.

In envelope 2 are directions to a specific London flat.

The note in envelope 3 tells Ginny: Find a starving artist.

Because of envelope 4, Ginny and a playwright/thief/ bloke–about–town called Keith go to Scotland together, with somewhat disastrous–though utterly romantic–results. But will she ever see him again?

Everything about Ginny will change this summer, and it's all because of the 13 little blue envelopes.

Ginny always viewed her eccentric, artistic Aunt Peg as the most daring, interesting member of her family -- a fearless and bold risk-taker, the woman who made the safer Ginny more interesting by association. When Peg's free-spirited ways led her to abandon her home in New York to travel throughout Europe, no one in Ginny's family was really surprised -- Peg always returned, sooner or later, bearing tales and souvenirs of her adventures. But one day, instead of Peg a package arrives for seventeen-year-old Ginny -- thirteen blue envelopes, the first containing $1,000 and instructions for Ginny to buy a plane ticket to London. The instructions are very specific -- bring minimal baggage and only open the next envelope when the task in the current letter has been completed. Accepting Peg's terms, Ginny gamely books her flight and heads for London, the first of many leaps of faith she'll be required to experience in order to follow her aunt's most unusual directive. Each letter, each requirement thrusts Ginny into the most exhilarating and scary journey of her young life, a pilgrimage to follow her aunt's footsteps throughout Europe. Along the way the letters test Ginny's resilience and force her to decide who she is and wants to be, the type of woman she stands on the cusp of becoming. All it takes is leap after leap of faith...

I've had this book on my radar for several years now -- the cover is adorable, the premise intriguing, and since I seem to be on a YA kick here lately I figured now is as good a time as any to read my first Johnson novel. The impetus behind Ginny's journey through Europe is a fascinating one, and given the apparent (and stark) differences in personality between Ginny and her colorful aunt, Johnson sets the stage for a rollicking travelogue adventure grounded in the unexpected and deep bond between two seemingly wildly different personality types. However (and I realize I'm probably showing my age here), I would've liked a touch more plausibility in the journey's set-up -- given the clear (and often valid) issues Ginny's mother had with her sister's lifestyle, I find it hard to believe that she would have sanctioned the trip given Ginny's age and the restrictions place on her travel by the letters. But fiction is all about escapism, and my issue with the set-up was quickly overshadowed by the promise of Ginny's adventures to come in the great European unknown.

Each letter serves as figurative key that unlocks a new chapter in Peg's life for Ginny to explore. Johnson keeps the action moving at a refreshing, brisk pace, introducing new characters and scenery every few days -- in that respect this novel is an armchair traveler's dream. The individuals that pepper Ginny's travels are incredibly engaging, colorful characters -- from the rather traditional, somewhat staid Richard who seems the complete opposite of Peg, to Keith, the charming university student/ex-thief (and creator of "Starbucks: The Musical") who finds himself the benefactor of Ginny's efforts to "fund a struggling artist." I loved Keith -- he was an absolute charmer, and his deadpan responses to Ginny and the eccentric nature of her trip provided some of the novel's funniest moments. Unfortunately, for a novel with such rich scenic potential and delightfully individual and quirky supporting characters, Ginny comes across as woefully flat for the first two-thirds of the book. She's just...there and it's hard to fathom how she seems so one-dimensional when compared to everyone she encounters. Thankfully, Johnson's brisk pacing keeps the plot moving forward, and the more Ginny learns about her aunt's life, Peg's hopes and fears, the more Ginny opens up and becomes a character I finally began to really connect with.

Despite some implausibilities and characterization issues, I enjoyed this introduction to Johnson's work. I loved the way in which the mystery of Aunt Peg unfolded further with each letter, a poignant testimony to one woman's reflections on her life and relationships, guiding Ginny to finally come into her own, balancing her aunt's hopes for her with the dawning realization of who she is and wants to be. I'm looking forward to Ginny's further adventures in the sequel!
Posted by Unknown at 1:46 PM

I read this book a few years ago. Don't remember a whole lot about it now except that I though it was a fun read, but not the best travel novel I'd read.

@Kate - I agree. I'm reading the sequel now and it is a big improvement over this one IMO (and I enjoyed this one, just to be clear!). :)