Now that I've officially joined the Blogger community, I'll be periodically reposting some of my older reviews from Xanga here. Ruth from Bookish Ruth was kind enough to let me join the Baker Street Challenge as a contributor. Here is my first review for that challenge (originally posted on Xanga in January). 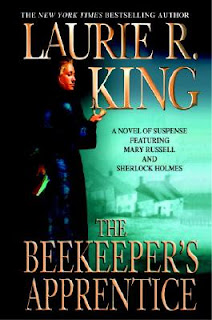 In 1915, long since retired from his observations of criminal humanity, Sherlock Holmes is engaged in a reclusive study of honeybee behavior on the Sussex Downs. Never did he think to meet an intellect to match his own - until his acquaintance with Miss Mary Russell, a very modern fifteen-year-old whose mental acuity is equaled only by her audacity, tenacity, and penchant for trousers and cloth caps.

Under Holmes' tutelage, Russell hones her talent for deduction, disguises, and danger: in the chilling case of a landowner's mysterious fever and in a kidnapping in the wilds of Wales. But her ultimate challenge is yet to come. Soon the two sleuths are on the trail of a murderer whose machinations scatter meaningless clues...but whose objective is quite unequivocal: to end Russell and Holmes's partnership - and their lives.

In The Beekeeper’s Apprentice, Laurie R. King introduces Sherlock Holmes to the most unlikely companion – a young woman with an intellect that matches the legendary detective in every way. Holmes is well-known for his lack of tolerance for the mental acuity of others – so for Mary Russell to have won his admiration, respect, and affection is a remarkable feat. This series needs to achieve two objectives to succeed – the character of Holmes has to be true to the canon and Russell has to be a true equal to him in mind and mettle. To speak to the first point – in my view King absolutely nails it in her depiction of Holmes’s character, voice, and mannerisms. I’ve read most, but not all, of Sir Arthur Conan Doyle’s stories, and I’m a huge fan of Jeremy Brett’s portrayal of the detective in the classic television series. For me Brett is the definitive Holmes – when I read Doyle, his is the voice I hear and the face I see, and the same applies for King’s incarnation of Holmes. King lets us see the “real” Holmes, devoid of the glow of “celebrity” that his good friend Dr. Watson applied (much to the detective’s chagrin) in the stories that documented his cases. Russell’s appearance throws Holmes out of his comfort zone and injects new energy into his personal and professional life. Plus, it’s wonderful fun seeing him cope with Russell’s maturation from a gawky teenager to a capable adult. Russell’s voice is the second half of the puzzle that makes this series a successful Holmes pastiche. By the age of fifteen she’s already been to hell and back through the loss of her parents & younger brother. The early tragedy informs her reaction to everything that follows, most importantly her developing relationship with Holmes. For all her hard brilliance, King allows us to see Mary’s vulnerable side – and since she is essentially the other half of Holmes, it provides fascinating insight into his character as well. Finally, the novel’s brisk pace and attention to historical detail results in a tale that positively drips with atmosphere. I particularly enjoy reading about Russell’s college experiences at Oxford and her interest in theology, especially her reaction to her first trip to her mother’s homeland, Israel. The world King builds here is a joy to get lost in, and the characters – both new and canonical – are so real, and such a joy to spend time with. That’s why I keep coming back to this series – the characters are multi-faceted and the world-crafting is so richly done, I feel like I take away something new from the story with each reading.
Posted by Unknown at 7:39 PM

I love Mary and Holmes! I can't wait to read the next book. Thanks for recommending these books to me. :)

This is the best review I've read of this book so far.

I just discovered this series earlier this year and I LOVE it. I'm almost through the 8th book and can't wait for the next one to come out!

Heather, thank you so much!